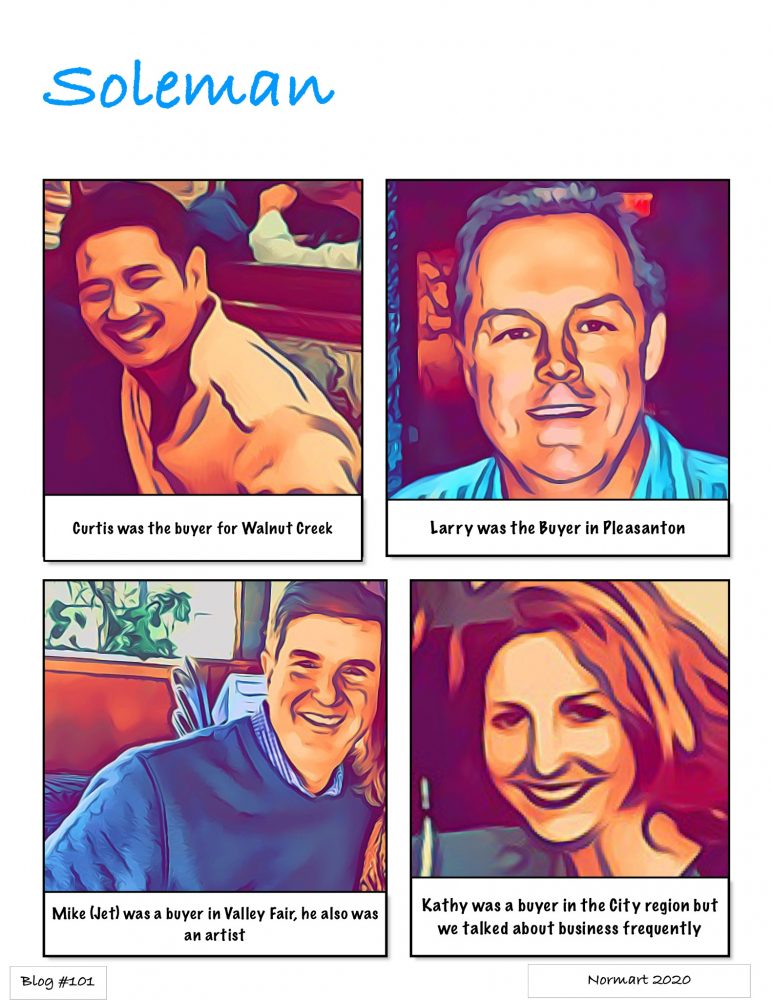 In Blog 100 I talked about how my influencers got me there. In this blog I want to talk about The other buyers I worked with in the Eastbay and one that was in the City region.

Curtis was my counterpart in the Walnut Creek store. He had a very laid back personality. Talk about  a great guy with a big heart. His business was usually pretty good, so I tried to learn how he was doing it. He told me he always checked out the other stores to see what the hot sellers were, much like how I found the Reseda style. Another thing, he was great at talking to people over the phone and trading styles that weren’t working from his store to theirs. Never really thought about the trading piece before. We would hang out after big regional meetings and have a beer or two as well.

Larry worked in our Pleasanton store. He had an amazing personality. If you were to ever meet the best salesperson of any given company, Larry would be that guy. Except he was a buyer in this scenario. He was handsome, funny and always had interesting things to say. His wife was the Store Manager in the Walnut creek store so they were Nordstrom tried and true. They would invite me to stay over their house for early morning meetings the night before. The drive itself was about 1-2 hours depending on traffic so I appreciated the hospitality. Pleasanton was a combined floor so Larry did more than just Brass Plum.

Mike worked in our Valley Fair store and was an artist on the side. He always had high energy and was quite the character. Plus he had a really nice business on the side making signs for local businesses.  Mike had a great sense of humor, I always enjoyed our conversations as he would make me laugh quite frequently. He had a good business in the Valley Fair store as he had a good eye for hot sellers and knew had to maximize them. We had great conversations “talking shop”. We had the same mentality on this subject. Little did I know that we would be working closely with each other at a future date.

Kathy was a buyer in the City region which included 4 stores north of our area. We were all part of the Nordstrom Northern California region. Kathy was relatively new in her job as well, so we had quite a few conversations talking to each other about our experiences. It was great sharing thoughts and concerns from someone who was experiencing the same things I was and we helped each other a lot . She was easy to talk to and we would trade items that would benefit each of our stores as well. We wouldn’t see each other except for when we had the big regional meetings.

This part of my career is where I learned that talking to other buyers more frequently was very beneficial. It’s always good to network with other buyers to see what is going on in another store. This way you can tailor it to your store which is what I did.