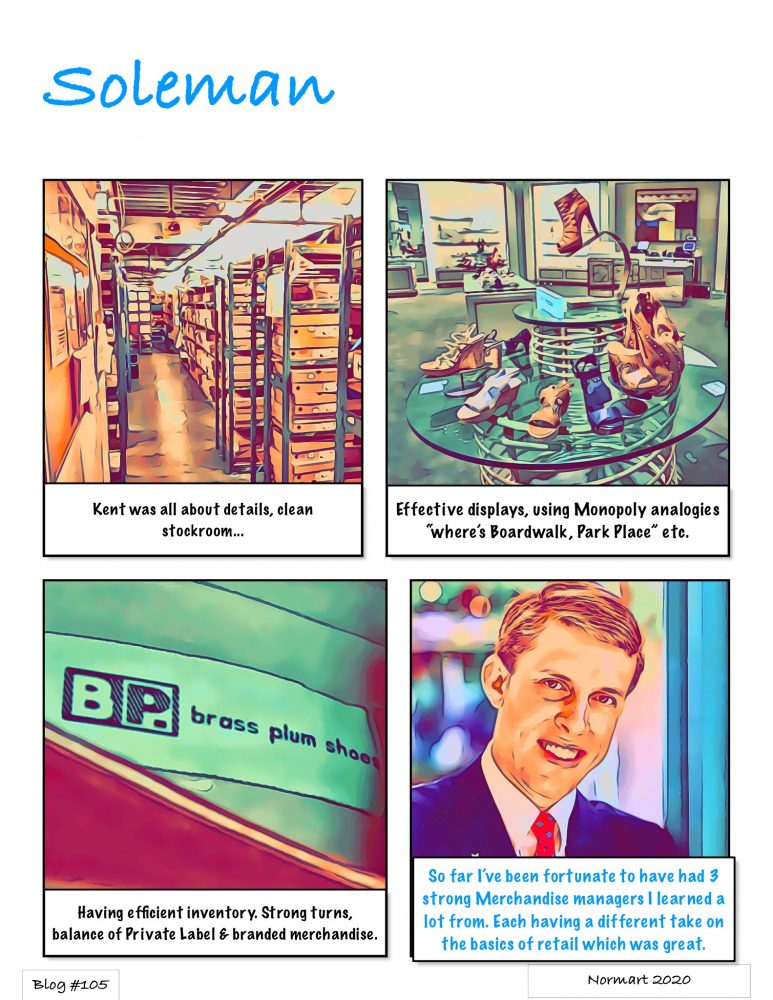 In Blog 104 I talked about communication breakdowns and how detrimental they can be. In this blog I want to talk about Different Styles to learn from

So I had a great Merchandiser in the Kid’s area and was lucky enough to have three strong Merchandisers in the Women’s area as well. All of them had different styles and I learned from each of them valuable lessons in my career.

Rob was kind of a super hero type, larger than life. Loud, sometimes a little abrupt but still lovable in his own way. His big thing was driving the business. Narrow and deep. I learned a ton from him.

Mike was cool and collected. Kind of laid back but had high expectations. Never saw him mad or upset. Was usually pretty jovial and would take the time to listen and coach. He was on the fast track. he had a good disposition which people liked.

My new RMM Kent, was all about the details. Clean stockroom, effective displays, having efficient inventory. Strong turn, good sell thrus, balance of private label and branded. Everything was thoughtful. Always had an analogy. Liked to make me think.

“So where’s Boardwalk?” He would ask. “Huh?” I would answer. “Every place on your floor has a certain value, like the Monopoly game” The most valuable place is Boardwalk, so which table is the most valuable. I would look at my floor. The mall entrance probably had the most traffic so one of those three tables would be the most valuable. I started using that analogy when setting the floor. It worked pretty well and was so simple.

Private label brands would often have extended sizes I couldn’t get in the branded area, so I liked placing some of those to round out my selection. Plus the NOL (Nordstrom own Label) team were a great bunch. Chuck, Gary and the infamous Harry. Loved it when he would get all excited about a style and comment “It’s like shooting fish in a barrel!” Some buyers would carry too much of the private label brands in order  to be political but Kent liked everything to be balanced.

Sometimes Kent would go off on tangents though. He was a deep thinker. Sometimes too deep lol. “Mike there’s a massive planet in the universe” (I honestly can’t remember the name, let’s say Planet 9), “A Coke can would be ten stories high”…pause…pause…wait for it…”And someone would be carrying it”. A giggle would ensue. Again I’d say “Huh”. He would then go into “it’s just fascinating that there are so many things out there”.

Kent was great though, I learned a lot from him, enjoyed his company and just genuinely liked being around him. He was positive and had a good sense of humor. And he made me think…