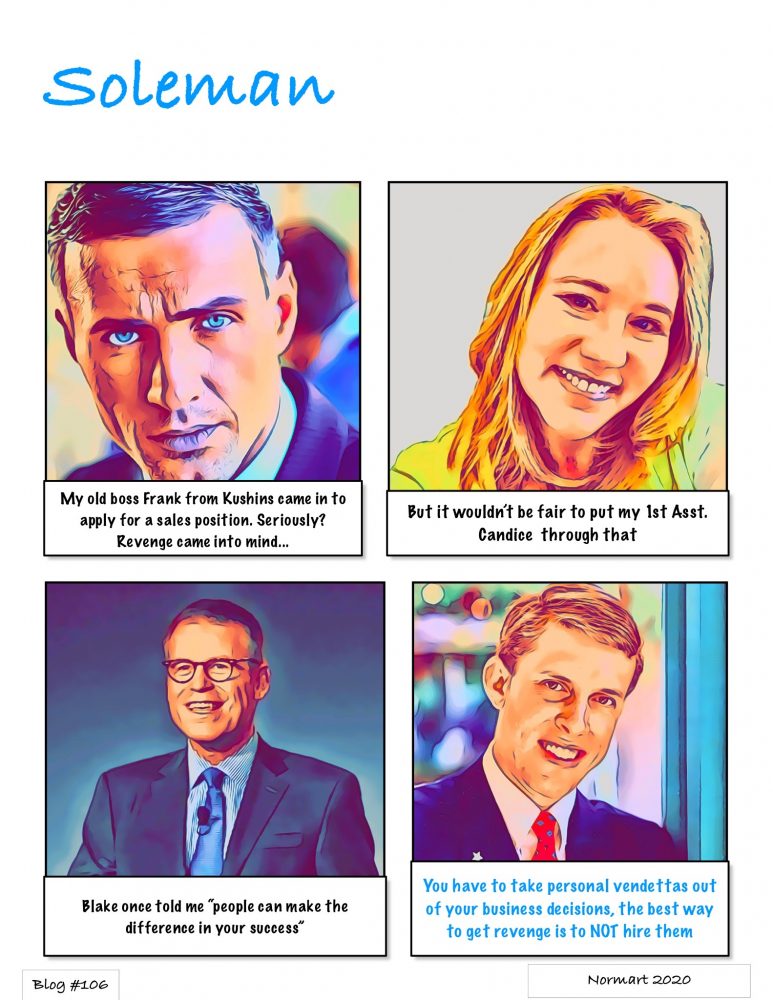 In Blog #105 I talked about Different Styles to learn from. In this blog I want to talk about How I realized revenge wasn’t so sweet after all.

I was learning a lot from my new RMM and incorporated the past knowledge I learned from my other mentors. Things were going really good. Had a great team, business was great as well.

So I’m watching the floor and out of the corner of my eye I spotted someone who looked like my old boss Frank. To refresh, this guy was brutal. No people skills, every visit was like I was on trial. He would make you feel really small and made sure you knew he was the boss. He was coming my way.

“Mr. Normart…” he said with a forced smile. I had butterflies in my gut. I did not like this guy. He treated his employees poorly and when I left Kushin’s a huge weight lifted off my shoulders. “Hi, Frank, how’ve you been?” He was looking for a job…I told him to fill out an Application and I’d see what I could do.

The thoughts that went through my mind. Hire him and then its payback time! A cruel smile appeared on my face which I immediately wasn’t proud of. I talked to Candice and Aaron about it and asked what they thought. They said it was up to me because it would be awkward for me and not such much for them.

I went home that night with so many scenarios racing through my mind. I remembered a Blake visit in which he said “People can make the difference in your success”. It was so true…I had a great team and we enjoyed really positive results because of it.

The questions that were dancing in my mind:

My better sensibilities took over. I could hear Rob just saying one word, Dude…Mike would just give me a look of why? and not sure what Kent would have done. Kent was pretty sensible though and it probably would have turned into a long conversation. Gail would have given me a short laugh, like are you nuts? Martha wouldn’t even qualify it, probably say “Seriously…”. My dad would have said what Blake said, People…

The mentors won out this time. It was like having Obi Wan Kenobi on my shoulders. Wasn’t worth the effort. He never followed up either. He was probably thinking along the same lines, why bother. This was a good lesson for me. Personal matters should always stay away from business decisions.