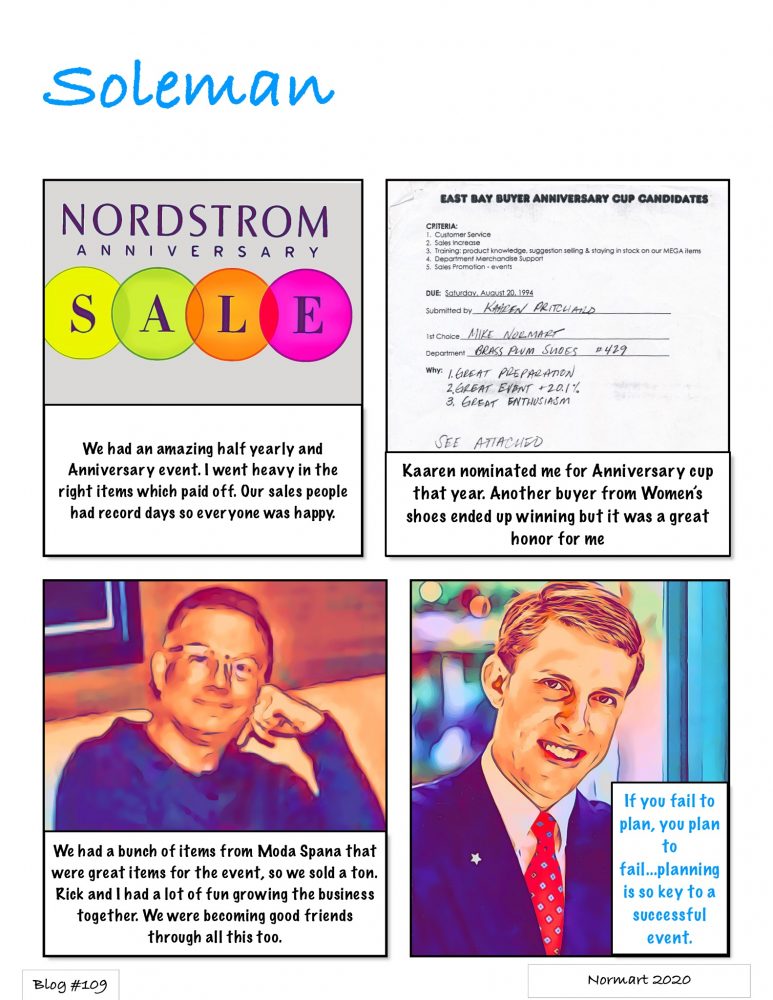 In Blog# 108 I talked about having a vision. In this blog I want to talk about the old saying “If you fail to plan, you plan to fail”.

This brand was doing great. Rick added extra sizes and widths that turned out to be great sellers in the juniors world. It was especially gratifying for me as I was the Lead for the brand corporately as well. We re-colored the hot selling “Reseda” in great metallics and beautiful suedes. We had a whole collection of this brand now as it kept getting bigger and bigger.

Rick and I, in the process, were becoming good friends. I never let that get in the way of making the right decisions for the department, though it was fun to share the success together. We would go out to dinner when he would come to town as we both were “foodies”.

Rick would go on trips to Europe and come back with hundreds of photos on fashion he saw there. Then he would come up with great designs for the brand. He was really talented in that regard.

Kaaren nominated me for “Anniversary Cup”. I didn’t win the honor, but it was nice to know she thought we did a great job. She was impressed with our preparation, enthusiasm and results. My question was how did I lose having a 20% increase? All kidding aside it was a great honor.

The key to any event is being prepared. From the buys themselves to all the little things that create success. Employee knowledge of the product, having the right amounts by size and color. I think I’m sounding like a broken record on some of these topics, but in retail its really a few basic fundamentals that work, you just have to be focused.

Finally having an organized stockroom is so important,  “If you cant find it, you can’t sell it”. Seems like that was a Rob saying…