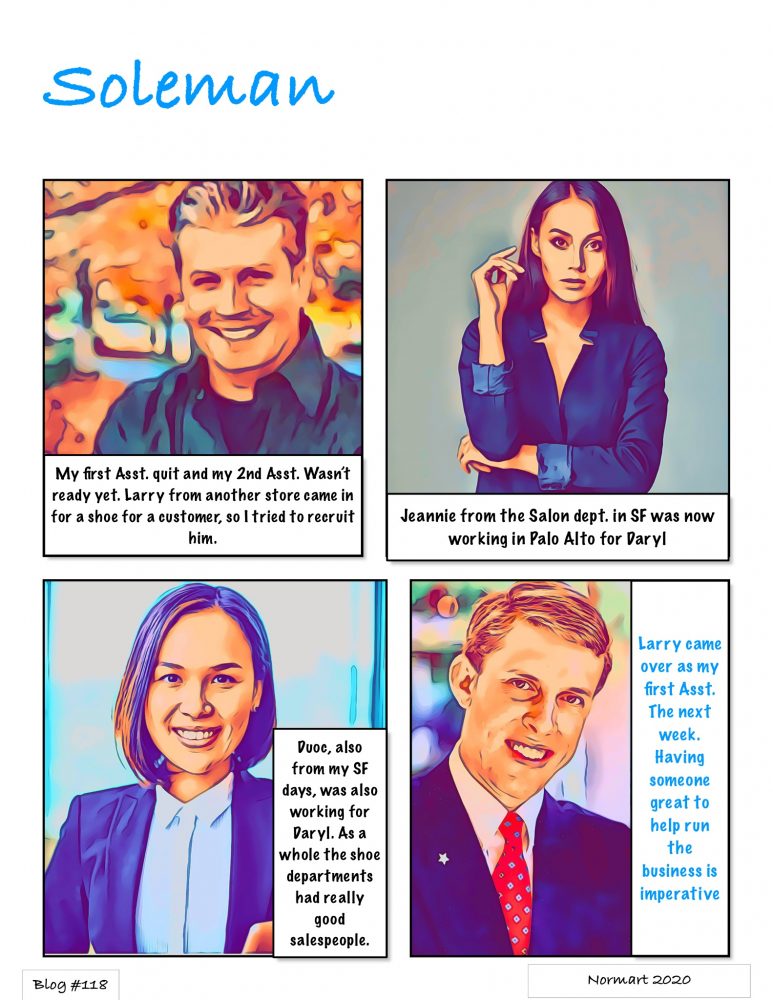 In Blog 117  I talked about Building a great Palo Alto team. In this blog I wanted to talk about The importance of having a great “Right Arm” to help you out.

The floor was starting to gel and business was starting to get better in the process. My First Asst. Came in and informed she was leaving. She felt she wasn’t making enough of an impact and things were too stressful for her. I had worked with her before as she was a Pacesetter in Arden Fair when we opened the store. I knew she was capable but wanted to support her in her decision.

Meanwhile Daryl was upgrading his team too. Jeannie and Duoc who I had worked with before in San Francisco were now on his floor. Terry had made some great hires too so overall the women’s footwear group was looking pretty good.

I decided to go into the stockroom and found a guy named Larry checking on some shoes for his customers. He was from the Stonestown floor. We started chatting about different things and we hit it off right away. I started thinking “This guy could be be a great addition as my First Asst.”. I started asking him about his goals and different things like that. I told him I was looking for a First Asst. and if he’d be interested. He seemed interested so I told him to sleep on it.

My Second Asst. wasn’t ready for the position. He was a good guy just needed some time. I needed another person like Candice or Aaron as a right arm. The nice thing about having someone you click with, is you don’t worry about things as much. If you can have the same vision and excecute it together , bonus.

Larry called me the next day and said he wanted the position. I called Scott and firmed everything up. Larry would start The beginning of next week. I was super happy as I really liked him and thought we’d make a great team.

The second piece of this is I thought he would be someone I could really mold. I loved getting people to the next level. The most rewarding thing for me is to see someone I’ve coach succeed. There is no better feeling. When Alberto from Nordstrom Arden Fair told me I made a difference in his life that meant so much too me. It inspired me to create more moments like that.