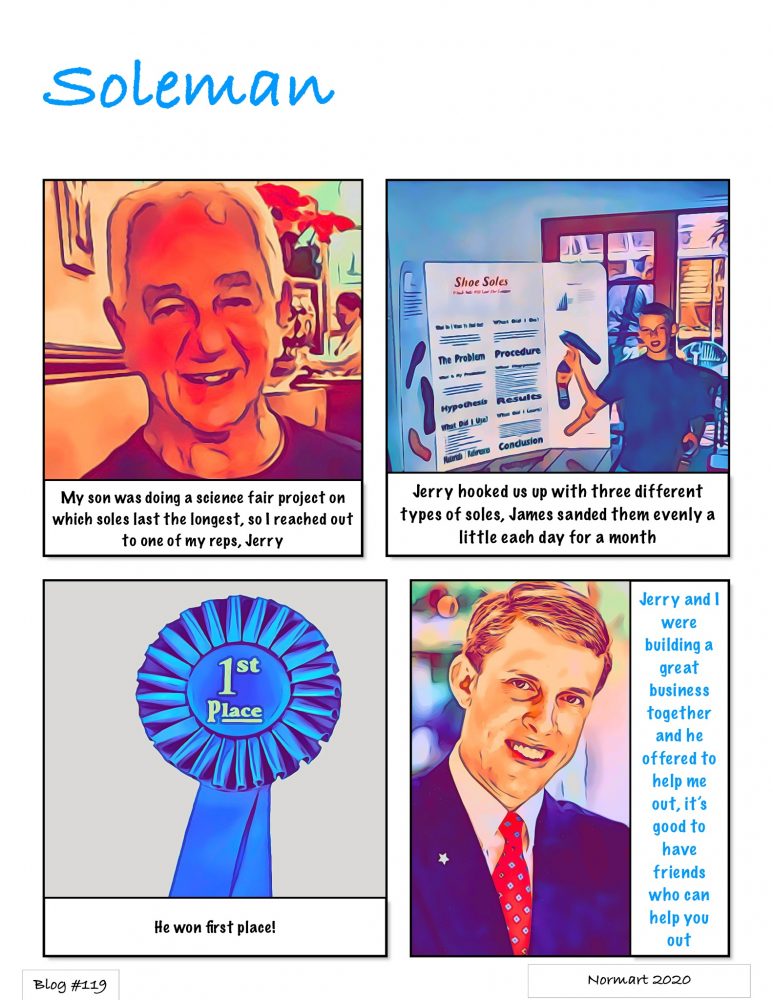 In Blog 118  I talked about having a great “Right Arm”. In this blog I want to talk about having great vendor relationships’

Growing up I felt my dad “knew everything” about most subjects. He could fix anything. Plumbing, electrical, yard stuff you name it. If the lawn mower went out, he’d fix it. He wouldn’t even think about calling someone except maybe his dad. My grandpa was my dad on steroids.

So now I’m a father. I could fix somethings, put in a few ceiling fans which I was proud of. Laid some cement which turned out pretty good. Tore a fence down and put a new fence in with cement anchors. I also did more damage on the plumbing side though, so I left that for the pros.

WeBut I wasn’t prepared for my sons first science project. James comes up to me asking what he should do. Now when I say first Science project I meant “Big science project”. Not the “electro magnet type”. This one had to have a Problem, Procedure and results.

Well at this point the first thought that came to mind was “shoes”. Why don’t you see what types of soles would last the longest? It just came out…Where was I going to get some soles now I chuckled. I didn’t want to disappoint James so since I had an appointment in the afternoon with my Callisto Rep Jerry, I thought I’d ask him for advice.

Jerry comes in on time as usual. We had a great relationship we had developed not only from this store but the other Nordstrom I had worked in as well. Jerry was very well known in the Bay area as being a really great rep. He would come in to take sizes and create a reorder on the stuff we needed. He never tried to shove pairs down our throat but instead treated it like his business which I appreciated.

We take care of business and head out for lunch at my favorite local lunch place. As we were eating I asked if he knew where I could get a hold of a few different types of soles so I didn’t have to use some of my own shoes. I can make that happen for you, give me a few days. I told him the timeframe and he said he’d get back to me soon.

The next day Jerry calls and tells me he has three different types of soles coming my way. A leather sole, man-made and poly bottom. They arrived rather quickly so James could now start on his project.

My son laid it all out by:

Problem: Why do some soles wear out faster than others?

Hypothesis/Procedure: He would take sandpaper and sand each sole for 5 minutes each day. His guess was the mad-made sole would last the longest because it was the hardest.

Results: The Poly bottom lasted the longest and the leather sole wore the fastest. He won First place in the Science Fair.

I think Jerry and I both thought we were the winners. I because I delivered to my kid what he needed for his project and Jerry because he helped a friend out. I really appreciated his help too.

The point of this story is you should always treat people like you would want to be treated. By treating reps fairly and with a true partnership you build a friendship. In negotiations and times of need the other side is more willing to work with you if it’s a two way street. Jerry and I had a great relationship because of this.

One thought on “Blog #119 Having Great Vendor relationships”