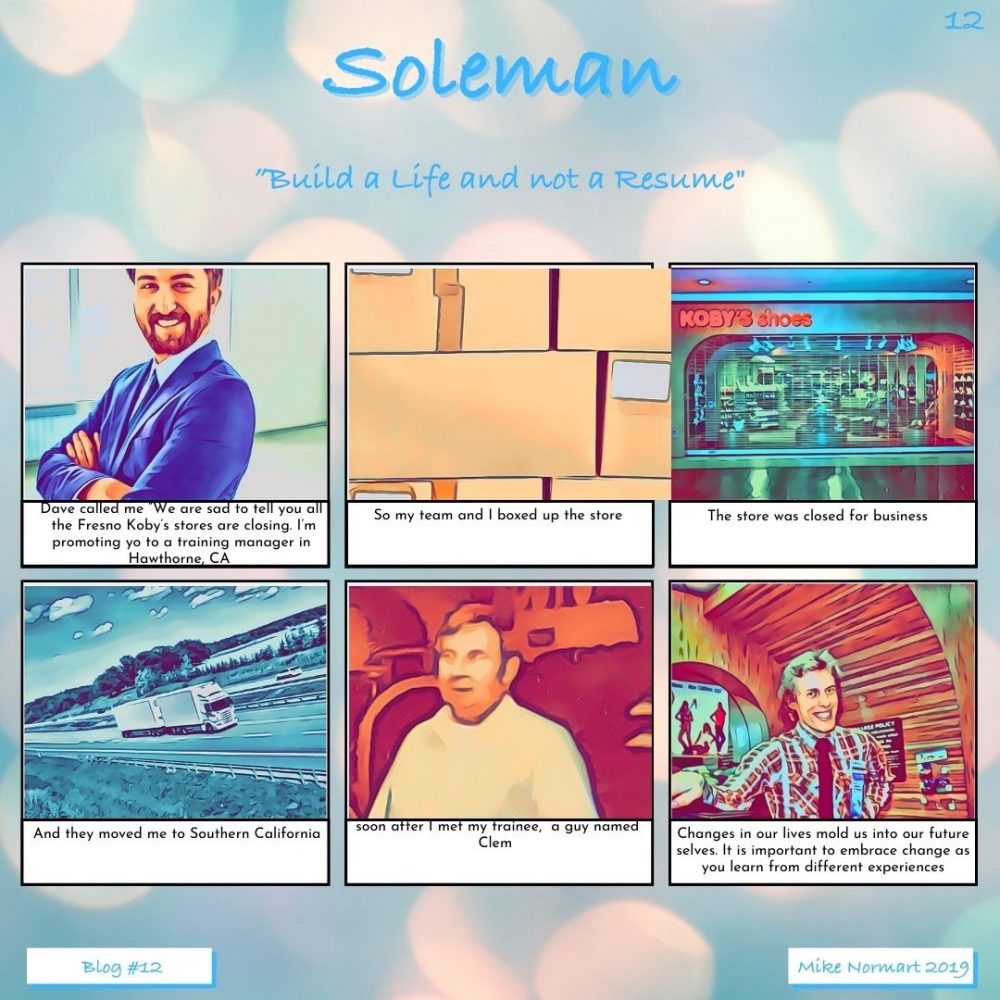 So, in Blog #11 I talked about how to handle hostile customers. In this blog I want to talk about how to Build a Life and not a Resume.
One afternoon Dave calls me and wasn’t his jovial self. Usually he’d start the conversation with some humor but this time he got right to it. “Mike, they are closing all the Fresno locations, I have something lined up for you in Southern California. In fact it’s a promotion as you’d be a training manager there”.
My first thought was: “What about my team here or at the Belmont store?” Instead I asked him, “ What about Leanne and Dee?” Leanne was going to get an offer too, somewhere… Everyone else would have to move on their own if they wanted to stay on board.

My Life so far

Wow, I had lived in Fresno all my life, so this was a little scary for me. I had been guilty of being a “Forever Fresnan”. So what does this mean for me? I was in my twenties now and had not really ventured beyond my home town.  Los Angeles? It’s so big, so many people and the traffic!  This would be an adjustment for sure…
All my friends I had grown up with and went to high school and college still lived in Fresno. What about all of them? Eddie, Craig, Brian “the rat” Willard.  We would hang out on the weekends together. Would I ever see them again? Would they come to visit me? Bryon had moved out of town so I had a different roommate now, how would he take it?

Build a Life not a resume

It might look like I did build a life in Fresno. When I say build a life and not a resume, I mean there are so many things to experience. Yes I experienced some pretty cool things so far but all in Fresno!
I told my team the next day that we were going to pack up the store and ship out all the shoes back to Columbus, Ohio. This is where the Kobacker inc. Headquarters was located. My team took it well; in fact they suggested we pull an overnighter and get it over with.  They wanted to  have the rest of the week to look for work. I brought a case of beer, so after we finished we could celebrate each other and say our goodbyes. We had some good laughs reminiscing on all the good times and crazy customers we had.

Monday was moving day for me, so I had the weekend to hang out with my friends. My roommate Harold decided to go too, as he knew someone in Southern California who offered him an Iron worker job walking beams and building the frames of buildings. Being afraid of heights I couldn’t imagine doing anything like that.
The company put me up in a hotel for a month so I had that amount of time to find a place. We found a house right away and since I loved dogs I bought a Siberian husky which would be allowed in the house.

I went to the store the next day and met Al the District manager. He was well dressed and was the type that invaded your space when he talked to you. He either drank alcohol in the morning or had smelly cologne, could never figure out which and called everyone “Bubba”. “This store has a theft problem & people quit all the time Bubba, you’ll have to figure that one out” he said. “Here we go again”, I thought to myself.
My first Store Manager trainee Clem started this week, so I got him started on his workbook and gave him the responsibility of closing the store. He also had to work 6 days a week, so I would close the store on his day off. He was a good guy with a lot of retail background. He was a stocky guy about 5’10” and and in his 40’s. I met the team, Alice, Alicia, Becky and Gladys too. There were a few others I’d meet in the coming days ahead.
“Build a life and not a resume” . This is so true, I had lived in Fresno all my life. Hung out on the weekends with my friends going to “Rocky Horror Picture show” at midnight or going to the country racing our cars.
I had a 73 Gran Torino and my buddy Bryon had a GTO “the goat”. Another friend, Barry had a new 240Z. so we drank beer and raced our cars. Never went to Los Angeles before and didn’t know what to expect, pretty sure It wouldn’t be the same without all my friends but I would grow as a person that was certain. Life experiences mold us into the person we become so change is good for personal growth.