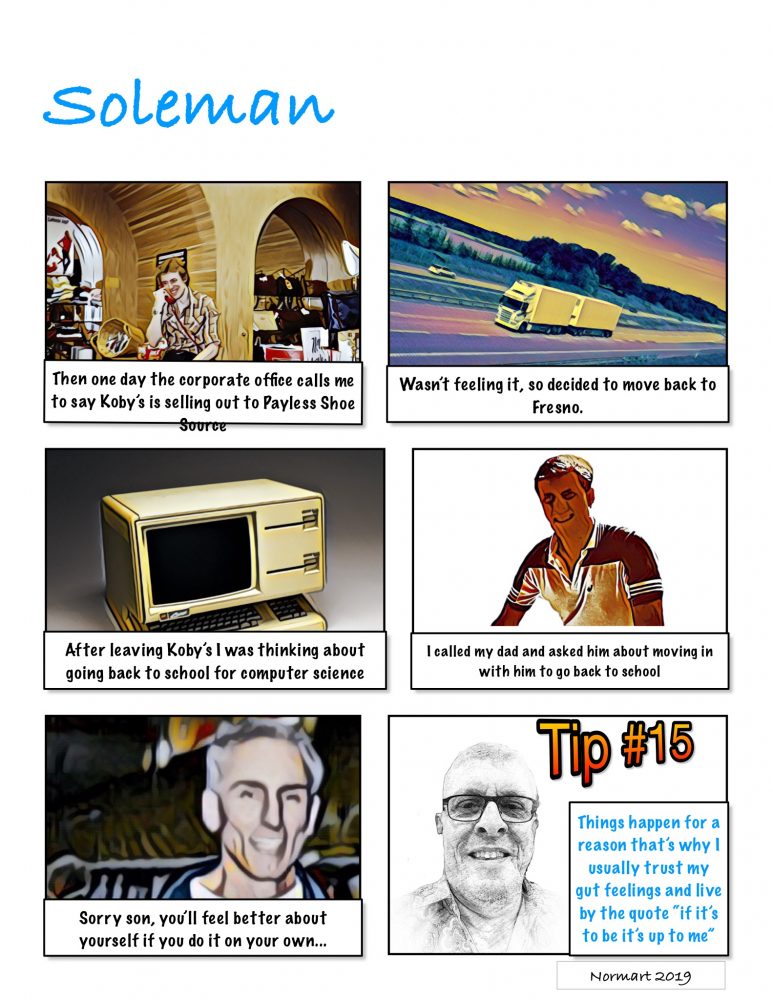 Solemanstudios – Blog #15:
So, in Blog #14 I talked about how to deal with a bad manager, in this post I want to talk about how my dad taught me how you need to make things happen for yourself and don’t count on others to help you out.
“If it’s to be, it’s up to me”
So six months past since Al got fired, Clem had settled into his store and we would talk during the week sharing stories on  how to deal with certain things. We  had a great working relationship.
One day, I get a call from the VP of operations from corporate and he says “I’m calling you to let you know we sold to Payless shoe source and you have the option to stay and work for them or take a severance package”. I stood there stunned. Why is it when things are going good the bottom falls out? I have always believed that things happen for a reason and maybe it was time to move on.
Over the last few years I just didn’t gel with LA except for my job, I loved my team and the store and made a few friends outside of work but just wasn’t feeling the vibe. I decided to take the severance package and move back to Fresno.
So right after I decided to leave Koby’s/Payless Shoes source I thought I might want to look into getting a degree in Computer Science. My dad had moved to Idaho and was on his second marriage. I didn’t particularly like his second wife but I was close to my dad and thought it would be nice to be closer to him and get the degree in this new field everyone was talking about now.
I called him up and he said he’d have to check with his wife first, he seemed a little funny about it though but we were pretty honest with each other so I was sure if he didn’t want me to come up he’d just tell me. A few days went by so I called him to see what the status was. He said that he was okay with it but “she” wasn’t. “So I guess thats a no then” I said. He said “I’m afraid so.”
He said I’d feel better about myself if I figured out how to do it on my own. He then said “ you have to do what’s best for yourself in this life, you only have one life to live on this planet” “and what’s best for me is to make sure my wife is happy with all the decisions and she wasn’t in this case”.
Ok then…
At first I was a little butt hurt, my dad left the family right when I graduated high school and seemed more interested in his new wife than his kids. My mom didn’t make it easy for him though, so it was kind of hard to understand his real viewpoint at the time.
But for a few years none of his boys wanted anything to do with him…He said “One day you will all understand and we can have a life together again”.
One day I woke up and decided I wanted, actually needed a relationship with him. He had always been my mentor and I still needed him for guidance even though he wasn’t there financially for me.
In the long run it made me a better person and made me live by the quote “If it’s to be it’s up to me”.
I also decided to stay in the footwear industry.
I got a seasonal job right away in a shoe department, then got a call from a guy named Jim about an opportunity for a full time permanent position at a store called Rodders that could lead to management down the road. I accepted the position…
Tip: things usually happen for a reason and you need to learn to trust your gut on what’s best for you. If I stayed in LA I wouldn’t have been happy in the environment and would not have had this new opportunity at Rodders. You also have to take control of your own life .
“If it’s to be it’s up to me”.