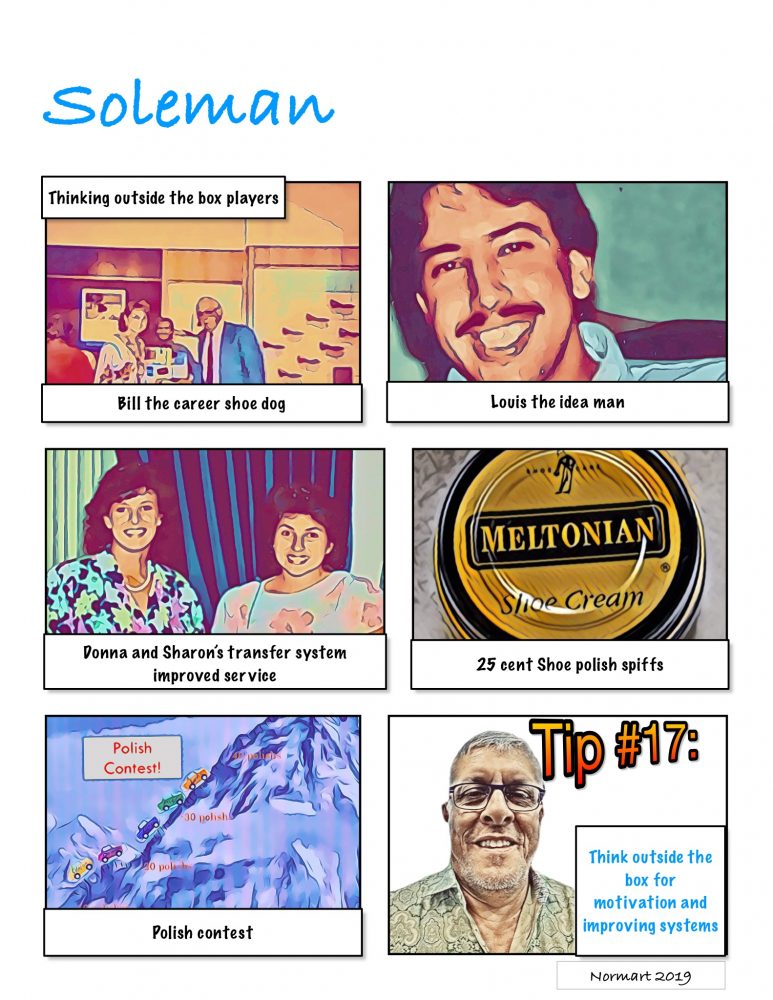 So, in Blog #16, I talked about the phrase “ knowledge is power” and how to use it to your advantage to improve service. In this post I want to talk about “thinking outside the box” to motivate people and to improve systems.
So I had started in the Manchester Rodders store, Jim was the District manager and managed the Manchester store and he also had a department manager in the Fashion Fair mall store.
The rest of the team at Manchester consisted of four main salespeople, Bill a guy in his 50’s who had been in the shoe business most his life, Louis a great salesman who also had a fireworks business on the side and two college students Sharon and Donna.
One day, we had a sales rep from Meltonian shoe polish come in to stock the supply and offered 25 cents per polish that we sold and put “spiff” stickers on each jar so when we sold one we took the sticker off and put it on a spiff card. She tallied it up at the end of the month and we earned 10-20 bucks extra if we sold enough of the polish. This inspired me to create a contest to keep track of how everyone was selling the polish to motivate people to sell more. I drew a mountain on a poster board and everyone had a car that would move up the mountain each time you sold one.

It was a fun contest that inspired our competitive juices to flow. I can’t remember if Jim kicked in anything extra for the winner but we had fun with it in any case. This inspired me to utilize contests as a motivational tool later in my career. Funny thing, I was talking to Louis (yes, we have remained friends since Rodders) the other day and he has used similar contests too with his teams.

So our team became closer as time passed and we frequently went out for beers after work. Sometimes Bill and I would grab a beer or two, other times just Louis and I and on rare occasion the whole team would go as Sharon & Donna had homework to do usually. Bill was dating someone he was serious about at the time so most of our conversations were around her but we would also talk about our shoe careers and how to improve things in the department.  I learned a lot from him with those conversations.  Little did I know the lady he was dating would  be my future mother in law one day…

One night, Louis and I were talking about how the transfers took so long to get to the store. Louis said “too bad Donna and Sharon couldn’t just bring the transfers to each other at school since they both went to Fresno City college and Sharon lived near Fashion Fair”. We both turned our heads toward each at the same time and looked at each other for a minute. “That’s brilliant” I said, “let’s ask Jim”. With Jim’s blessing we created a faster “transfer system” which got the shoes quicker to the store for our customers.

Tip: It’s always great to think outside the box to motivate people and come up with creative ways to improve systems. We had a simple contest that didn’t make anybody rich but sure created a healthy competitive atmosphere to have fun with. This opened up our communication with each other that lead to putting our heads together to improve a lengthy transfer system to better serve our customers.