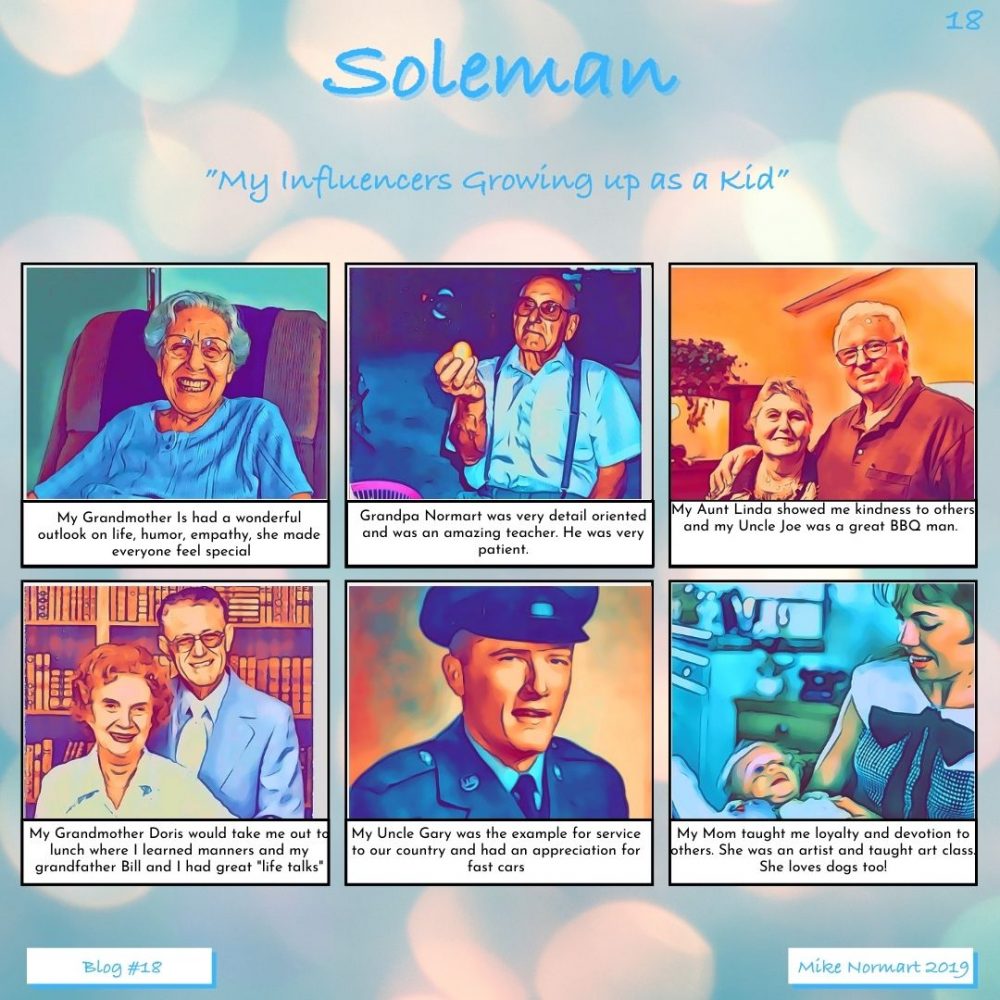 So, in Blog #17,  I talked about that Things happen for a Reason. In this post,  I want to talk about My Influencers Growing Up as a Kid. It’s hard to capture the essence of all these wonderful people in a paragraph so hopefully I do them all justice.

Grandma Si made all her grand kids feel like they were the favorite. She was amazing. Seriously she was the most incredible person I’ve ever met. Talk about the best Armenian food, from grape leaves to pilaf which I still try to replicate now. Always in a good mood except when grandpa would beat her at cribbage.

My Grandmother was gentle, kind and very attentive to listening to you no matter what age you were. When we went to the cabin my brothers and I would want to go fishing, my grandpa in a very gruff voice would say “ you can’t catch fish in this lake right now”. My grandma in the most calm and compassionate voice would say “oh Bill, take the boys fishing”,.

He akways did too.  She taught me the box step one afternoon ( which to this day is the only thing I’m confident of lol). Many years later, I danced with her at a wedding and she asked me how I learned this step.  I proudly told her “ you did grandma”. It made her proud.

Wonderful outlook on life was her trademark, humorous always. She was empathetic to others and made everyone feel special. My grandmother called me every Sunday at 10 am. The call would always start out with a “Michael…” in the most cheerful voice you could ever hear.  She did this until she passed away at the amazing age of 95. I miss those talks.

Grandpa Bill Normart was all about the details. My Grandfather was a machinist by trade, which I always found fascinating because his hands were so big. Picture an old timers catchers mitt with the big fingers and that was his hand. Yet he could do the most intricate detail.

He would always explain everything he did, he was an amazing teacher. Part of that also was he had a very gruff voice sometimes. Seriously he would scare the hell out of you when he raised his voice but he was also a gentle teddy bear.

Every Easter, the family tradition was to color Easter eggs for the egg fight. You had to color your own hard boiled egg. The rules of the game was one person would hold the egg with just the top showing. The other person would tap it. If your egg cracked you were out. You had both sides of the egg you could use before you were out.

My Grandfather loved this. He would hold the egg in his big hand and you could barely see it. He would laugh his signature laugh. Think of the cartoon  “Dick Dasterdly and Muttly”.He had the same laugh as Muttly.

One stay he taught me to clean a fish, bait a hook, split wood, use a jig saw to cut wooden fish and bears for his cabin. He also played a mean game of horseshoes. I spent a lot of time with him every summer at their cabin at Huntington lake. I think fondly of those summers even now.

My Uncle Joe was always someone I looked up to, mainly because he was huge. Just a big muscular guy who loved the outdoors. Definitely a gentle giant and man could he bbq! My Uncle  would make the best tri-tip ever. He never raised his voice except if there was a story going on he was passionate about.

His career was at PG&E and did well for himself. His mindset was work hard and it will pay off. It worked for him as he could do all the things he loved. I always admired him for that and think part of my work ethic I have now I learned from him too as well as my dad.

My Aunt Linda is the nicest person I’ve ever met. She is always calm and has the personality that always makes you feel loved and welcomed. She was very close to my dad so we saw each other frequently growing up.

She’s the type of person you immediately feel comfortable talking to, which is why she can talk to anyone with ease. I learned a lot from her on how you should treat people with kindness. Always thoughtful of others especially around the holidays. She is an amazing cook as well, keeping with the traditional Armenian cuisine my grandmother would make.

My grandmother Doris taught me to enjoy life. My grandmother usually played second fiddle to my grandfather who was a master story teller. She would sit in her recliner and give me a  nod for truth or a shake of the head for “not so true”.

Usually once a month she would call me up and ask me to go on a “date”. I was only 8 at the time this started but it went through my teenage years. We would go to lunch at a nice place like the Velvet Turtle and a movie.

My grandfather didn’t like to go to the movies so this was her way to do something she enjoyed. We would talk about life stuff and all her adventures since they travelled extensively.

I spent a lot of my time with my grandpa Bill “Doc” Osterholtz working on cars. Like I mentioned above he loved to tell stories about his years as a veterinarian for the federal and state government. When I was younger our interactions were mostly just listening to grandpa telling his stories in the house.

When I got my first car he helped me work on my car with tune ups. Finally when I got the 73 Gran Torino it was rebuilding a hot rod. We would first go to the auto supply store where he would flirt with the young cashier which was awkward and embarrassing.

We would get our supplies then go to his garage. He would always light up a cigar and explain the whole process. I learned to work on cars in large part because of him and he had a great sense of humor. His favorite stories were when he was dating my grandmother. He would take her with him when he had to inspect cattle.

Apparently my grandmother was a free spirit and a little headstrong. He told me on several occasions about how he was inspecting a bull and told her to stand off to the side or the bull might go after her. As you could imagine she was running for her life moments later and luckily was fast on her feet. We would always have a good time in that garage sharing laughs and stories.

My Uncle was a lifelong Air Force man. He lived in Texas so I didn’t get to see him as much as I would have liked. He had many stories like my grandfather and his, were mostly around his travels in the Airforce and fast cars. His car stories were so interesting, I think I got the Muscle Car bug from him.He was a great guy and I looked up to him with awe, being a dedicated servant to our country.

His wife was really easy to talk to and like my grandmother, let my uncle do most of the talking. I’m sure it was different at home. They had a daughter, Shauna who also lives in Texas today. Sadly my uncle passed away at an early age from MS and his wife from diabetes.

While my Father was my mentor as I explained in blog 14, I learned alot from my mom too. She was very artistic being a Teacher for art class in Fresno. Unfortunately she let her credentials expire but she still enjoyed painting.

She was also talented in making flower arrangements. Mom made all the decorations we had in our house. And they all looked amazing. My brother Dave and my son James must have recieved her Artistic gene as they both are artistic too.

My Mom was very loyal to my father and later was my brother Doug’s champion when he got into mischief. Always there for him no matter what. Probably some interesting stories she hasn’t told us yet and not certain I want to even know.

Enchiladas and Meatloaf were my favorites that my mom made. Her Enchilda casserole will end up on my website as part of the favorite recipes tab. It’s still one of my favorites.

She was a “Shoe Dog” for a minute. She finally worked as a shoe salesperson when my parents got divorced. She sold kid’s shoes at a Stride Rite store. Her stories were pretty comical because I lived them too in my own career.

Muttly was our family dog growing up and the bond between my mom and her was unbreakable. More than likely, it’s what kept that dog around for 16 years. Mutt had a comical personality just like my Mom so they were perfect for each other.

Part of growing as a person is learning from the people you are close too. My Influencers Growing Up as a Kid doesn’t do them justice. But I lived it and the memories are still fresh. Memories can be good or bad sometimes and fortunately for me, most of mine were good. I learned different things from all these great people and it has helped mold me into the person I am today.