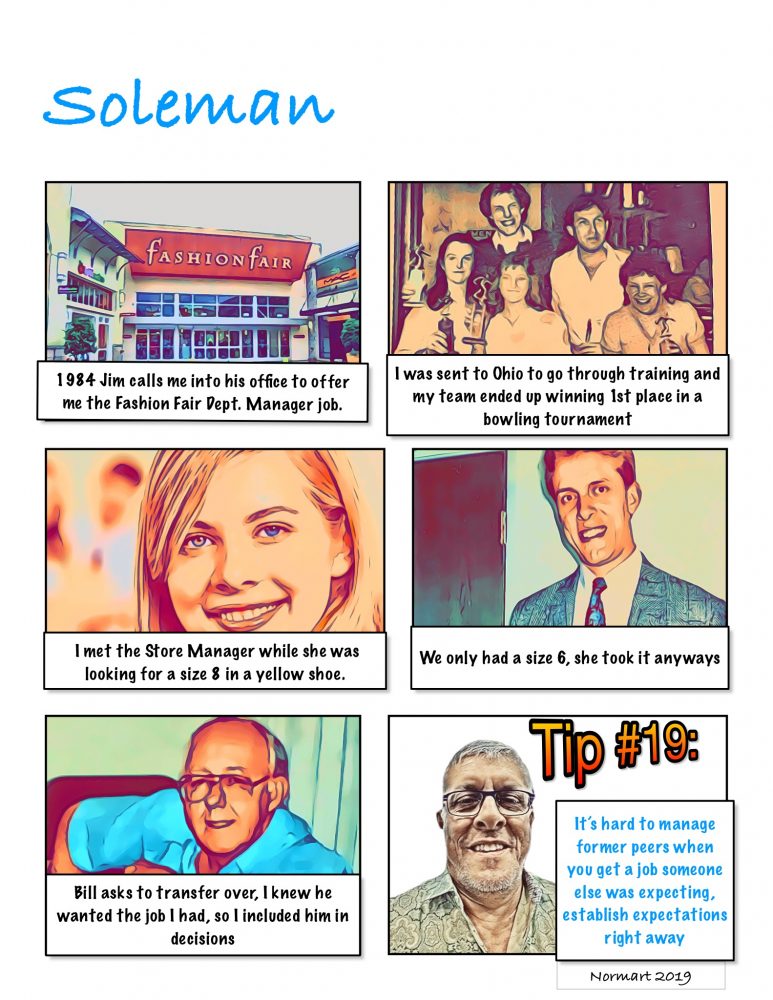 So, in Blog #18 I talked about waiting on people with disabilities. In this post I want to talk  about how to manage peers when you get a job over someone else that you work with.

It was 1984 and Jim calls me to his office and was abnormally happy. we are promoting you to the Department manager at Fashion Fair he said, the other department manager is moving to Ohio, so the job is yours if you want it. I accepted the job.

I had to attend a manager training course in Cincinnati which involved classroom time learning how to deal with problem employees and customers in the correct manner. We also had a bowling tournament with all the attendees from all over the country, I’m proud to say my team of four came in first place. The week flew by before you knew it and I was on my way back to my new home,  Rodders in the Fashion Fair mall.

My first day in the department I met my new store manager, she was an attractive lady in her 30’s and very well dressed. “ I have a dinner tonight and I need a yellow dress shoe she said”. She started going through the sale racks and found a style she liked. It was the only yellow dress shoe we had. “excuse me do you have this in an 8m?   “. I double checked in the back stockroom knowing it was the last pair, “I’m sorry it’s been half off for a while, we only have a size 6”  “I’ll take it” she said.  My jaw must have literally dropped to the floor in disbelief as she laughed at me and said “ don’t worry it’s only for a few hours” This inspired a saying I brought with me to every store I worked in from then on,

After a few months, Bill requested a transfer to my store. I knew he was expecting the job with all the experience he had, plus it was closer to where he lived. I first established my expectations for the team to start off with. This included selling, displays and customer service. Knowing Bill was a little disappointed and how we would usually have beers after work at a place near work called “Reubens”, I needed to figure out how to manage him. I tried to include him in some of my decisions to make him feel part of the success we would have. He did have a lot of experience, so I included him in the floor sets and often asked him for advice on handling employee issues. After a few months I could tell he was ok with everything.

Our store was doing great and I made sure that Bill & the team got credit too. Our store manager was really happy with our results and we would always have great visits when Jim came in for his monthly walk.

Bill told me one day he wanted to introduce me to his fiancée, Mary and her daughter Diane. I said “you aren’t trying to fix me up are you” he smiled and just said “see how it goes, she just broke up with someone”

So we went to have the beers and Mary was super sweet and Diane and I hit it off. We started dating frequently after that.  Little did I know I’d marry her a few years later…

Tip #19: it’s always awkward when you have to manage former peers. Its especially challenging when you have a friendship with them. Establishing your expectations for the team is the best way to start. This way, its clear you are in charge and if they decide to stray from your expectations that you laid out for everyone, then you can go from there. I like to have a team meeting first, then individual meetings shortly there after to make sure everyone is on board. I learned this method from the training program at Rodders and have also used it at Nordstrom and Zappos.