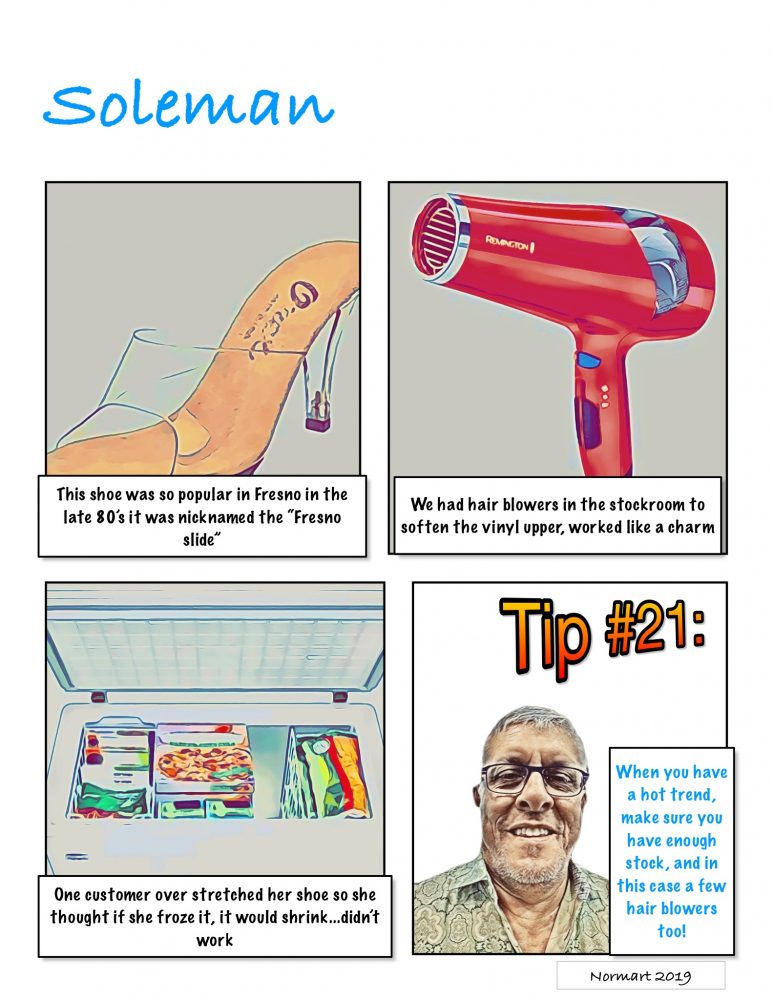 So, in Blog #20 I talked about keeping your comments off the floor. My flashback Blog 20 1/2 spoke to my love of fast cars which explains my tolerance to risk. In this post I want to talk about a trend that was huge and how we maximized it to its potential with an out of the box idea.

“The Fresno slide” was a couple of styles made by the brand Onex  that basically was a clear plastic dress slide with a clear heel. It had ample padding in the sock lining so it was super comfortable. The two styles we sold the most of were the “Venus”, a mid-heel & the “Crystal” the higher heel version.

The customers went wild over this style because it “went with everything”. We sold so many of these shoes the company nicknamed it ”The Fresno slide”. I called Jim and told him we needed to increase the reorder amounts as we had a hot seller here. I cant remember how many we were actually selling but it was quite a few. I calculated how many we were selling each week, how long it took to get reorders and figured out how big each of the re-orders should be to not miss sales.

The out of the box idea came from the rep. He told us to have hair blowers on hand and if you had a wider foot, simply put the hair blower over the clear plastic vamp for a few minutes and it would conform to the foot. It worked amazingly well. The look on the customers faces when we told them about the hair blower idea was priceless. Pretty soon there were many variations of the style as it was a huge trend, at least in Fresno.

One funny story was a woman came in complaining how the vamp split in half. I had never seen that happen before so I asked  her how it happened and she told me she used the hair blower trick and she did it too much, so the shoe became too wide. She thought if she put the shoe into the freezer it would “reverse” the process. Needless to say that didn’t work…gives a new meaning to “cold feet”.

When you have a hot trend make sure you have enough stock, and in this case a few hair blowers too…