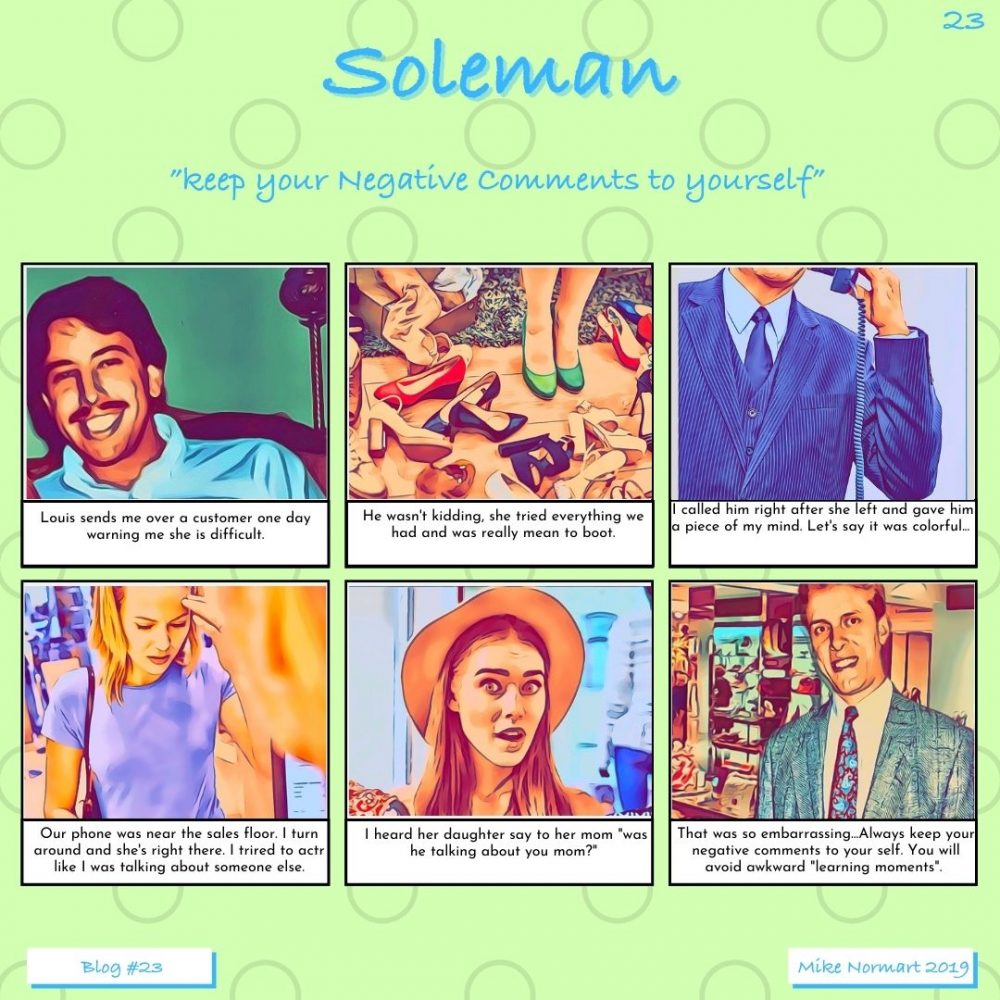 So, in Blog #22 I talked about the best way  to manage former peers. In this post I want to talk about why you should  Keep Negative Comments to Yourself.
Louis calls me one day and tells me he sent a customer my way. He warns me she is on the difficult side. I think he was being nice by the tone in his voice. I would soon find out what he was talking about…

The customer comes in and complains about everything under the sun. She says “no one ever has my size! I measure her foot and she’s a 9 1/2 S. Most stores don’t carry this size but we had several in stock so I go to the back and bring out a dozen boxes of shoes. I fit her in all the shoes and quite frankly some were great for her foot.
We had a shoe by Vaneli that was perfect for her. She then says “Louis from Manchester thought you may be able to help me since you have so much experience but I guess he was wrong.” So I try my best to help her out and bring out a few more.
She still complains about every little thing and eventually she leaves unhappy. So I call Louis from a phone near the floor and say “I know you were probably trying to help the lady out but she was a handful, just really mean and nasty. Warn me next time you do thatand don’t sugar coat it.”
Ok honestly there were a few expletives in there too. I hang up the phone, turn around and the lady is standing right there, she was behind me the whole time.

What to do now?

I felt like shrinking and I’m sure my face was three different shades of red but I play it off and act all cheery like the phone call never happened. Oh did you decide to try some others I suggested earlier? “No, I just wanted to write down the name of the brand you suggested that comes in slim widths” she said.
I said “let me get something to write on”, as I was going into the back,  I heard her daughter say “Mom, was he talking about you?”. Omg how do I get out of this? I thought to myself. Meanwhile, Joe one of the salespeople is literally on the floor laughing. His face is beat red and having a hard time breathing from laughter. I looked at him and said “as soon as I’m done with her I’m going to kill you” with a chuckle.
I never got a complaint about it but I’m sure I lost a customer for the store. It was wrong of me to say that in the first place and especially near the floor where anybody could hear me, let alone the person I was talking about. It doesn’t matter if it’s a customer, a peer or a vendor,

Keep Negative comments to yourself

Keep negative comments to yourself, you never know if someone will hear it. I have had this happen to me on several occasions in one way or the other. Never the same way twice! Even complaining to another salesperson can put them in a tailspin. Sometimes people have a bad day, look at it just like that.
Never ever say anything about a customer or anybody else when you are out on the floor. You never know who might hear you. This was one of the most embarrassing situations that ever happened to me. It taught me a lesson though I do not want to ever repeat.