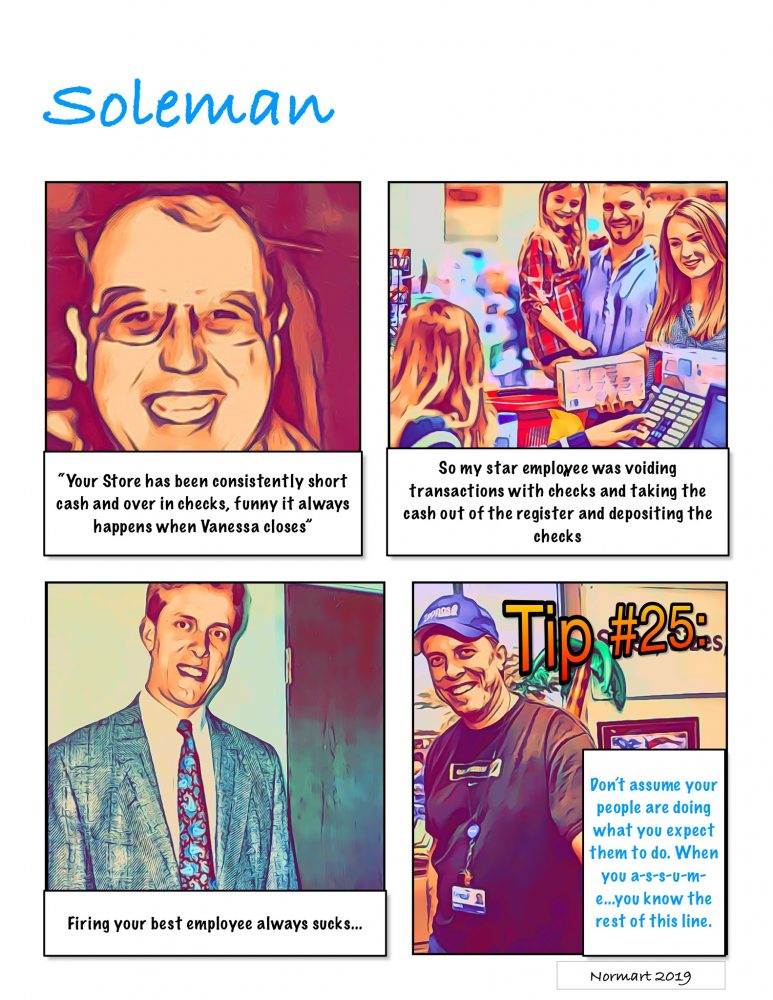 So, in Blog #24 I talked about keeping your options open if you aren’t happy in your current situation. In this blog I want to talk about what my dad suggested, not assuming your people are doing what they are supposed to be doing..

So Nordstrom was a bust, but I had an interview lined up with Jim from Naturalizer. The next day Homer calls me and tells me that loss prevention determined we were over in checks consistently and under in cash, usually when Vanessa would close by herself. So basically they thought should would wait on someone, if the customer paid by check, she would void the transaction, keep the check in the register and take the exact amount of the check out, so her register would balance. Hmmmm, my star employee? Omg, how disappointing.

So I have her close again as a test and the next day, I went through the register tape, line by line. Sure enough there was a void for a certain amount, it was a check transaction and she deposited a check for that same amount. Wow…I got her, but it hurt…

I called loss prevention to tell them what I found and they told me to terminate her. No charges would be filed but they wanted her gone. They put her last check in the mail and when she came in, I fired her. It was a tough one, I really liked her and I thought she was my “star employee”. Guess I assumed all that and yes like in the “Odd couple” series where felix goes to court to help Oscar he uses it as an example.

So Friday comes and it was a much needed day off but I also had to impress Jim from Naturalizer in the interview. I get to the store early and walked around the downtown area which was very nice. For some reason, I had major butterflies in my stomach. I had prepared a new resume, made sure I looked good with my best suit and favorite tie. I also went to the barber beforehand, so my hair looked good, but yet I was extremely nervous. I meet Jim and he was every bit as nice as he was on the phone. He was a jolly type of guy with a great sense of humor and warmth to him. This immediately relieved my stress, I felt like I knew him already.

He was an independent owner of three stores. he had locations in Los Altos,  Palo Alto and Richmond at the Hilltop Mall. He told me he would show me the ropes and take me to Las Vegas for the WSA shoe show. Seemed like a good deal so I accepted the position which also paid 5k more a year. I felt like I really wanted to work for this guy. It was a good feeling.

The next day I gave my notice to Homer which he was disappointed to see me go. He was a good guy and I told him that. I just felt the future seemed better with Jim.

Never assume your people are doing what they are supposed to be doing or they will make you look bad.