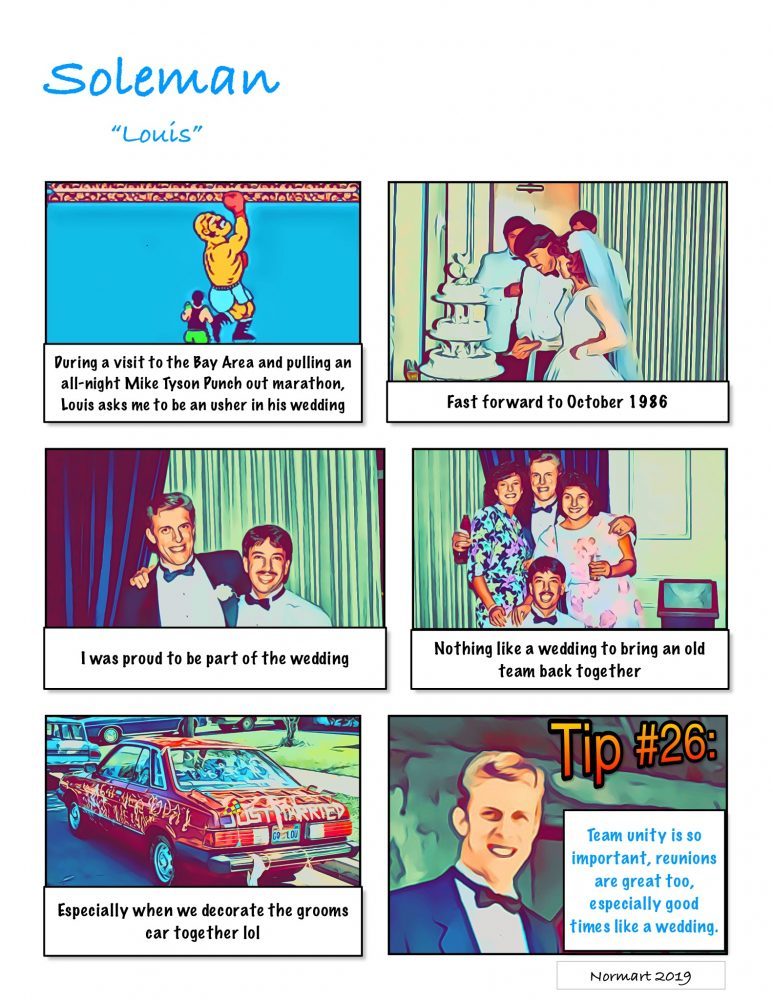 So, in Blog #25 I talked about what happens when you assume employees are doing what you expect. In this blog I want to talk about another dear friend of mine and the importance of team- Together Everyone Achieves More.

The Bay Area was my home now. Louis came up one week pretty close to a year out from his wedding . It was like old times. Since Rodders closing, Louis was focusing on his fireworks business and it was starting to take off. I think we stayed up all night playing video games, catching up with each other and drinking lots of beer. He asked me to be an usher in his wedding in between Mike Tyson’s Punch Out and Super Mario Brothers.

I vaguely remember Diane getting up in the morning for work and we were still up playing in our boxers.

Okay that might be embellished a little but it makes for a good story. It was a great honor as I really liked him and his fiancée Tracey.

Oct. 4, 1986, Louis and Tracey’s wedding day and there’s nothing like bringing a group of friends and Co-workers together like an occasion such as this. Louis & Tracey’s  wedding was a great time for all.

Tracey was beautiful in her wedding dress and the groom was very handsome in his black and white tuxedo. I was fortunate to be one of Louis’s ushers so I sat everyone in their correct areas. It was a great way to meet everyone before the wedding and reception.

It was a beautiful ceremony and since Donna and Sharon were there as well, we made sure the grooms car was appropriately decorated. Talk about a team reunion/bonding event. We had so much fun “decorating” his car and we were laughing the entire time.

Louis and Tracey were nice during the cutting of the cake, no over zealous feeding by either. I don’t think Tracey would have any part of a cake food fight.

It was a great team bonding event for the old team and Louis and Tracey looked so happy on this day.

One of the best times I’ve had in a long time.

Building a strong team and having them bond is so important. It’s especially rewarding to see everyone have such a good time when one of the team gets married.