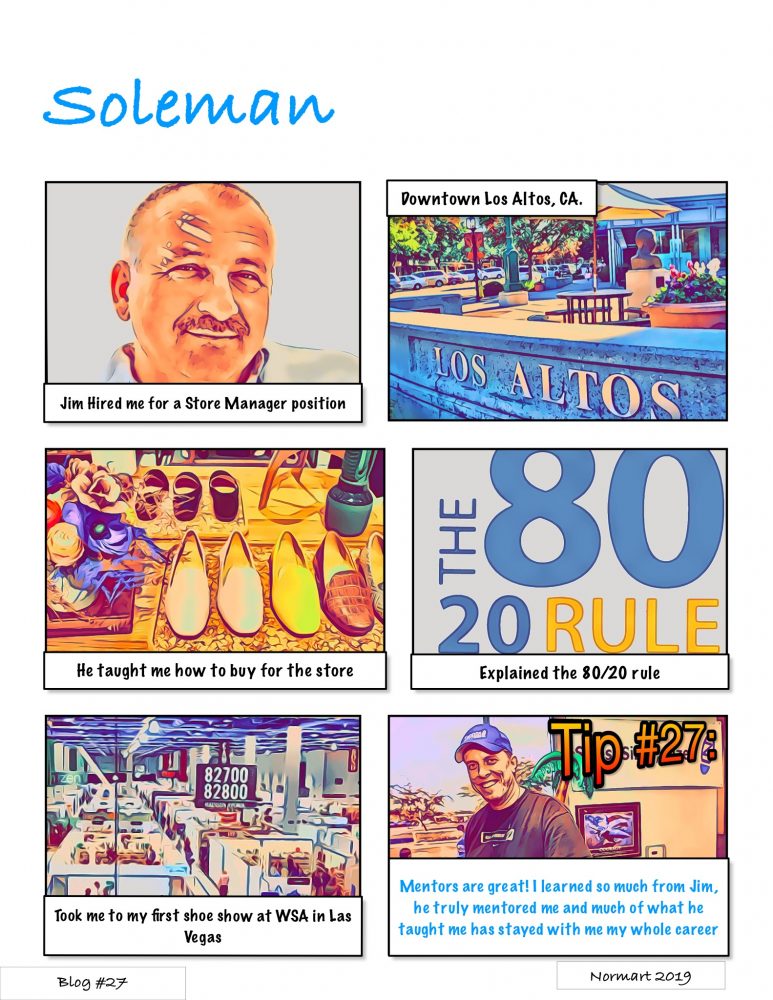 Like i said in Blog #25 Jim offered me the job when he interviewed me. It was more money than what Cincinnati Shoe Company paid me and the store was located in Downtown Los Altos. It was a sleepy little downtown area with a lot of charm. It had the best deli for sandwiches and a great upper end restaurant just a few doors down.

I had three employees who had been there for awhile. Beverly who was in her sixties and her ex-husband used to own the previous shoe store where Naturalizer now was. The store was called Marc Roberts and was catered towards men as they served beer and shot pool in the store. Bev was an attractive lady with a very easy going personality. I instantly liked her.

Nancy was a tough lady with a heart of gold. She had a big heart but liked to come off like she didn’t take any shit off people. She often talked about her dog who was named Dog but pronounced D-O-G. Didn’t figure that out for awhile but chuckled to myself when i finally did.

Doreen was a lady that was well to do a probably didn’t need to work. Actually i don’t think any of them really did. She had a warm personality and was easy to talk to.

Nancy and Doreen would often open the store and liked to sit in the back and smoke and BS until a customer came in. I liked to to do the stock work and window displays. Bev was more part time but i always enjoyed the days she came in to work. I loved the team, they were all really nice people.

Jim explained to me that when you are an independent owner you really have to watch your cash flow as it’s your money you are dealing with and not some big corporation. I didn’t really understand the scope of that until we had a huge shoe called the Royal hit the inventory. I’ll explain more about the Royal in Blog #29. He showed me how he did the sales plan for the store and how to work the open to buy.

Basically you have a beginning month inventory. You add receipts, returns and subtract your sales and markdowns. You have a planned inventory and if your sub total  is under you have money to spend. If it’s over you are over bought.

Jim also explained the 80/20 rule. Basically he said 80% of your sales comes from 20% of your styles. Key was to identify those styles and make sure you had stock in those items. So our rep was going to show us the new collection soon, so Jim was going to walk me through how to buy. But first we were going to the WSA shoe show in Las Vegas.

We got off the plane and it was like having a hair blower in your face. It was 120 degrees there in August. Growing up in Fresno I was used to the heat but this seemed different for some reason. We walked the entire show so we could get a sense of what the fashion trends were. There were more brands than I could even imagine. Every brand had their own booth set up, some were small and others quite large. We met Greg at the Naturalizer booth and he told us he would come in next week to go through all the styles once he got a sense of direction from the show.

Jim took us to see Glen Campbell later that night at a casino, he was amazing. Country really wasn’t my thing but I remembered him from True Grit. Truly enjoyed listening to him.

Later the next week, Greg came in the Palo Alto store and thoughtfully laid out the styles by category. He would give us a pitch for each style. When he was done Jim would ask him what the A styles were, B styles and finally C styles.

An A style is a top seller, you had to get to it no matter what unless there were two similar A styles. B styles are the next group so you buy those lighter. C styles are the last group. You get to them if you can but usually they are small runs used for window dressing.

Jim would then ask what the top 5 styles were and best colors. He then would tell me that certain styles do better in Los Altos than the Hilltop location so we bought differently for each of his locations. He used the term “woofer” which meant a dog or poor seller. I wanted to stay away from those. It was fascinating to go through this thought process with him for the first time.

The following day I was writing the PO’s and making sure we stayed within our OTB. I laid out all the pictures of the styles we picked by delivery and decided how many pairs to place. The styles with extended sizing were the most challenging to write, especially if I was going to stay within my budget. I later presented my final buy to Jim and he made a few suggestions and we were done.

learn from your mentor. Jim was great as he made sure I learned all the basics first.

One thought on “Blog #27 – Learning from a Mentor”