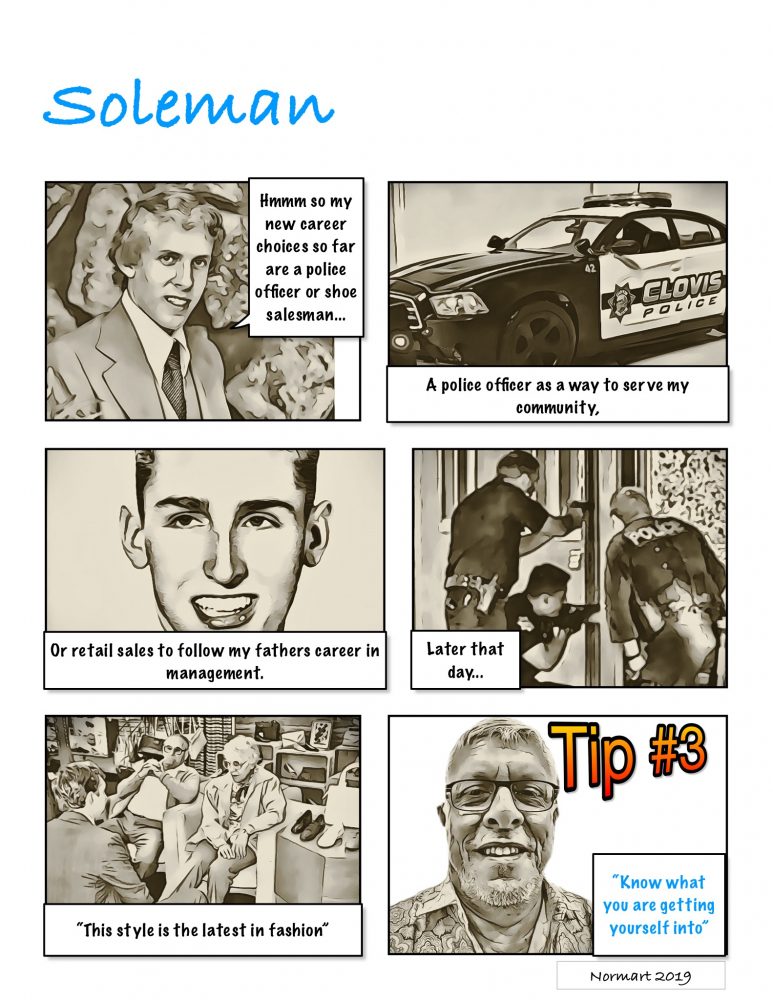 So, as I shared in Blog #2,  my Career choices were narrowed down to a police officer and a shoe salesman.

First, let’s take the Police Officer route.  It started with a physical agility test . Since I was athletic in high school, this should be a no brainer. I walked beams, climbed over walls, carried a hundred lb sack, and all those things people train for in the army.  It was awesome! So, awesome I aced the test, and got 2nd out of 50 applicants!

Then, there was the written test. But, wait! I started to listen to my gut. “hmmm…people can die doing this job. I’m not really feeling this”.

Ok..next, let’s take the shoe salesman route. Like I had said in blog 2, my mom told me about this shoe job to apply for that she couldn’t get because of her age ( this was not a “women’s rights”  time period).  So, I decided to apply at that shoe store and was waiting for a response. My father worked at Sears for his entire career;   first as a department manager, and then as a store manager of the Sears Catalog Store, the Amazon of its time. These were actual CATALOG stores, not online stores.  I always looked up to him as a retail professional. So, I was naturally leaning towards this route, because I saw him in action growing up. I liked what he did.

A very nice, bearded man who was the District manager at Koby’s shoe store, hired me. He must have thought I was a nice kid, and seemed eager to learn. So, I got my 1st shoe sales job!

By the way, times have changed. Kobys was later bought out by Payless, which was bought out by Wolverine World Wide. (I’m dating myself considerably in this blog).

So here’s Tip #3; When deciding on a career Do your research first. Sometimes we don’t know why we feel a certain way, but it’s best to trust your gut. Last blog I said Listen to your gut. Now, in this blog, I’m saying Trust your gut. Then do your Research; I mean all aspects. At the time, for me, Retail was the way to go.