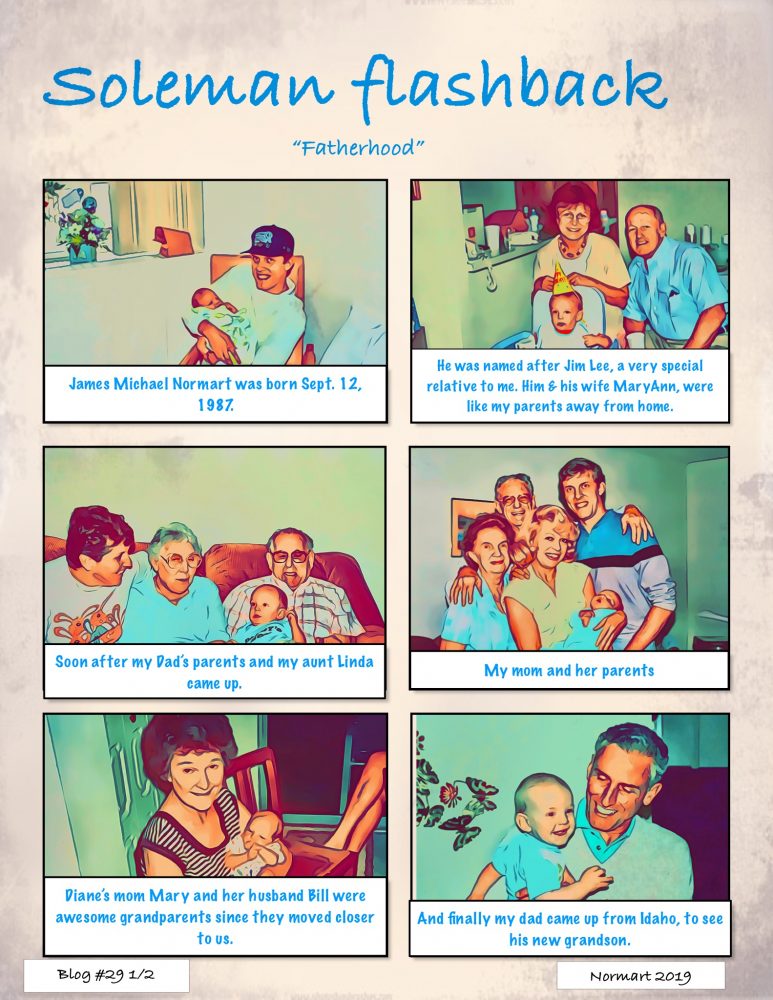 So, in Blog #29,  I talked about working for an independent owner. In this blog I want to talk about being a first time father.

Fast forward to Sept. 11, 1987. We had taken the birthing classes to be prepared for James’s arrival. It was fun meeting other couples. I remember running into Ray Wersching, the kicker for the 49ers, in the elevator. His legs were huge! lol. We talked like we were buddies, he’s a super nice guy.

Around midnight, Diane said “Mike, it’s time!” we got all her things in the car and raced to the Redwood City hospital. It my hurry to get over there I ran over a cat. I looked at her and she said “don’t even think about stopping!”.

We got to the hospital and 22 hours later, September 12, James Michael Normart was born. He was 22” long  and 10lbs 5 oz of boy.  I was there every step of the way. Feeding ice chips and trying to calm her as much as possible.

The doctor finally pulled him all the way out and I cut the umbilical cord. It had the texture of a plastic tubing. A wave of emotions struck me at that moment and I was a mess. Tears rolling down my cheeks and this strong love for a being I just met. It was incredible!

We named our son after James Lee who is a very special relative to us. When we moved to the Bay Area, Jim and his wife Maryann always made sure we were ok. Maryann is my dads 1st cousin.

My Grandma Si and Grandpa Bill came with my Aunt Linda shortly after James was born. We had such a great time and it was especially neat to see my grandfather get such a kick out of his new great grandson. We had some great Armenian food my Aunt and grandmother made which I really missed.

My Mom and her parents came out after that. My mom isn’t much of a traveler, so I’m glad my grandpa brought her out to see James. It was good catching up with my Grandparents too, I really missed my “Garage talks” with grandpa.

Finally my dad came up. With my dad living in Idaho, I’d maybe see him once a year, but we talked a lot on the phone, as he still mentored me about retail stuff. We played a few sets of tennis and generally had a good time.

Diane’s Mom and her husband Bill moved to Walnut creek which was really close to where we lived. Mary and Bill were a great help to us with James. They would come over frequently and Bill and I would Bbq and swap retail stories as he was still in the shoe business.

Being a father has been the joy of my life, I was especially lucky to have another child in 1992 but you’ll have to wait for that blog…

Oh yeah, and if your wife is in labor and you run over a cat on the way to the hospital, don’t even think about stopping…