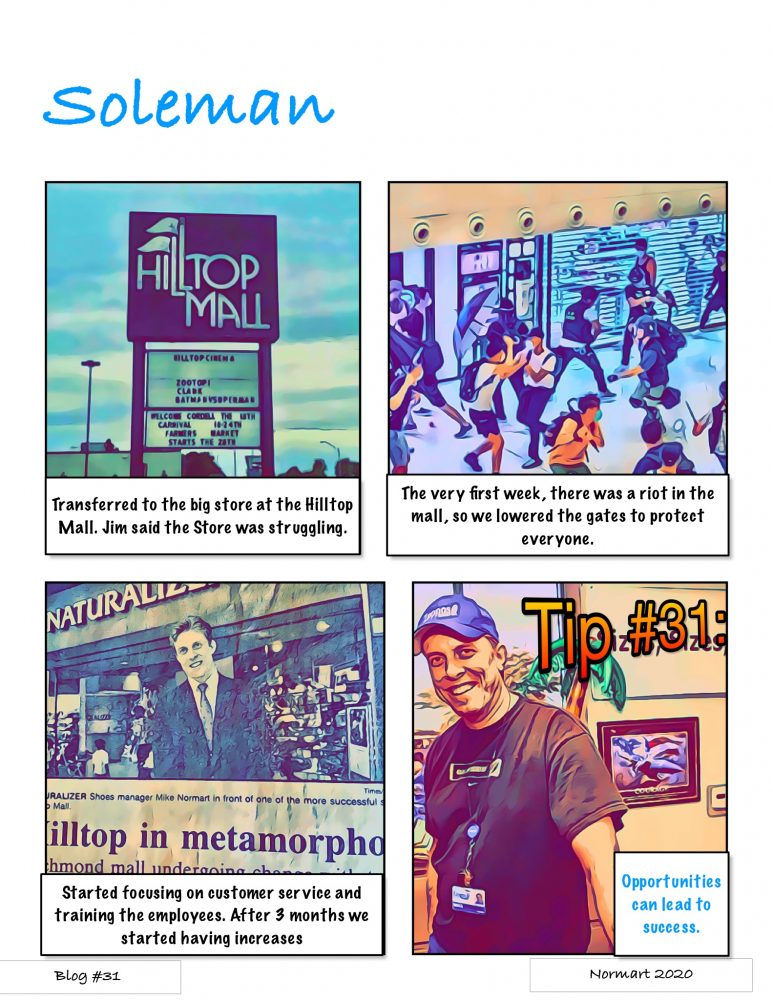 So, in Blog #30 I talked about managing seasoned employees. In this blog I want to talk about how opportunities can lead to success.

Jim fills me in on the Hilltop store. It’s our largest volume store but losing business yoy. I figure it’s probably training. I get to the store and Roberta or “Bobbie” as she liked to be called greeted me. She was a lady in her sixties and nicely dressed. You could tell she cared about the store so I thought to myself “so far so good”. She was great with the customers and knew her stuff.

Tom comes in around 12 for the closing shift. He was very rough around the edges and unkept in his appearance. Just listening to him I was thinking “this is going to take some work”. He also drives a cab, so he always looks tired.

The next day I meet Julie and Sharon who was supposed to close, calls in sick. “Guess I’m closing”  I tell Julie. She tells me Sharon calls in sick a lot…well that’s going to change, I say to myself.

I decide to run an ad in the Richmond Times. The next Day I  set up four interviews for the following week. We get through the weekend and of course Sharon calls out sick both days. Every time she does this I end up working a twelve hour day, so she’s gone as soon as I hire the next person.

I open the store and interview a very nice lady named Dorothy, she was confident, dressed very nice and flexible in her hours. Definitely top candidate so far. She had shoe experience which was a definite plus.

A couple of hours go by and I hear a loud commotion outside the store. There were about twenty young kids fist fighting in the mall. It was getting out of hand to where they were destroying some of the other stores displays and fixtures. Security was running over so I decided to close the store gates to protect employees and customers. I told everyone to just stay in the store until security sorted it all out. Security told me later that they were two rival high schools kids.

Tom comes in later that night drunk, so I send him home and work his shift. The next day I  let him go. He calls me back a few hours later to tell me he wasn’t that drunk…sorry buddy not acceptable. I call Dorothy later and hire her.

So I continue to interview people and at the same time focus on the service level. The sales in the store started to improve. We were mentioned in the newspaper as one of the more successful stores in the mall, I guess we are doing something right.

When there are a lot of opportunities it can be a bit overwhelming at first but putting together a priority list and knocking them out one by one can result in big improvements for the store and morale. Sometimes you have to make hard choices to remove bad habits or bad employees.