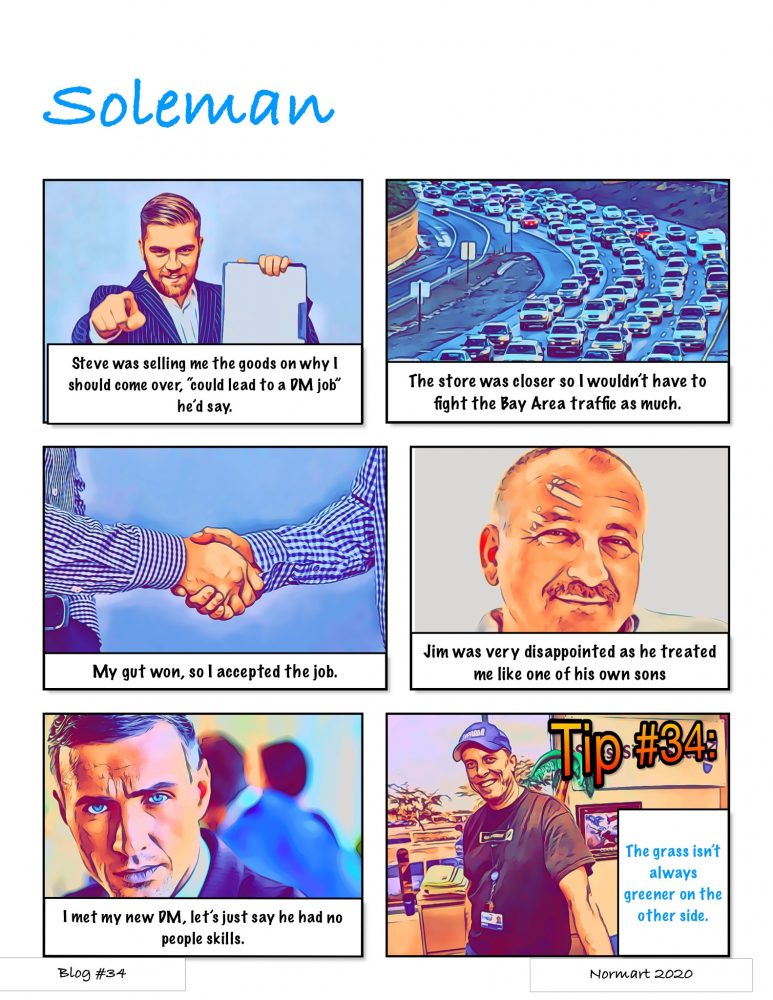 For Blog #33 I talked about how you have to follow your gut instead of your heart.

Steve was pushing me to make a decision. “This could lead to a District Manager job” he said. He only offered me 5k more but the thought of possibly moving into a DM job was enticing. Jim had three stores so upward movement was limited.

I started writing down the Pros and Cons:

Decided to take the offer. Now I had to tell Jim which was going to be tough. I decided to go to lunch with him. He was really disappointed…

Jim treated me like one of his own sons. He told me he thought I’d take over one day.  “I don’t know what this guy is telling you but the grass isn’t always greener on the other side” he said. That made my heart sank. “You don’t know these people, you know me”.

Wow, tougher than I thought but had to stay strong. Even to this day I feel bad I disappointed him so much. He was like my work Dad and a great mentor.

I gave my notice and said my goodbyes to the team and others in the Los Altos store. I was supposed to meet Frank at my new store. We meet and he immediately grabs a yellow pad and tells me to take notes. I’m following him around the store and he basically wants me to write down a to do list on everything that needs to be improved. He said he’d come back the following week to see how far I got.

After Frank leaves, I start checking the sizes in the wall and the selling of each item. We were missing a lot of sizes and especially in the widths they were known for. I put in some reorders and fax them for approval.

Denied…by Steve. So I called him. “How come the reorders were denied?” I asked. “We are going a different direction” he said. “Aren’t we known for having extended sizing?” He said that the extended sizes would lead to mark downs. Hmmmm. Changing the customer base could be disastrous I thought to myself.

Frank comes in and starts in on me. “How come you tried to order the wides?” He said.  Uhhh because we are selling them…first of all, his demeanor was very condescending. I knew after two experiences with this guy I made a huge mistake…

Unfortunately for me Jim was right again…

There is something to the old saying “The grass isn’t always greener on the other side” , its greener where you water it. Be conscious of this when making career changes. sometimes the grass is dead…