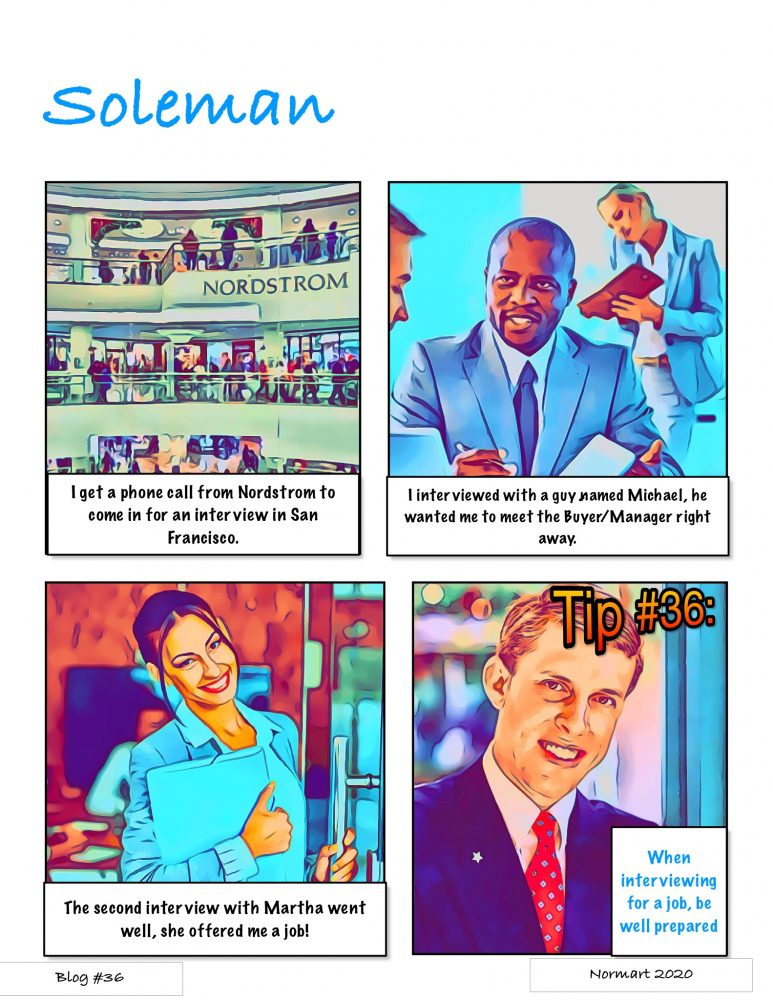 So, in Blog #35 I talked about when to jump ship if it’s sinking

First thing is to make sure you can sell yourself and give a great first impression.

I went to the San Francisco Nordstrom store to check out the salespeople. I noticed a lot of the men wore navy blazers and grey or khaki slacks.  A nice paisley tie would also do the trick. So I found a blazer and some grey slacks and bought a red “power” tie.

Next get a business type haircut and manicure. Next stop Barnes and Noble. Found three books:

“What Color is your Parachute”

The year was an earlier version of the parachute book of course and the next two books are just examples of what I bought, but along the same lines. How to prepare, What kind of questions to be ready for and how to answer them.:

Next was to learn as much about Nordstrom as I possibly could. I did a lot of research about how In 1887, John W. Nordstrom immigrated to the United States at the age of 16. He was born in Sweden. His name at birth was Johan Nordström, which he later anglicized to John Nordstrom. After landing in New York, he first began working in Michigan and was able to save enough money to purchase a 20-acre potato farm in Arlington, Washington. In 1897, he joined the Klondike Gold Rush in Canada’s Yukon Territory. After two years of prospecting, he finally struck gold, but sold his disputed claim for $13,000.Returning to Seattle with his newfound wealth, he married Hilda Carlson and looked for a business venture, finally settling on a shoe store that opened in 1901, called Wallin & Nordstrom. Carl F. Wallin, the co-founder of the store, was the owner of the adjacent shoe repair shop.John and Hilda had five children, three of whom would follow him into the family business, Everett W. (1903), Elmer J. (1904) and Lloyd N. Nordstrom.

In 1928, John W. Nordstrom retired and sold his shares to two of his sons, Everett and Elmer. In 1929, Wallin also retired and sold his shares to them. The 1930 grand opening of the remodeled Second Avenue store marked the change of name to Nordstrom’s. Lloyd Nordstrom subsequently joined the company in 1933, and the three brothers ran the business together for almost forty years.

By 1958, Nordstrom’s had expanded to eight stores in two states but still sold only shoes. Their expansion was based on customer service, deep product offerings and full size ranges. Apparel came with its purchase of Best Apparel of Seattle in 1963, and the company’s name was changed to Nordstrom Best.

I felt I was ready…

I meet Michael armed with a resume and a smile and a lot of info on Nordstrom. His first question was text book:

Why should we hire you?

What are your biggest strengths? weaknesses?

I tried to weave in answers that were relevant to the job I was applying for too. The interview went really well, I could tell Michael liked me and he wanted me to meet Martha who was the buyer so he went to get her. She was in a meeting but would be free shortly.

I had a really good interview with Martha as well fielding similar questions and asking questions about the “tire story”.

She then asked me about my goals and I said I’d like to eventually be a buyer like her. She left the room for a moment then came back and said before they could offer me a position they had to do a background check. She would get back to me in a few days.

Did I just land a job at Nordstrom?