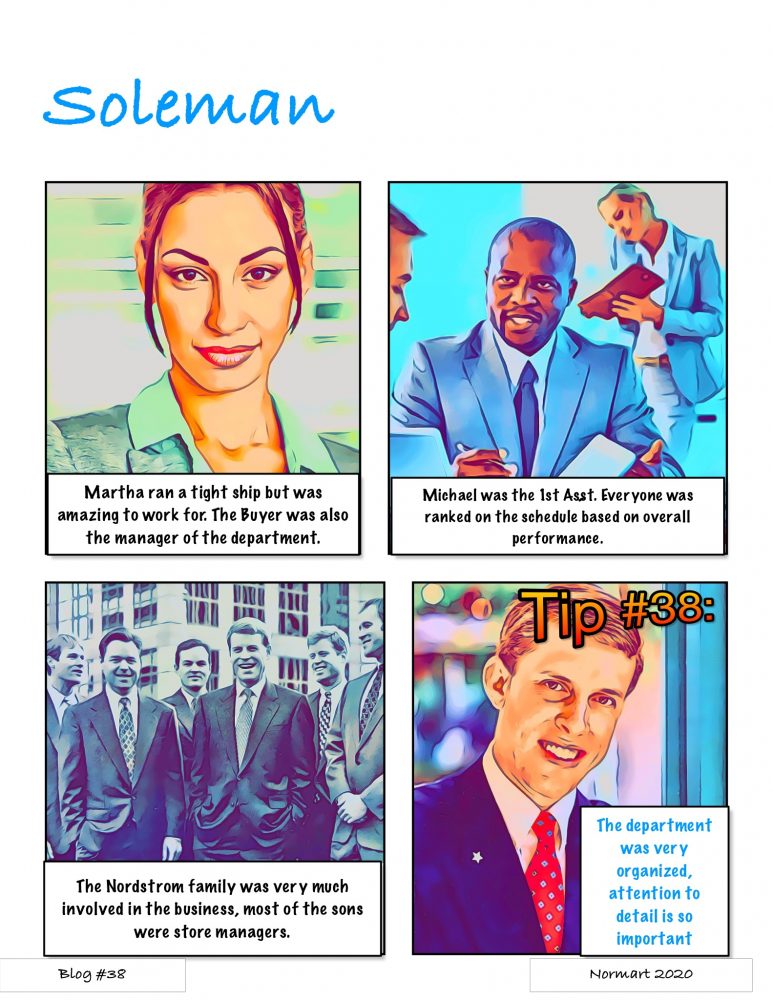 So, in Blog #37 I talked about how customer service at Nordstrom is number one. In this blog I want to talk about the importance of a well run department.

Martha was an amazing person. So far in my blogs you have heard me talk about good managers and great mentors. You have also heard me tell of the not so great people. Martha was in a class beyond all this. She was the first person who carried herself so well you were just in awe of her. She was confident, knowledgeable, organized and had a very high sophistication to her. At the same time she was funny and thoughtful. I was thinking this woman is amazing! She had very high expectations for everyone and everyone respected her. I mean Everyone .

At Nordstrom the Buyers were also the department manager. They would also have a 1st Asst. and a 2nd Asst. In the larger stores even a 3rd Asst. Michael was the 1st Asst. And the 2nd Asst. Position was open.

The store would open and Michael or Martha would watch the floor and start the list. It was determined by who showed up first. When you were on the list it gave you time to do stock work or call personal customers. If you missed a sale you could also try to find a shoe for someone by calling around the stores to find it. We didn’t have a computer system then so it was very manual.

There were several of the Nordstrom boys running stores. Blake Nordstrom managed Hillsdale and Jim A Nordstrom was supposed to open the Arden Fair Mall in Sacramento later in the year. They all had to start from the ground up and work their way into it, so they would know the business. I respected that.

Tip 38: The importance of a well run department

Martha was very organized and had very high expectations of her team. Yet she was warm and approachable. Everyone wanted to do well because of it. I had a very high respect of her and still do to this day. It layed a foundation for me on the importance of running an organized business. There were routines that were meaningful and so important. from the displays being done in the morning to straightening your section before you left. Everything had a purpose.