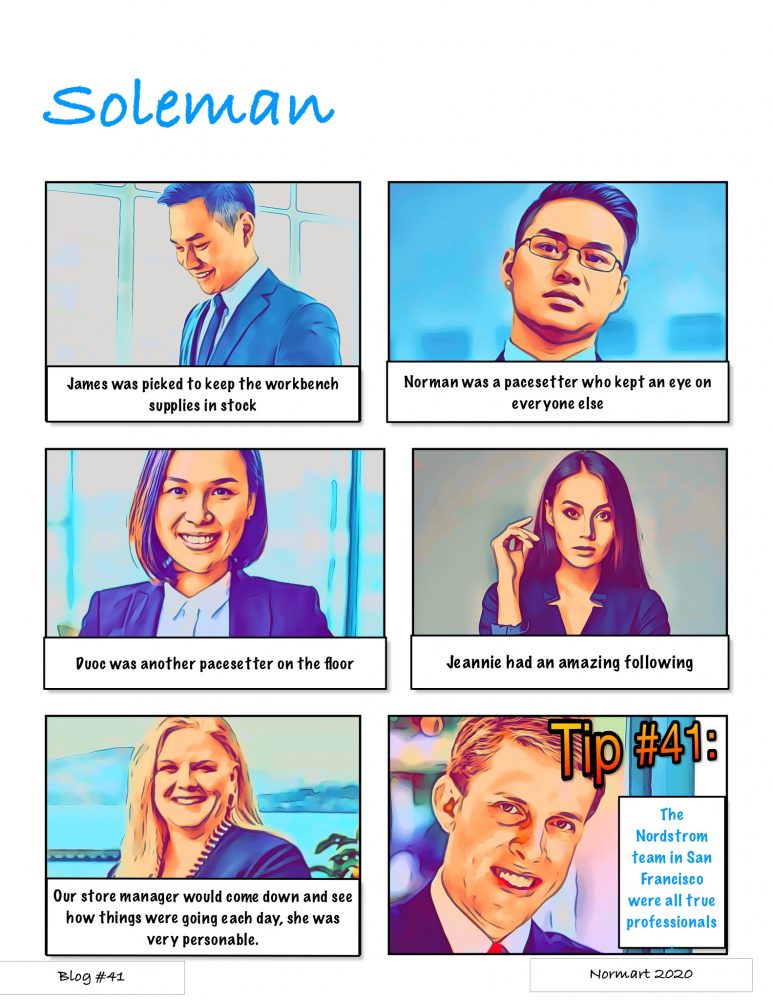 In Blog #40 I  talked about my first visit with upper management.

In this blog I want to talk about the professional salespeople Martha had on the floor.

As I said in Blog #39 Martha assigned the work bench to a guy named James. He made sure all the items were stocked at all times. We had foam pads, cork fillers, polish, heel slip pads, stretchers, bunion tools, vamp raisers and much more.

James made sure we had everything we needed and would call out people that were wasteful. Aside from that James was a true professional. He was always impeccably dressed. He was courteous and thoughtful. We had amazing conversations and asked me a lot of questions about my footwear career to get to know me better. The workbench was a fine tuned machine, he never skipped a beat. He was a great listener to fellow employees and the customers. I really like James and respected him too.

Norman was a pacesetter. He had a very big personality and was into everyone’s business at least on the sales side. He knew what everyone was selling and how they were doing it. If he didn’t like something he would either call the person out or go to Michael. He didn’t care who it was either. There was a rule if a personal customer asked for you, it didn’t matter if you were on the list you would be called out of course. Norman would question wether it was a “real” personal customer. I steered clear of him but also admired how good of a salesperson he was.

Duoc was another pacesetter employee. She was very sure of herself and was great with the customers. She was very knowledgeable about product which helped her sell so well. She was always nice to me and we had great conversations about life in general. She didn’t get into others business so much, just did her thing

Jeannie was on another level than everyone else. She was very professionally dressed. Actually impeccably dressed. She was soft spoken but everything she said was thoughtful and deliberate. She was also very knowledgeable about product and had an amazing following. She was rarely on the list as she always had people asking for her. Whenever Martha needed some business to make the day, she’d ask everyone to call personal customers and Jeannie always delivered. She was something to watch. She was always pleasant too, unless Norman got under her skin, then it was on. She was always nice to me and I enjoyed learning from her.

Vicki was the Store Manager. She had a presence about her. Strong, confident and very pleasant. She always knew the right thing to say. When she walked by the aisle though, you better be on your  -A- game, she liked everything to be perfect. I grew to like her over the years and ended up have a pretty good relationship with her. I admired her on how she could demand respect by her presence but also offer a caring sense to her as well. She was great to work with and I was lucky to have her as the First Nordstrom Store Manager to work for. She was awarded in 1994 the John W Nordstrom award for excellence and  became the Northern California Regional Manager in 1995.

Martha was successful because she knew the importance to having a professional team. I’ve talked about this before and its so important. People make the difference!