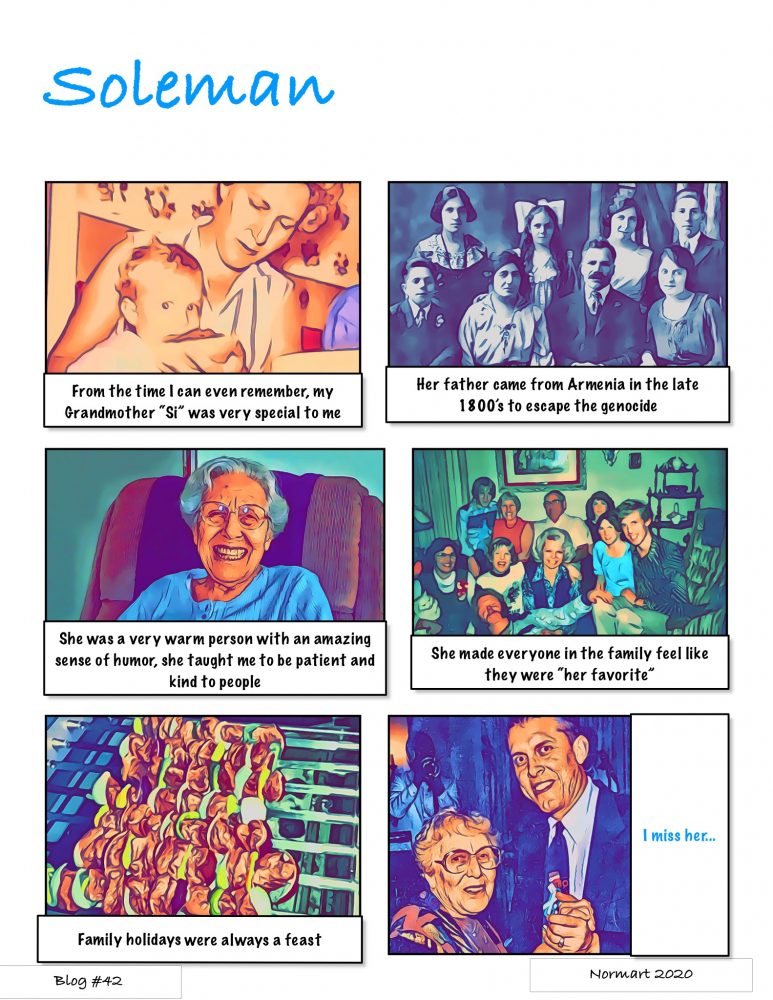 In Blog #41 I talked about how professional the salespeople were, in this blog I want to talk about one of the most important people in my life, my grandmother Si.

Wow! where do I begin? The reason why I’m writing about this wonderful and beautiful human being in my shoe blog, is because she taught me so many things. So let’s start from the beginning. As a young little guy I spent many special moments with my Grandmother “Si”. There were many times she would watch me when my father was at work and my mom had errands to run. She would always treat her grand kids with a loving warmth and kind spirit. She was really great at explaining things as you went along too.

I’ve talked about my Grandmother before in Blog 15 1/2 as an influencer. She shared a rich history with us about our genealogy.

Her family’s name was Avakian. in the late 1800’s, her father was a young  freedom fighter in the hills of Harpoot, Armenia. There were atrocities that were happening before the actual Armenian Genocide. He was captured and scheduled to be executed the next morning but a guard felt sorry for him and let him escape.

Peter Avakian came to settle in Worchester, Massachusetts. He worked in a leather shop by day and took english lessons at night to be able to communicate to his boss. He earned enough money to send for  his brother to come over too. His parents were later killed in the massacre. He later settled in Fresno, California. My Grandfathers Great Grandfather Mardiros Yanikian came to America in 1871 from Erzeroum. They started thier journey in July by horseback and ended up in Liverpool in August. They took a vessel called the “Wisconsin” and Arrived in New York, Sept. 11, 1871. He felt like a “Normart” which is Armenian for “New Man”. Thus the name was changed to Normart. He was the ‘first” Armenian to come to Fresno, California but went back to Philadelphia to bring his family back with him.

She was born Servart “Si” Avakian  Jan 4th, 1914. Her parents house burned down and the birth certificates were lost. Her father thought she was born January 15th so she celebrated two birthdays which she loved. She married my Grandpa Bill Normart November 9, 1935. They enjoyed their entire lives together.

My Grandmother had a very positive and warm spirit about her. I don’t remember too many times when I actually saw her “mad” about something. She always had a tone in her voice which resembled something short of a musical. She was very patient with her grand kids, three boys from my parents and two girls from her daughter Linda and my uncle Joe. I’ll just say this, the boys were a handful. They had a cabin in Huntington Lake and we would often spend a week or so up there with them and sometimes without my parents.

Grandma was the warm and fuzzy whereas Grandpa was the one that set the law down. Not that he was mean, in fact he was a teddy bear but his voice was so gruff he could scare you by just raising his voice a little. His hands were so big that was scary enough and the funny thing was he was a machinist which involved very intricate hand work. he was an amazing person as well.

My brothers and I,  would spend countless hours exploring the woods of the lake and we would come home just about when it got dark. We were afraid “the bear” would get us, so we made sure we were home in time. There was a bear we saw from time to time that would come out at night and get into the trash cans for food. Saw him a few times so I know he was”real”.

Grandma always had amazing Armenian dishes to serve and grandpa would do the BBQ. (maybe its in our blood with the grill thing.) She would make the best rice pilaf and stuffed grape leaves or Dolma. There were countless other Armenian dishes we enjoyed but those were my favorite. I have a video of her making them and every so often I’ll play it and get teary eyed every time. The evening would usually end with some cards or us boys reading our comic books we would bring up with us.

We would usually end up fishing at the lake or in my Grandpas boat. He was really great at baiting our hooks with his big old hands and we had the times of our lives. We would usually catch a few and he would show me how to properly clean a fish later. I remember the spray of the water as my Grandfather would speed us home. Those were priceless moments…

As I said earlier, My grandma had 5 grand kids. I didn’t know until she passed that I wasn’t the “favorite”. Thats because we “all thought” we were. Not sure who “was” the favorite but it doesn’t really matter.  She had a way of making you feel that special. I remember as a young boy of about 13 years old riding my bike 2-3 miles to go see her. We would have such a great time together. Sometimes I’d just follow her around watching her make gooseberry jelly or something in the kitchen. she was always busy doing something.

She came to my High School graduation filming me with her 8mm video camera. That scene of her doing that still appears in my dreams sometimes. My parents got divorced shortly after that and it was a very tough time for our families. It literally tore the family in half. My grandmother never trashed my mom however she was very sad the whole thing happened.

When I moved away from Fresno in 1982, Grandma would make it a point to call me every Sunday around 10am. She would sing “M-i-c-h-a-e-l”. We would talk about an hour every Sunday to the time she passed at the age of 95

She taught me the box step one time when we were at the cabin. It was just the two of us and she played either Sinatra or Streisand, I can’t remember which one. Fast forward many years later at my cousins wedding, I asked her to dance. I did the step she taught me, as slower is better for me lol. She said “Michael, how did you learn to dance so well?”. You taught me grandma, in fact you taught me many things about life. To treat people with kindness, to enjoy life to the fullest and to enjoy family.