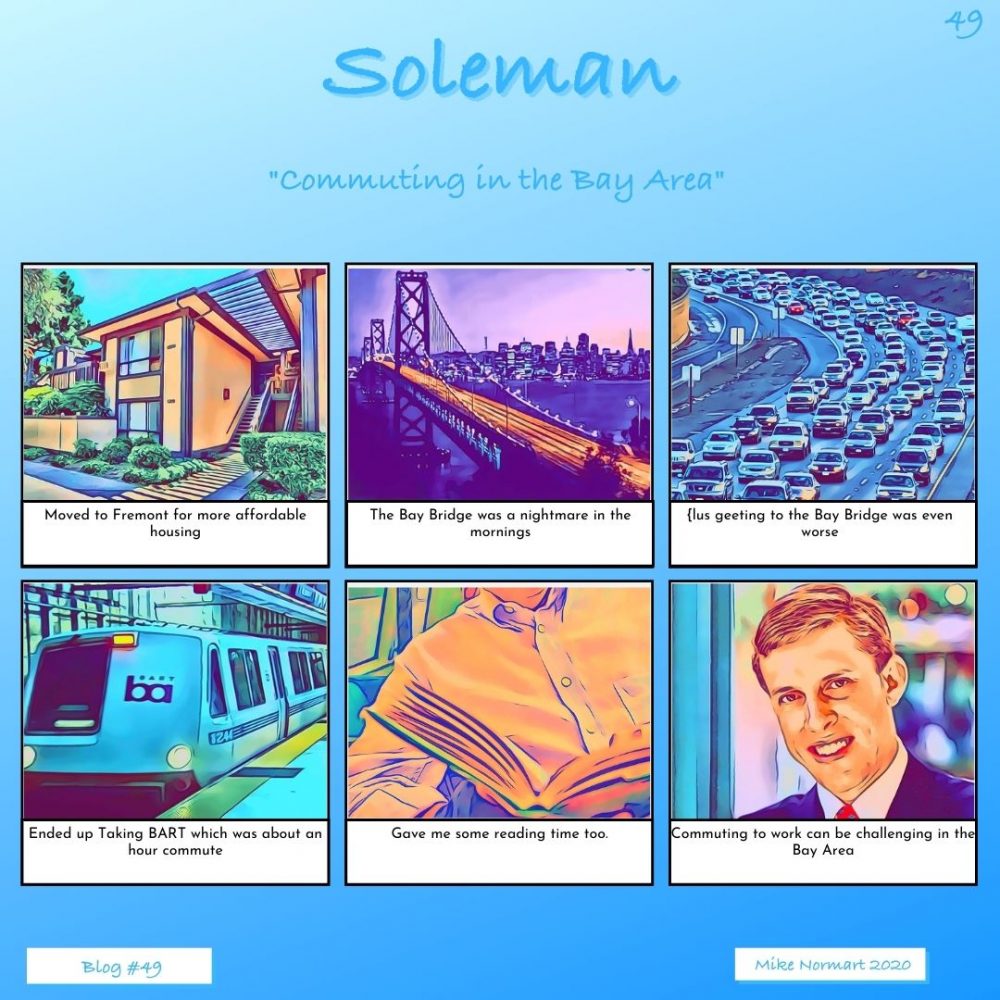 Blog #48 I talked about how Life Mentors are Important too. in this blog I want to talk about commuting in the Bay Area.

Rent on the East-bay was 100-200 less expensive a month for a two bedroom apartment. We found a nice place in the center of Fremont. It was pretty close to the BART station too. I had been paying monthly parking when we lived in Foster city. One late night, they closed the parking garage before I got there, so I had to take Bart home and got a taste for what BART was like.

So another reason to move to Fremont was the fact that BART (Bay Area Rapid Transit)was there which would be an easier option to get into the city. To get into the city in the morning by car was a nightmare, plus you had to pay high parking rates. On the East- bay side if you drove you also had Bridge tolls to pay.

BART Took about an hour to get to work and there was a stop right near work. It was about 5 bucks a day vs $5 to go over the bridge then another $30 to park. With all the traffic it was about the same commute time that it would take when I took BART.

BART wasn’t a cake walk though because you have to deal with “crazies” on occasion. People begging for money or people drugged out just riding all day. BART police tried to control it but sometimes it’s hard to police. All in all it still was the better choice.

Reading was the bonus, I read so much more when I took bart. At first I was reading books about sales like the One minute Salesman. I was a big Steven King fan so I started reading his books. I remember I was totally engrossed in one of his scary books when this crazy guy started yelling at the top of his lungs for no reason, I think I jumped out of my skin.

The commute was about an hour so I’d spend 45 minutes reading then 15 minutes before we would arrive, I’d plan my day. A check off list always worked best for me, so if I had a question to ask Martha or Michael, I’d jot down my thoughts so I wouldn’t forget.

Maybe I was thinking James needed to order more foam pads, or if I wanted to ask Jeannie advice on how to build up a Personal book. Anything I thought I’d want to accomplish that day

I’d get to the store in an hour and always 30 minutes before my shift. Other salespeople would get pissed if you would jump on the list before your shift, so I’d usually get some coffee and take a look at my section and stock assignment. Maybe I could knock out some things on my to do list too…

Commuting in the Bay Area

When you can take public transportation let the time work for you either by educating yourself, or clearing your mind  before you work. A to do list is also beneficial to plan out your day