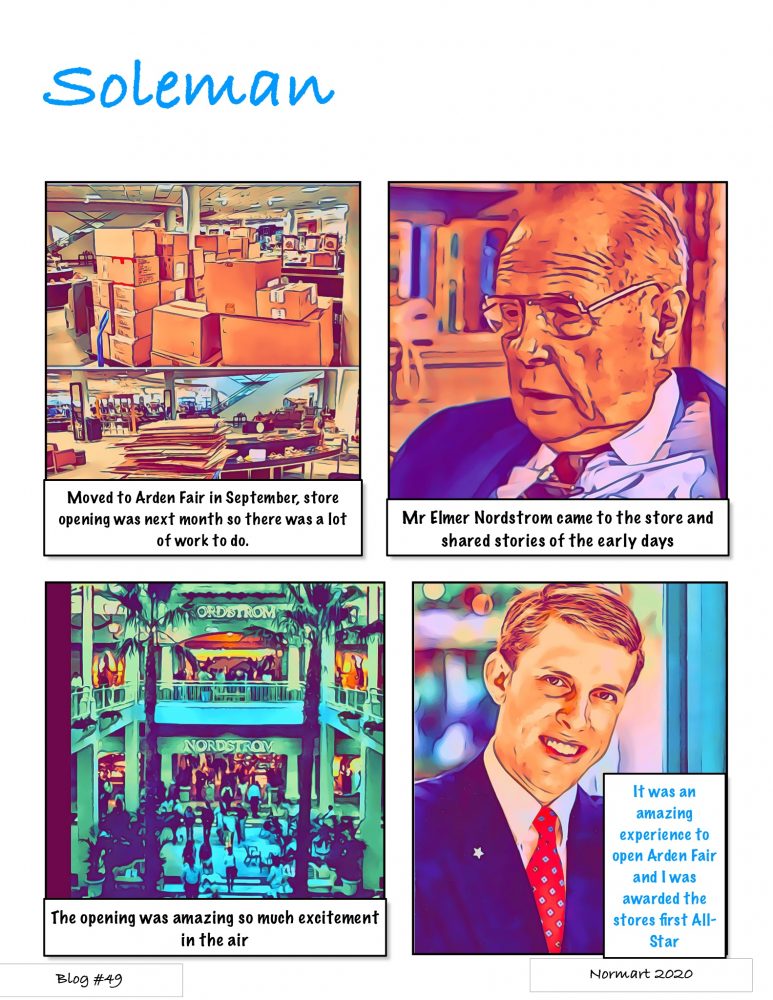 In Blog #48 I talked about the interview at Arden Fair. In this blog I want to talk about opening the Nordstrom Arden Fair store and meeting Mr. Elmer.

So the store was getting cases upon cases of shoes. First we had to construct all the shelving in the back stock room. After the shelves were secure we could start running stock. Steve made paper signs to let us know what should be coming in for the opening to allow room. The display fixtures had to be set up as well. It was pretty cool to see everything brand new. It was a lot of work and a full 8 hours a day for about a month to completely set up the store.

Steve had a lot of the Reps from our brands give seminars on their shoes and the special qualities they each had. it was cool to get to know the reps from the brands. Getting to know the team was fun too, there were definitely a lot of “characters”.

A little background of Mr Elmer:

The three brothers focused on good value and quality, coupled with customer service, and by the 1960s, had the largest independent shoe store chain in the US, and the largest store in the country in downtown Seattle.In 1963, they bought Best Apparel, a Seattle-based women’s clothing store, followed by a Portland, Oregon fashion retail store in 1966. They now offered shoes and clothing for all the family under the new name, Nordstrom Best.

In 1968, all three brothers retired, and the next generation took over – Everett’s son, Bruce Nordstrom; Elmer’s sons, James and John; Lloyd’s son-in-law, Jack McMillan, along with family friend Bob Bender.

So he’s sitting in the chair in front of the shoe team telling us a story of how his brother was waiting on a customer in one of their first stores. His brother was lacing up a pair of women boots and was on his knees finishing them up. the lady stands up and because she had a long dress his brother disappeared. He thought that was so funny even after all those years.

The store opens and as the gates to the store were rising people started clapping. It was such a rush to experience. We were so busy the first day. Later on in the week we had a store meeting in the morning and Jim Nordstrom announced me as the Stores first All-Star. An all-star is nominated each month usually for giving someone great service. the recipient receives a 33% discount for a year, Special Business cards and an All start lapel pin. The store takes a professional picture to place in customer service too. It was a great honor.