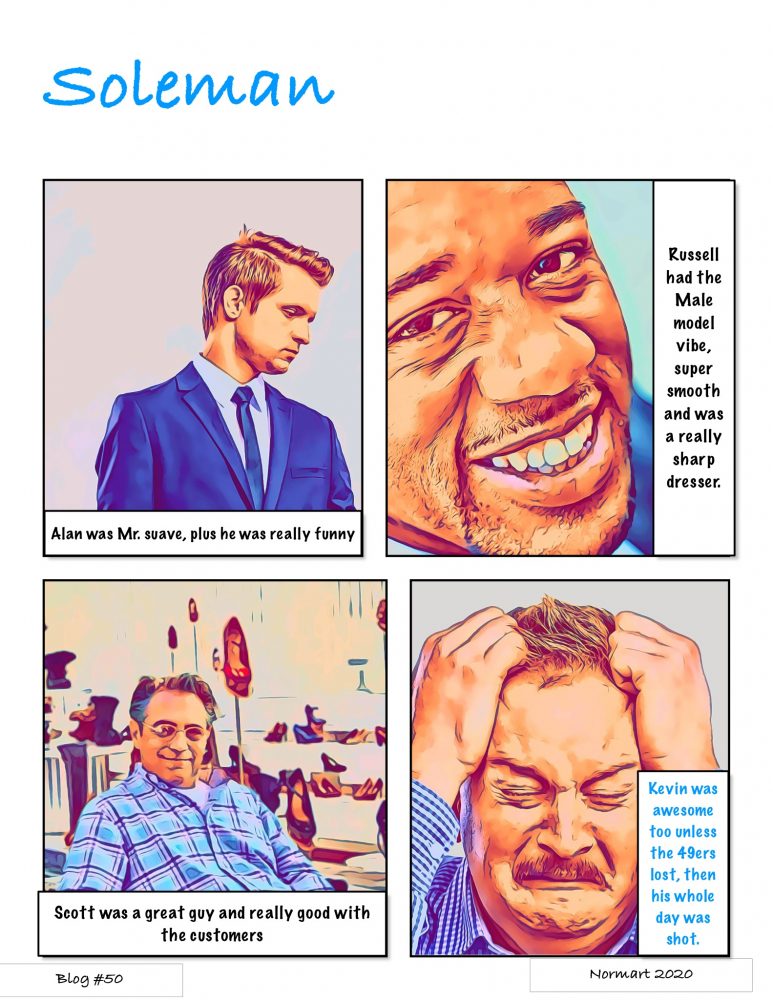 Blog #49 I talked about opening the Arden Fair store and meeting Mr. Elmer. In this blog I want to talk about some of the “Shoe Dogs” that I opened the store with and what it means to be a “Shoe Dog”

Suave, Funny, handsome and fit. What a great combination for a shoe dog. Alan could sell ice to eskimos. He just had a wit about him that made you shake your head and laugh at the same time. Alan was super confident in himself and had a swagger. He was fun to work with. He was a hard worker in the stockroom and would come out and immediately change gears to Sales mode. The customers loved him. We would go out for beers after work sometimes and he was fun to hang out with too. We laughed so hard my jaw would hurt the next day.

Russell was a sharp dresser. He was smooth and had lots of confidence in himself. Russell was dating one of the prettiest woman in the store and she had an amazing personality. She was super friendly, smart and had a great smile. They complimented each other. Russell wouldn’t walk on the floor, he would glide. He talked very quietly  and when he smiled it was like looking at Billy Dee Williams. He was a great salesman as you could imagine and didn’t really let things bother him too much. We had great conversations as he was really funny too.

Scott was an outdoorsy kind of guy. Put him in Flannel and some jeans and he was happy. Of course on the sales floor he’d sport a nice suit. He had the gift of gab, storytelling was his forte. I loved the conversations we had about sports or hiking or life in general. Scott was a great conversationalist and he was genuine. This was his hook with the customers. The boy next door. Someone you could trust. He was great with the customers and was a definite asset to the team. Scott had a good work ethic and you could always count on him.I really enjoyed working with Scott.

49er fan true and true. He owned his own shoe store in a previous life and was super knowledgeable about footwear. He was great with the customers and was usually in a great mood. in fact kinda jolly. Except when the 49ers lost. OMG…what a transformation that would take place. it was almost comical as he was pretty expressive. There was no hiding his disgust when they lost. His whole day was shot and hard as I tried to cheer him up, it didn’t work…Of course the Raider fan in me kind of chuckled inside when this happened but I tried my best to be good and keep the peace on the floor, but man would he get pissed! lol

Those were just a few examples of Shoe Dogs I opened the store with. But what is a “Shoe Dog”?

Phil Knight is probably the most famous “Shoe Dog” of all time. So much so he wrote a book about it called “Shoe Dog”.

The term “Shoe Dog” is an industry slang name given to a veteran of the footwear industry. Someone who has dedicated their life to selling shoes is sometimes referred to as “an old Shoe Dog”

“Shoe Dog” is used with both reverence and respect. A Shoe Dog is an industry veteran who has lived the business and made a lasting contribution through one or more jobs. Shoe Dogs love product and love the gritty details of the business. A sales rep who becomes a product developer and then a sales manager, can be a Shoe Dog.

Footwear insights named the 50 all time greatest Shoe Dogs including my friend David Kahn from Birkenstocks:

According to Anthony Chiappetta 4th generation from chiappettashoes.com, “it’s about having the eye to spot a trend, a great fitting product, when to hold em and when to fold em. Being a Shoe Dog is about finding good product and when to chase”.

So there are many thoughts about being a Shoe Dog out there but one thing is certain, we are a breed apart most other people. Some of the nicest people I’ve ever met have been shoe dogs, also the craziest… lol

There were a lot of other characters on the floor too, the typical romance type things which led to affairs and the usual drama that would follow. All in all, it was a pretty good  group of people and Steve was great to work with. He was a family man and every so often we would all get together with his family at his home. He was a good man and had a great heart.