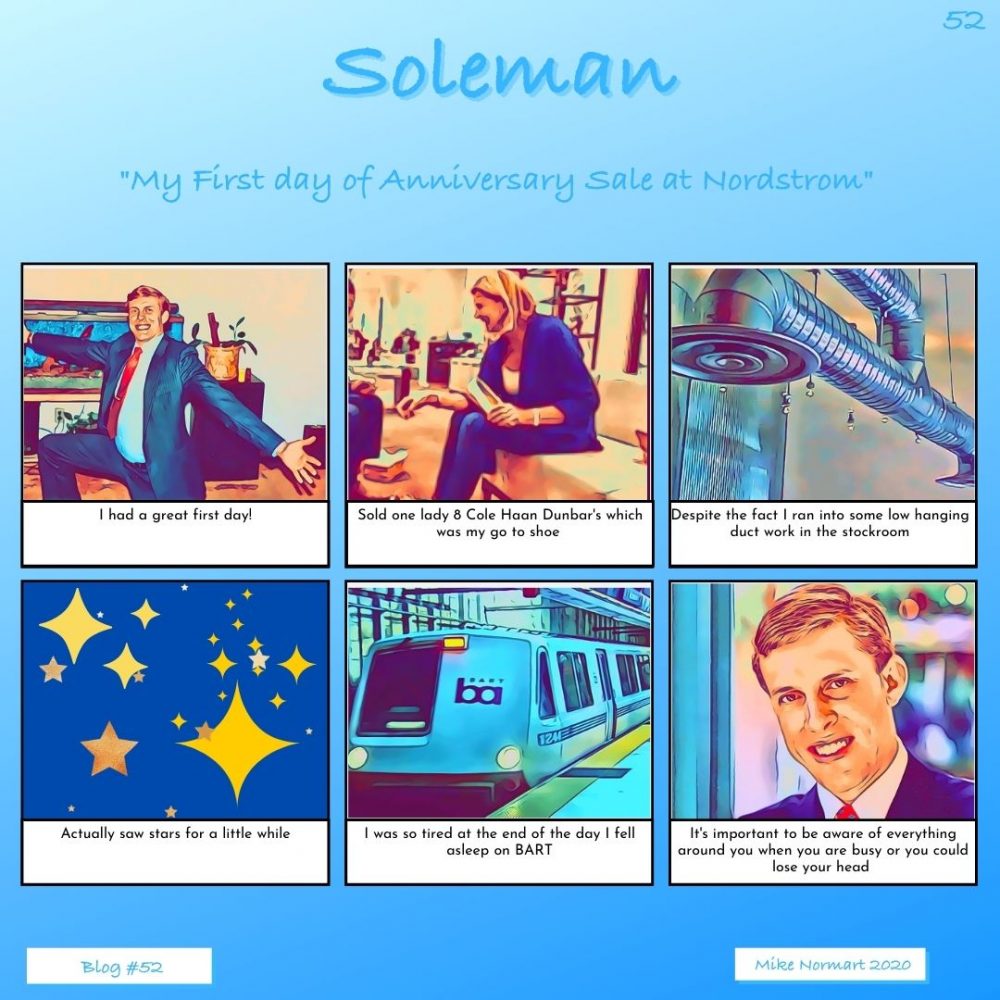 Usually on a normal day we would run a list all day but the Anniversary Sale was a whole different animal. We started out with a list but after a few minutes it was on. We had so many people, Martha would ask if we could wait on two customers at the same time! It was madness but I loved it!

Then it happened…a guy came in with his wife and she wanted to try on my favorite shoe, the Cole Haan “Dunbar”. I could sell this shoe like it was free. I brought out my four pairs, all Dunbars lol. She loved it. She asked me what other colors it came in, some of the colors were still upstairs for some reason, so I ran up there and turned the corner and ran right into some low hanging metal duct work and it almost knocked me to my feet.

Stars in the daytime

I saw stars but I was ok. “Got… to… get… down… there”  I was saying to myself. I was hoping I wasn’t bleeding, or had a big red mark on my face. Got down there with the new colors and she couldn’t decide which colors to buy. Her husband said “ if you like them that much buy them all”. My jaw must have dropped but I tried to maintain my composure. 8 Dunbars! This will be my biggest sale ever!

The rest of the day was pretty consistent and then we had a lull for about an hour so I sat down. Martha asked if anybody would stay longer and of course I did. This is “Prime Time”. I didn’t have the extensive list like Jeannie did, so I had to do it the hard way.

I had an amazing first day though, so I didn’t feel the pain my feet were trying to convey to me. It was late and had to catch BART home now. I have to admit I fell asleep on BART, thankfully Fremont was the last stop so someone woke me up. Tomorrows going to get here before you know it so I need to catch some sleep.

Re-cap my Anniversary sale at Nordstrom the first day

When it’s super busy, its easy to lose your head and forget about the important things.Customer service is still important and it’s important to keep that in mind when it’s chaotic on the floor. Oh yeah, Watch your head too, as low hanging duct work can leave a mark. Luckily for me , I just hurt my pride.