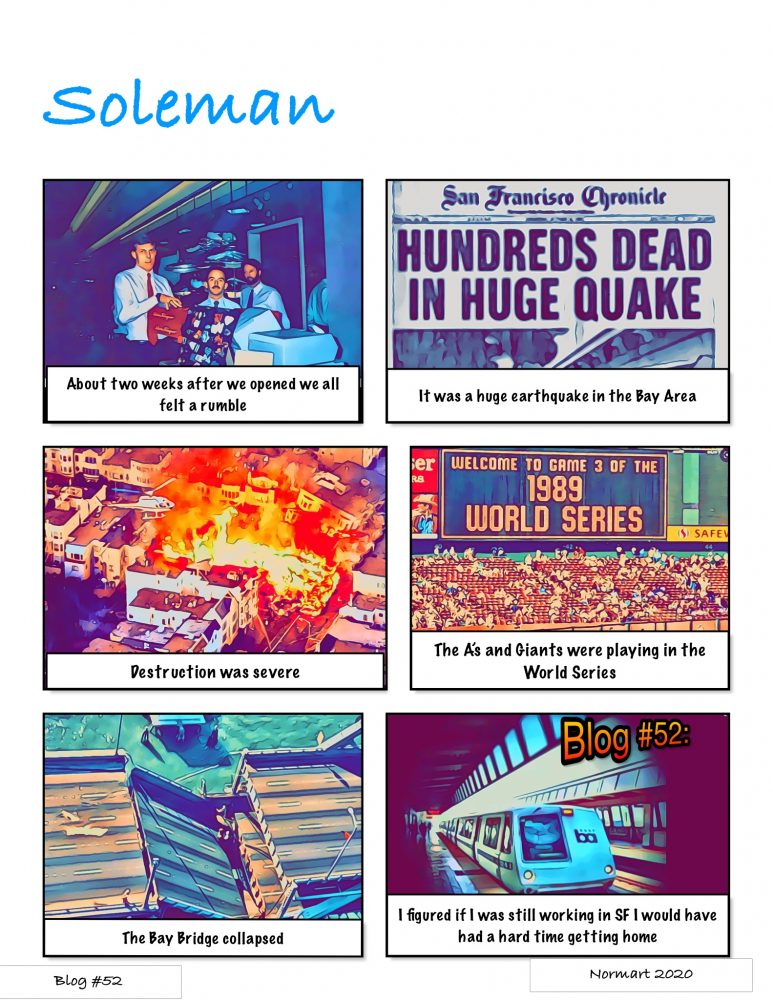 So, in Blog #51 I talked about people I met at Arden Fair Nordstrom when it opened. In this blog I want to talk about escaping the Loma Prieta Earthquake in 1989

The store in Arden Fair was really busy the first few weeks. I was still glowing about being named the first store All-Star. We were all busy taking care of customers and then it happened…

A rather strong rolling sensation occurred which reminded me of the earthquakes I experienced in Southern California. But in Sacramento?

It was October 17, 1989. It was reported rather quickly that a massive earthquake struck the Bay Area at 5:04 pm.. It was a magnitude of 6.9. It killed 64 people that day. It also occured the time the Oakland A’s were playing the San Francisco Giants in the World Series. The Cypress structure collapsed during the quake, resulting in 42 fatalities. Another person was killed when a portion of the Bay Bridge collapsed onto the lower level. There were fires and billions of dollars of damage.

Scary thing was I used to travel through the Cypress structure and I also took BART, which got stuck underneath the Bay for a while. I usually got off around that time so who knows where I would have been. I felt so sad for all the victims and felt fortunate I had moved my family when I did. I was also thankful that my friends in San Francisco were all ok as well as family members who still lived there. One of my relatives was actually at the World Series when it happened.

Below is Martha’s story on her account that day in San Francisco:

The city of San Francisco was hosting game three of the World Series at Candlestick Park on October 17, 1989. The Nordstrom Store in the San Francisco Center had been extremely busy due to all the visitors in town for the big sporting event.  The Salon Shoe department was buzzing, the registers were ringing, sales associates were attending to multiple customers on the sales floor, and sales goals were being achieved.

At 5:04 p.m. all the sounds came to an abrupt halt.   The earth beneath us began to shake with such vigor that the building began to role from left to right, up and down and we were moving along with it.  We had never felt anything like this.  I had experienced several earthquakes but this one was different.

We quickly gathered the customers and we huddled all together under the door frame to the stockroom.  People were hanging onto the frame and their bodies were swaying back and forth. The earth didn’t stop, it kept moving for it seemed like a very long time.  It actually lasted fifteen seconds but it was the longest fifteen seconds that one can experience. When the building stopped shaking, we immediately checked to make sure everyone was ok.

No injuries in the store

Thank goodness no one was injured.  Nordstrom store management asked everyone to stay in the building for their safety.  The electricity was cut off, so we could not see the damage to the store and we were unable to communicate with anyone outside the store. In 1989, people did not have cell phones or internet access.

We did not know that a section of the Bay Bridge collapsed and the soft soil of San Francisco’s Marina District gave way, homes were on fire and many buildings had collapsed.

The employees comforted the customers and each other.  We cleaned up the sales floor, but could not see what had occurred in the stockroom since it was pitch black.  Nordstrom management did their best to try to inform us what was happening outside the store.

At approximately 9:00 pm, we were given the green light to exit the store with caution.  Without electricity and with only a flashlight that was provided by the store, the streets of San Francisco were dark.  Many employees utilized public transportation to get to and from work, so we worked together to get everyone home safely.  The employees who drove into work that day were generous to drive others home.

I returned to work the next day to help clean up the store.   As one would imagine, after a 6.9 earthquake, the stockroom was in a disarray.  Shoes were scattered all over the floor and at one section of the stockroom, the rack had been pulled out from the wall and the sheet rock had separated from the building. The majority of the employees came together to help get the store ready to reopen. The store was closed for a couple of days to ensure everyone’s safety and to make repairs.

This was an experience that will never be forgotten. Unfortunately, 64 lives were taken that day and many were injured.  We were very grateful that we were safely guarded inside the walls of the Nordstrom San Francisco Center.

Wow,thank you Martha for this incredible account of being there first hand.  It was a day that holds on to me even today…