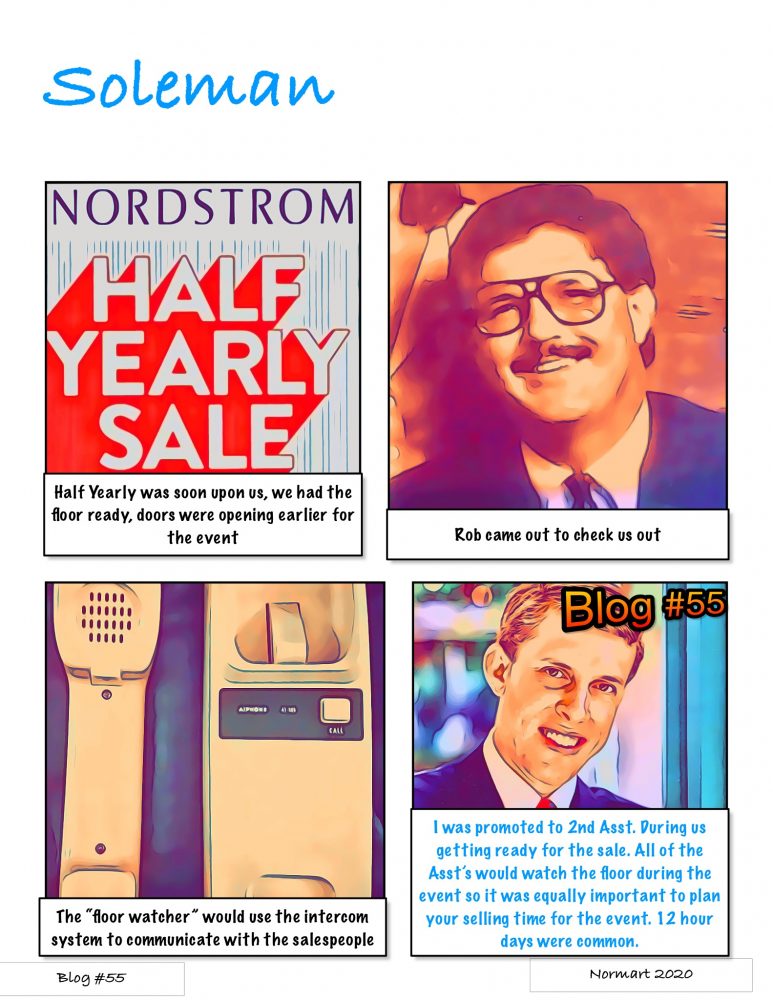 So, in Blog #54 I talked about filling the sale racks for the Nordstrom Half Yearly Sale. In this blog I want to talk about being promoted to 2nd Asst..

So we got through the overnight hash night. Stickered all the sale shoes. Reset the floor and filled up the racks. All that was left was to open the doors early and experience a sale like no other. I got there early, had a double Latte and was ready to go. The store gates started going up and people actually crawled into the store. I must have stood there with my mouth open.

I forgot to mention earlier, I was promoted to 2nd Asst. during the preparation of getting ready for the sale. It wasn’t much money unless you got in some selling time. It was a great opportunity though, so I was grateful for the opportunity.

I was concerned about being able to support my family but Steve assured me I would get selling time too, so I accepted. Little did I know what I was in for. It was great experience though, you learned quickly when 100 customers are on the floor. Basically the floor watcher looks to see that all customers are taken care of. You really need eyes in the back of your head sometimes.

Back to the sale

So back to the sale, People were crawling under the gate as it went up. Rob, our Merchandise Manager shows up to help watch the floor. He was something to watch. So calm, collected and really funny. “Weeeeee haaaave a lady waiiiiting!”,  He’d call out on the Aiphone.

Basically the Aiphone was an intercom system to communicate with the salespeople in the back. Everything Rob said was like a musical chorus, “I see you have one, how about twoooooo”. He kept me going that day, he definitely had a very unique style. Steve and Jim were way more serious when watching the floor, this guy was like a stand up act.

I didn’t have to watch the floor the first day except for a brief break, it was so busy. The floor watcher was constantly in motion to make sure no one was missed. We had a 60 second approach rule, once they hit the carpet, we were supposed to greet them. There was a small clipboard we used to keep track of everyone who was there, lunches and our hourly flashes. Yes thats right we had to beat the hour from last year. We had a saying at Nordstrom, “you are only as good as your last flash”.