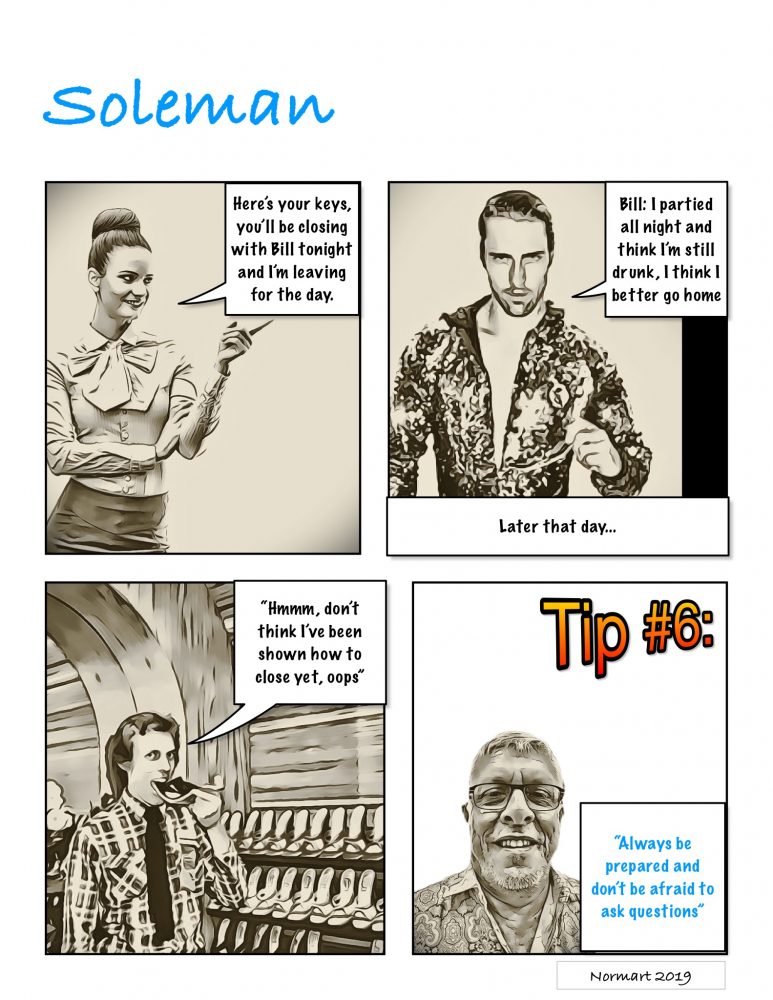 Solemanstudios – Blog #6:
“Be prepared for anything”
So, in Blog #5 1/2  I talked about how my father taught me a valuable lesson that I’ve carried for my entire life with focusing on Attention to detail.
In this post,  I want to talk about being prepared for anything. I know I sound like a boy scout (sounds like an opportunity for another flashback sequence…) but it’s so true. It’s easy to get overwhelmed; sometimes not knowing how to ask the right questions.
One day, the Store Manager said I would be closing with Bill, he was a guy I worked with. He was supposed to teach me how to close the store, because my manager was leaving for the day. So 3:00 pm rolls around,  and Bill comes into work dressed in a gold, sparkly outfit  and reeks of alcohol. He said he had partied all night, and was still drunk. So my guess was he couldn’t close the store with me.
I wasn’t really questioning his choice of outfits (or why he was still wearing it at 3pm), but questioning myself if I could close the store alone (I’d never closed the register at night because I usually worked in the daytime).
I was so angry at Bill for putting me in this situation.  But at the same time,  how could I be angry with a drunk guy in a gold sparkly outfit?…Unless it’s 3pm in the afternoon….nice guy though.

So, one solution was to call the store manager, but I didn’t want her to think I couldn’t handle the job. So,  I turned to the store manual and figured it out on my own.

By the way, Bill had a reputation for being a party guy. Sadly a few months later,  he was beaten to death in his apartment. He was a good guy and kind of a cartoon character of sorts. If there was a three panel comic strip, he would have said the punchline at the end.

If you know you are closing the store for the first time, or really doing anything for the first time, ask lots of questions. Know what’s involved and anticipate issues you might run into. If I had asked the Store Manager how to close before she left, I wouldn’t have had that anxiety feeling of “OMG!” what now?! I figured it out in any case, so it all worked out.