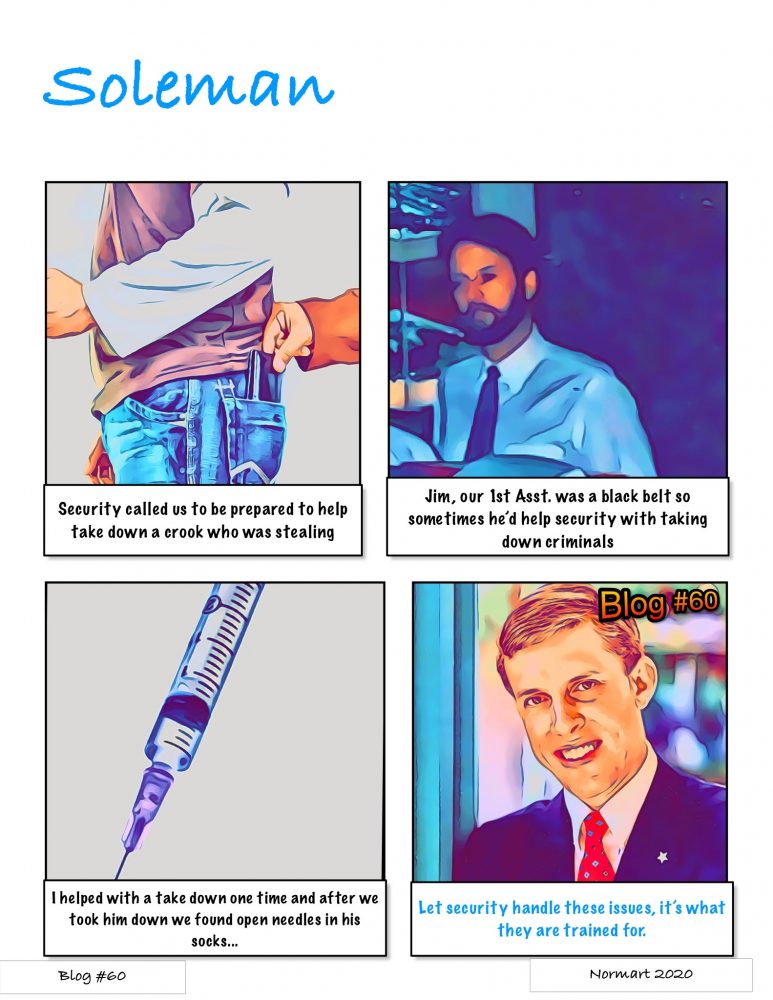 So, in Blog #59 I talked about All-Stars & Pacesetters. In this blog I want to talk about dealing with criminals.

Every so often our Security department would have a situation they would need help with. Being 6’4”, I would be asked to help out sometimes just in case. Usually it wouldn’t be anything major and if Jim was around he’d usually take care of it. I mentioned early in blog 58, that Jim was a blackbelt. He would punch a metal post to make his knuckles develop callous on them.

He liked to tell stories of how he’d take down idiots with his Karate. One that pops into mind was he was pumping gas and some guy started staring at him. Then the guy actually said to Jim “what are you looking at?”. So when Jim would tell these stories he would say them very slow and very expressive. This guy comes over to say again in Jim’s face “I SAID, WHAT ARE YOU LOOKING AT?”. Then Jim says, I told him I was looking at him on the ground because that’s where he ended up, with a wry smile.

So, one night Security calls us and says there’s a big guy stealing from people in the store. Jim happened to be there so I wasn’t too worried. They had three of us stand ready. The guy walks through our department, I could see security tail him then they said “Excuse me sir”. The guy starts to run and Jim takes him down in a split second.

We were called to hold him down while they cuff him. As they were searching him they found some needles in his socks that were open. “Wow, that was close” I thought, especially since I was holding the legs.

Needless to say that was my last time. In these cases I think you let the security department handle the rough stuff, you never know what could happen. I remember my dad telling me about a security guy at Sears being slashed in the face with a knife. Forgot about that until this day happened. I’ll stick to shoes…