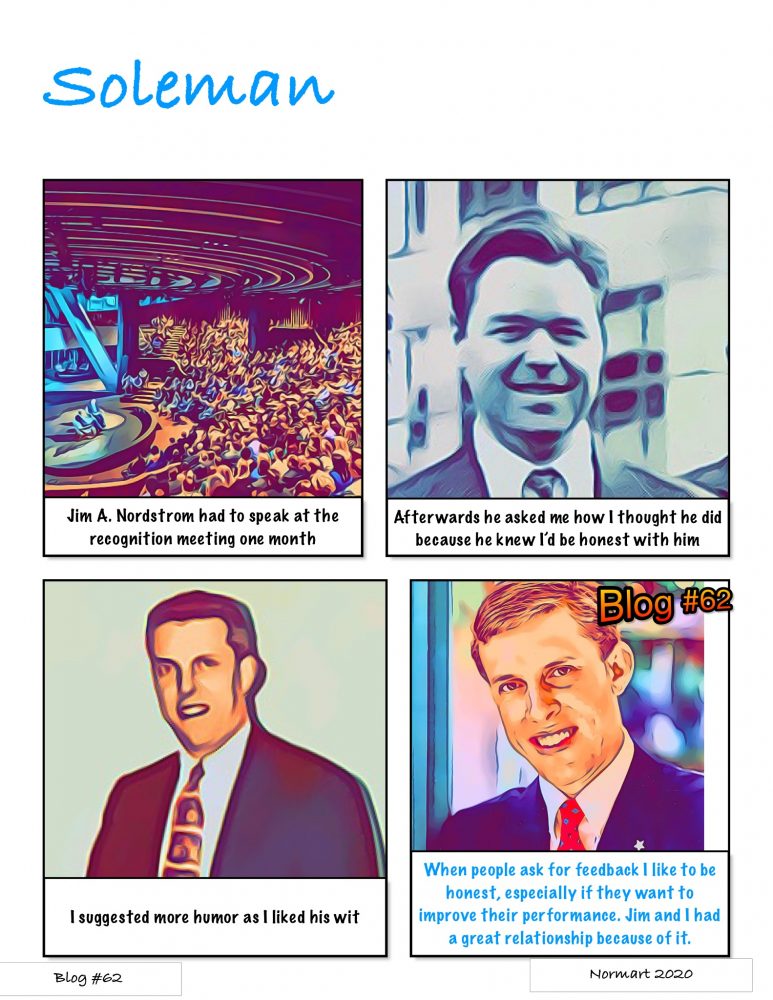 “Healthy relationships of all kinds are usually composed of honesty, trust and respect”.

So, in Blog #61 I talked about hiring great people. In this blog I want to talk how honesty is the best policy.

So Jim Nordstrom and I were developing a great relationship. He’d come down to the floor and chat with me on how it was going and always asked  if there was anything he could do to help.

I was very appreciative of him making me an All-Star at the opening so I wanted to make him proud.

One day we had regional Recognition meeting and Jim was speaking in the meeting. Nordstrom would recognize the great performances by Department managers and Buyers. The All-Star would also be announced.

Jim had a dry sense of humor which I liked, he always made me laugh. This time however he was pretty straight laced and kept his humor to a minimum. I understood, as it was a regional meeting but I really enjoyed his dry wit.

We all get back to the store and I get called into the Store Managers office. I couldn’t help wonder if I was in trouble or if he just wanted to chat. You never know with customers sometimes.

I get to his office and he asks me to have a seat. “what did you think of my speech?” he asked. A pit developed rather quickly in my gut as I wasn’t wild about what he said but still thought he did a good job.

“I like it when you show your dry wit more”, I said. Uhhh did I just tell him the truth on what I thought of his performance? The pit grew just a bit larger and definitely heavier.

“That’s why I called you up here, I knew you’d tell me the truth”. He felt he was a little flat as well and said most people just flatter him. He thanked me for my honesty and I went back down to the floor. I really didn’t know what to think until we had another recognition meeting.

The next Recognition Meeting

He definitely was a lot more witty. He glanced over to me and gave me a look and I put up a thumbs up.  I was so happy that day and was happy for him too, he nailed it. From that day forward I decided to be as honest as possible (with tact of course). Honesty is the best policy…

One thought on “Blog #62 – Honesty is the best policy”