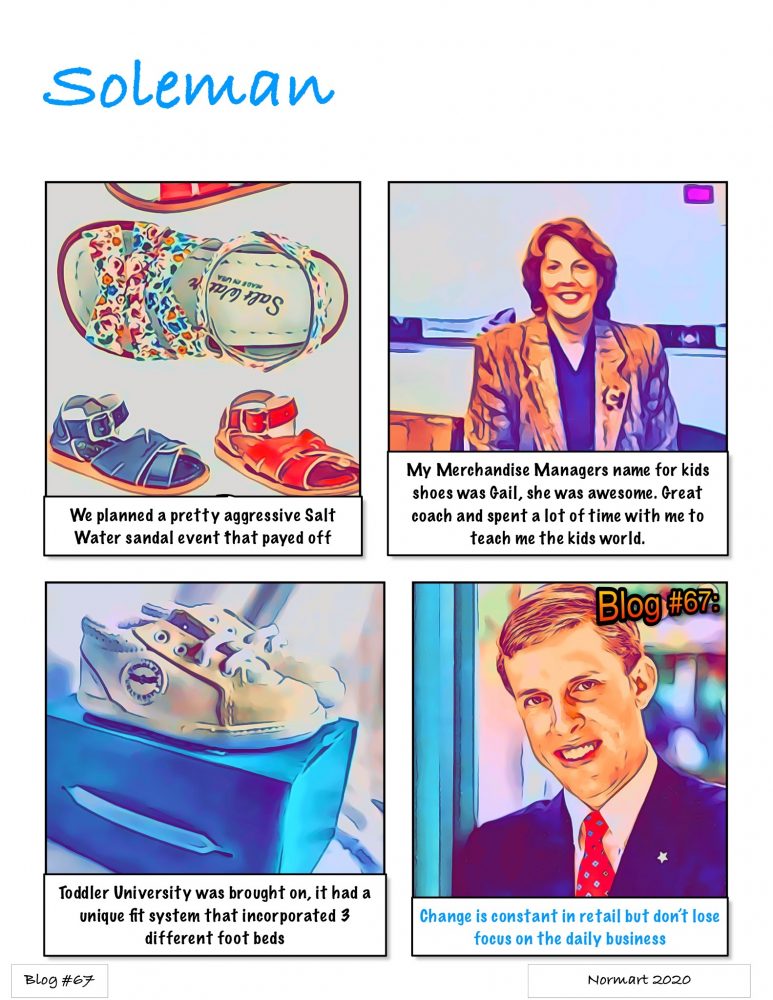 “There is no magic formula for great company culture. The key is just to treat people the way you would like to be treated” – Richard Branson, Founder, Virgin Group

In Blog 66 I talked about how problems are gifts because you can learn from them. In this blog I wanted to talk about how you need to focus on the daily business and also highlight Gail as a special mentor in my career.

So we had Saltwater sandals coming out of our ears. Our entire stockroom was stacked to the brim and the area that we found in the fixture room was also pretty full. We were ready. The store opened and we were busy from the first minute we opened. I was planning on working open to close today to makes sure the first day was successful.

My Merchandiser, Gail was also coming in for a visit and it was the first time I would actually meet her face to face. She told me she would come in right around lunch time so we could sit and chat. When she got to the store we were running numbers so it would be a little while before we actually could grab a bite to eat.

I have to say, you meet certain people in your career that leave an impact on how you grow as a professional and a person. Martha was a good example of that, I spoke about in Blogs #36 thru 47. Gail is another such person.

I met her for the first time during a very chaotic day. We had spoken quite often during my short time in Kid’s shoes over the phone but not in person. Gail was the type of person you feel comfortable right off the bat. She has a warmth about her from her smile to her easy going nature. When she talked to you, she spoke clearly and her expectations were very clear on what she wanted to see from her buyers. I liked her from the moment I met her.

Gail is very knowledgeable about the Kid’s area and it made me excited to be able to learn from her. She’s the type of person you want to make proud of you. I’m sure I made her a little nervous about somethings because I had a lot of big ideas and kid’s wasn’t really about that. However it was an amazing experience for me and I learned a lot in the process.

Gail had a very funny sense of humor and she used it to her advantage. I’ve kind of incorporated humor as a tool in my coaching efforts as well. I have also witnessed the “other” side of her and I tried my best to minimize that experience. It was always self-induced lol.  I communicate with her from time to time even now as I respect her and appreciate her as a mentor and just a fine human being.

Another exciting thing that happened around this time was the a new brand called Toddler University. It was a brand that stated it solved the width issue. Each pair of shoes bought had three different insoles that would customize the fit. It was widely successful and the team from Toddler u were fantastic to work with

So in summary we had a big event, a new brand launch and a visit from our merchandiser. It’s important to focus on your daily business and have a game plan each day to execute these things so the most important thing is accomplished and that’s taking care of the customer.

Gail was great at explaining time management skills and being the example of how to conduct yourself in a crazy chaotic retail landscape.