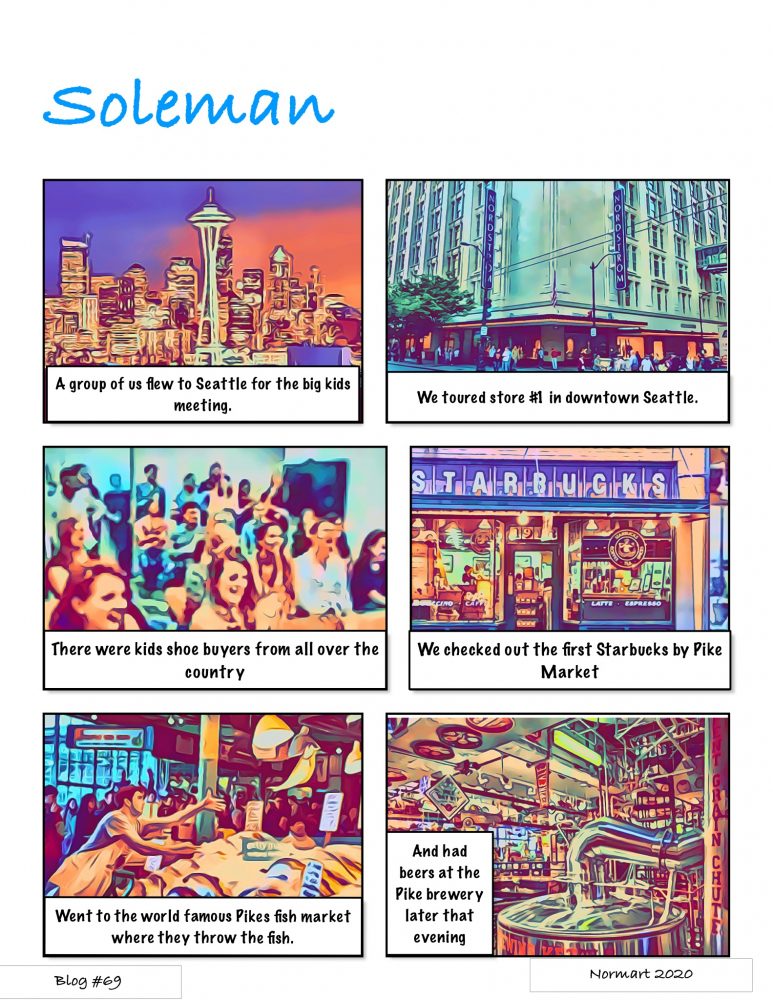 “Customers will never love a company until the employees love it first.”

In Blog 68 I talked about how Friendships are important in your retail career. In this blog I wanted to talk about how my first experience in a Corporate office made me feel.

A group of Kid’s Buyers flew from the San Francisco region to Seattle to attend the Kid’s Corporate meeting. I was nervous about this being my first corporate meeting but Pam calmed my nerves down somewhat. Funny thing was it would be the first time I’d meet her and Lorrie as well. Most of our interactions were over the phone and I hadn’t been in the kid’s division that long to actually meet them.

We arrived in Seattle mid-morning and we settled into our Hotel rooms which were close to the store. Gail wanted to show us around the area before dinner which was later that evening. We went to a few famous landmarks such as the first Starbucks store, Pikes market and Pikes brewery right before dinner. We didn’t have time to see the Space Needle which is also a famous place.

The first store that Starbucks opened was right across from Pikes Market. It was a smaller Starbucks, a guy was playing a guitar for tips outside and there was a line of people waiting to get in. It was really cool to see it with all the merchandise that said “first Starbucks store” and all. Truth be told aside from the hoopla it was just another Starbucks.

Definitely a highlight reel. This fish market was written about in the book Fish! It was a Nordstrom read all buyers had to read in the early 2000’s. At this time in the 90’s it was still just a story people talked about. We get there with our Starbucks coffees in hand and there is a lot of shouting going on. As we get closer we see the employees “shouting” the orders to the butcher and then throwing the fish over to him. Some of them where huge too!. It was a very vibrant and electrifying atmosphere which made for a good time.

The brewery had its Fermentation tanks in plain view and we took a tasting tour and learned about the history of the Brewery. It was fascinating to say the least. The brewery was founded the same time I started my Nordstrom career in 1989 so it stuck with me. They produce quite a few barrels a year so it was really cool to see the operation. We had dinner that evening there too. I had an amazing burger.

The next morning was the big meeting. There were Kid’s buyers from all over the country. It was intense! We had a few words from The Nordstrom family then the head of Kids spoke. Her name was Dawn and she was really nice. They talked about how service is always the number one focus and how we could take the kids shoe division to the next level.

The best part though was after the meeting. Networking with so many different buyers  around the whole country was invaluable. I picked up so many great ideas on what others were doing I couldn’t wait to get back to the store. It was such a great trip on so many levels.

I learned being prepared for the questions people might ask is so important. Anticipate what they might be is the key. Truth be told you could prepare for a few days for just a five minute encounter. but nothing is worse than not being prepared. you still might get stumped, Blake was really good at asking those types of questions, but its the game. Cat and mouse. if you are on your game you will do well, even if you can’t always answer all the questions its a learning thing too.