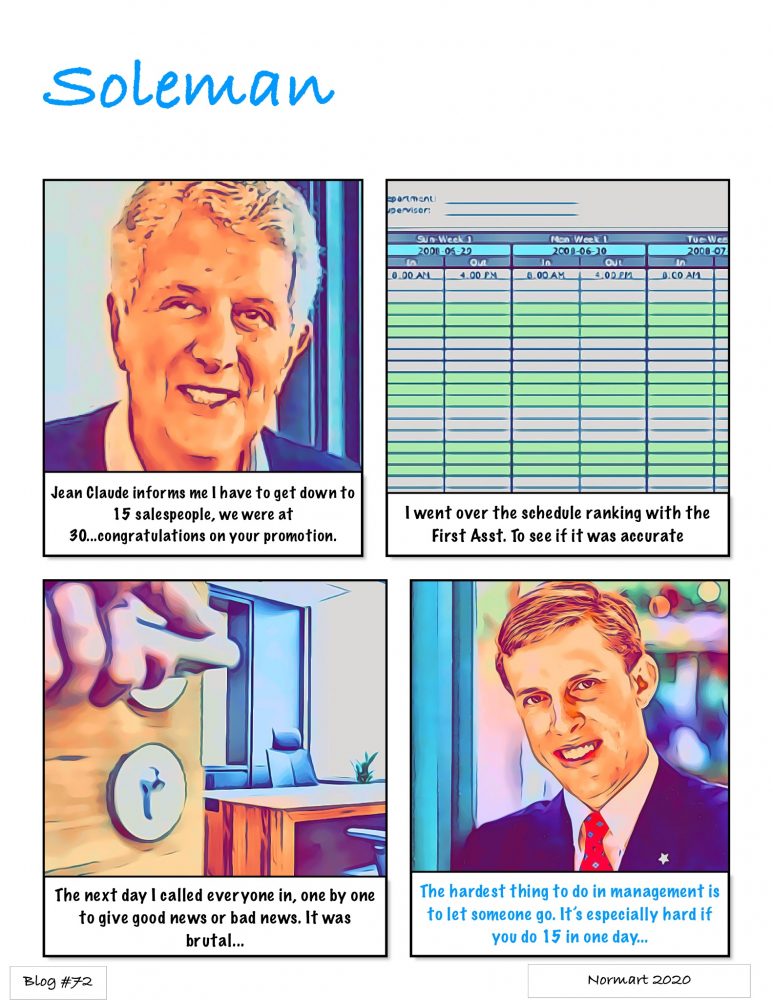 It’s fine to celebrate success but it is more important to heed the lessons of failure.” -Bill Gates

In blog  71 I talked about how success brings opportunity. For this blog I want to talk about the hardest thing a manager has to do, terminate employees.

So I have had a pretty good run with Nordstrom so far. Turned a kids department around by taking some chances. Hired some great employees and they made a difference. Now, I get promoted into an area that was run by a great salesperson who got promoted to the Manager/ Buyer position. Being a great salesperson doesn’t always translate to managing people as I would soon find out.

I survived my first stock walk with Rob and it was brutal. Nothing was in order. It was a wonder people could find things in the stock room. Where to start. Rob gave me a three page yellow legal pad that kinda told me where. But the buyer in me wanted to see about the mix of merchandise first. Mistake number one…As I’ve said in previous Blogs “people are your biggest asset”, I didn’t spend enough time with the people part the first week, mistake number two.

Jean Claude calls me up into his office on the third floor early in my first week.

“You have 30 people but the budget calls for 15, you need to make some changes…

“It’s my first week, I don’t even know everyone yet”, I said. “ well that’s why we put you down there, to figure out this mess; congratulations on your promotion”, he said with a wry grin.

I knew Jean Claude had faith in me and I didn’t want to let him down. Rob gave me some good starting points but to get rid of half the team in the first week was brutal.  I called Rob and he reiterated what I already knew “ Dude that’s brutal”. “Start by the ranking, that’s all you got”. So I sat down with my Assts. Managers and told them what was going on. We went over the schedule which was ranked by who was the top to bottom team 1-30.

The day that I had to terminate people finally came, so I made sure I had a little office area for the day and called each employee in ranked #1-30 but by alphabetical order to mix it up. Each person would come in and I would say one of the two things:

“I want to thank you for all your hard work in our department based on your ranking, we are keeping you on, be mindful of the fact we are adjusting our size of the team.”

This day was brutal. I was sworn at, cried at and thanked. then I had one lady call me and said

“ Are you the asshole manager that just let my son go?” “I thought Nordstrom was a great place to work?”. I apologized but also said I couldn’t discuss the specifics and if they had further questions to contact our HR dept.

It was tough. Letting people go is never easy, even if they deserve it. But when you don’t know them that well, it’s tough. There’s a pit that forms in your gut that doesn’t go away for awhile. Being in management for awhile now it wasn’t like I haven’t done it before but it’s never easy. You are affecting people’s lives. I tried my best to be compassionate but they heard one thing and one thing only.

I went home that night, went out to the backyard and had a few beers. Wanted to be alone for sure…