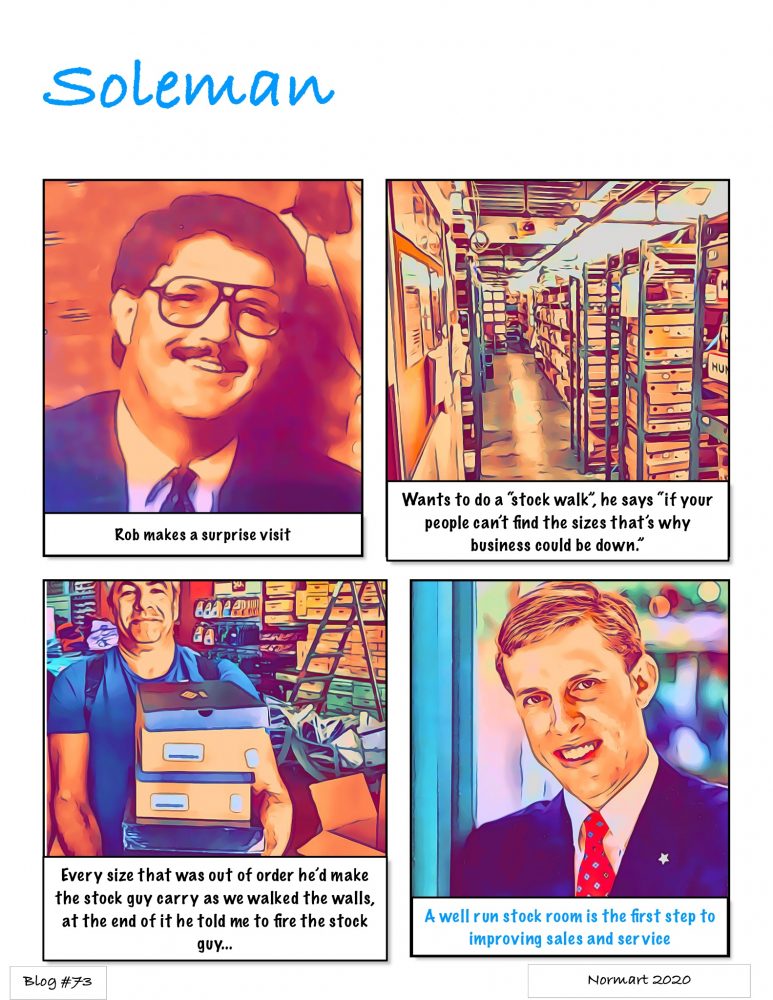 In blog  72 I talked about how hard it is to terminate employees. In this blog I want to talk about be organized in the back stockroom.

So I got through one of the toughest weeks I’ve ever had in my career. There were so many emotions from that day. I really felt bad for everyone who was let go, but we had way too many people and the crazy thing was, our stockroom was still a mess. Good news was, I still had a week to get it straightened out before Rob came back.

The next morning I get a call from Rob, “Mikey boy, I’m on my way, surprise”. Shit…we had made progress by reassigning the sections in the stockroom and expectations going forward but it was still rough. “Couldn’t wait a week to see what you’ve done, plus you probably need some cheering up after what you had to do, out…” lol got to love the guy, out…

Rob arrives a few hours later as he was based in the Bay Area. He always has a ton of energy and on the move rather quickly. He’d usually come into the store with his shades on and his Nordstrom uniform “Blue blazer”. “Mikey boy, get last weeks notes, let’s goooooooo!”. Always trailed off the last word for emphasis too.

I was up front with him on where we were and what we were trying to do. “Don’t you have a full time stock guy?”. Yeah we do but he’s not that quick. “Get him!” Rob said with authority. I get out stock guy and Rob says to both of us, we are going to do a stock walk. I’m going to look at the sizes in the wall and pullout the ones out of order. You stock guy will carry what I pull out.

My stock guy looks at me like “ is he kidding?”. We went down the first row and the guy was already carrying 20 boxes. “You get the point now?”. Put these away now in order and then start from the other end of the stockroom and start fixing this mess”. He leaves and I said “that was brutal”. Rob laughs and says we aren’t done yet. He starts pulling out more shoes out of order and now I’m carrying them. “Ok I think you get it”.

“Mike, the stockroom is a direct reflection of how you run your business” . This is where retail Rob kicked in. He always had great things to teach me and the longer we were together the faster he talked. It was incredible. “Compliment sandwich” at its finest, alway start out positive, then slam you, but end on a positive note.

Some people call it a “shit sandwich”. So good advice as above, then this, “you aren’t going to make it, if our visits are like this too often”. Don’t forget to end on a positive note Rob…”but that’s why I saved you from kids, because I knew you could do it”. Bingo….Have pride in your Stockroom and your business will improve.

He was right again, if they can’t find the shoes it’s harder to sell them. The salespeople will have pride too so it’s a lot deeper than just have things neat. It’s getting people in the right mindset too.

He started to leave, then stopped and turned around. “Uhhhhh, make sure the stock guy is gone when I come back next week”. Wasn’t sure what he meant by gone. “Gone?” I said. “Yeah fire him, you’ve had enough practice now”. I think my mouth hit the floor, so I got rid of the stock guy too and started to interview. Jean Claude said there was a guy in “The Rail” clothing dept. upstairs we could have. The Rail was junior clothes for guys.

I’ll talk to him tomorrow…