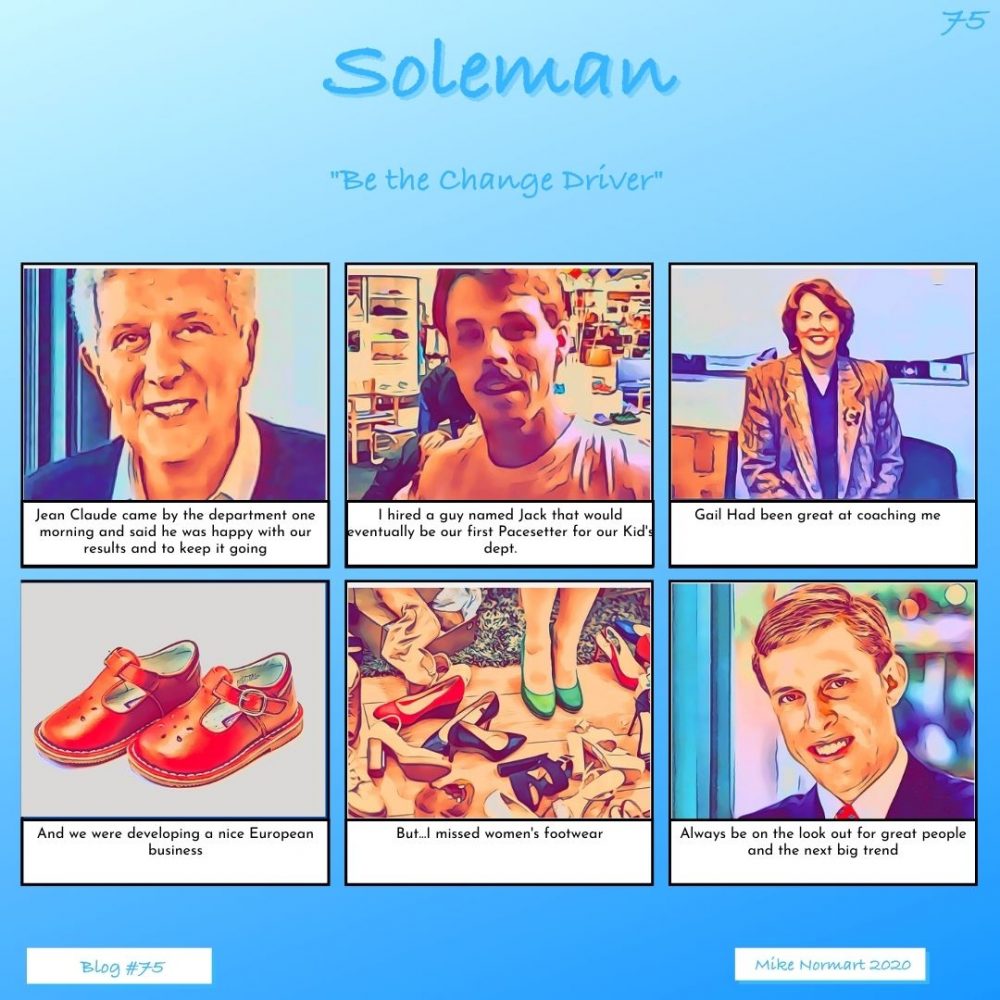 In Blog 74 I talked about The corporate business trip to Seattle. In this blog I wanted to talk about how You must be the change driver.

After being in Kid’s shoes for a little over six months, I started to see the fruits of my labor. Our business was going great, so much so that Jean Claude would make it a point to stop by and tell me how happy he was with our results. It took some guts and determination to get there. Especially when people would tell me “you can’t do that in kid’s shoes”. It just made me go do it anyway.

Arden fair was a great Nordstrom store, I guess being part of the opening team made me have a sense of pride for the store too. It made me happy to see the store do so well. Every morning we would arrive at the store, we would have to climb 3 flights of stairs to get to the top.

The morning routine would be to climb the stairs, then go to the area where all the sales numbers were posted. They would have several books out, near where the hourly employees would clock in. There were books for each department and whether you made your day or not.  there were the employee sales for the day as well. I’d always check both.

Kid’s shoes was always tough to get people to hire for. Part of this was because the pay structure was different. Ok it was lower. In Women’s & Men’s shoes you made your hourly rate which was usually $10 an hour (1990’s), or your 10% commission rate which ever was higher. In kids shoes you had buckets. So if you hit a certain SPH (sales per hour) your commission rate would be higher.  Issue was the volume was much lower so to hit the higher bucket you had to be a hustler.

Needless to say there weren’t many Kid’s Pacesetters to be seen. Until Jack came to our department that is. One of our employees went to women’s shoes, so we had an opening and Jack applied. He was a handsome young man with a very nice personality. I hired him a few days later. He was a machine on the floor, his numbers were unbelievable by kid’s standards. I hit the “Jack”pot”.

I could tell he would be a Pacesetter at the end of the year after the first week. Most of the other employees started to complain he was a floor shark. Basically he didn’t wait for others to approach the customers, he was on it. It made one of our other employees start to sell more too. It gave everyone a new sense of urgency.

Our European business was really starting to take off too, as I mentioned in an earlier blog. The items weren’t found in many of the other stores in town and they were pricey, which our top people loved. I made sure I beefed up the quantities on those items.

Even though everything was going great, I really missed Women’s shoes. Kid’s shoes gave me a solid foundation, Gail was an amazing mentor but I was getting restless. I felt I made alot of positive changes which drove our business. What was missing?

I figured this out one day when I was helping a customer and this kid was running around the chairs non-stop. Of course his mom didn’t do anything about it. I edged my size 12 foot just ever so slightly in his path and he tripped and started crying. I apologized to the customer and she said “It’s not your fault, he was being a brat”.

At that moment I figured it out. I  loved the ever changing fashion and high volume of the Women’s floor. I thrived on chaos and making it better but couldn’t find my passion for the product. Yes, the product was cute and all but to me it was more on improving the processes and running a great department than getting excited about what the new pink patent mary jane style would be.

What to do? Part of my success in Kid’s was to be the change driver. With that being said it wasn’t enough. Gail had been so good to me it reminded me of when I left Jim at Naturalizer. I felt guilty for even having these thoughts.I wonder if I should call Rob..

“You must be the change you wish to see in the world.” — Gandhi