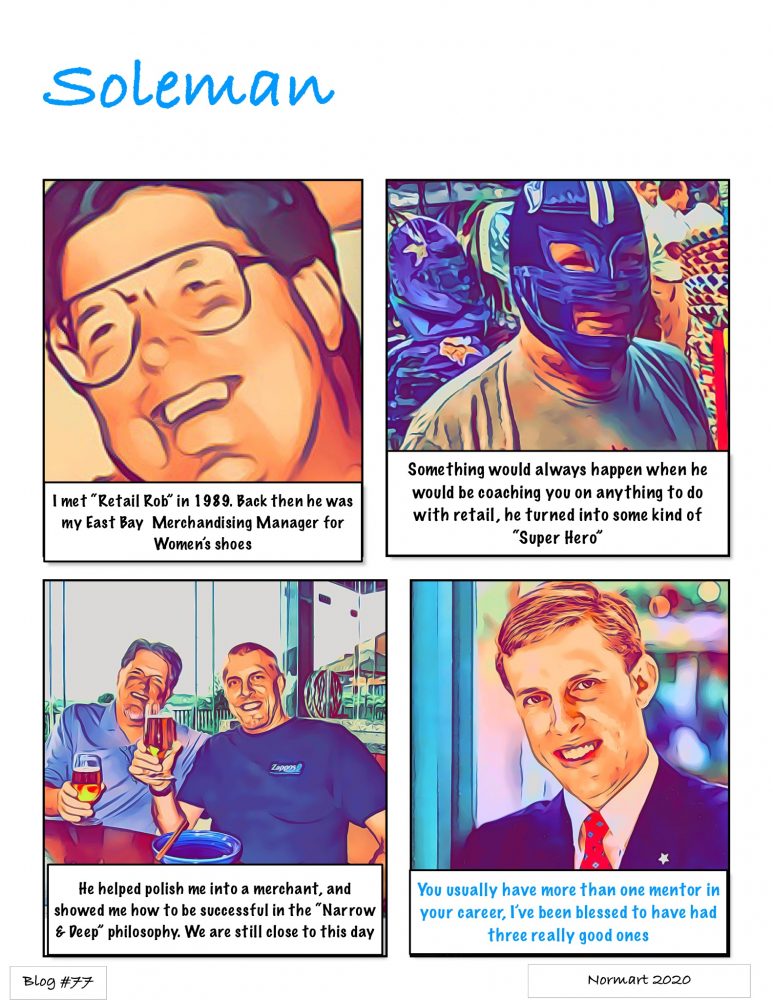 In blog 76 I talked about vendor relations. In this blog I wanted to talk about  my mentor Rob’s influence on me into the narrow and deep philosophy.

I met “Retail Rob” in 1989. He was my merchandise manager at Nordstrom in Women’s shoes. I would say one of the biggest influences of my success over the years I learned from him. “Narrow and deep Mikey boy”. Don’t miss a sale on your hot items. Create a never out in your 80/20 items.these were drilled in my head over and over. He was intense but never mean. Rob had high expectations but never unreasonable, ok maybe sometimes…

It’s funny though I didn’t really “see it”  until he promoted me to the Brass Plum Shoes Buyer job. I appreciated the faith he had in me and I wanted to make him proud. I took a lot of notes and asked even more questions. Some of the visits were brutal. Especially when his face started turning red, lol. But I learned a ton and am forever grateful.

After a brutal visit there was always the kind, nurturing mentor I learned from. He had a big heart in that way. He would flip into some sort of “super hero” and all the knowledge he learned over the years he would try to coach and teach. Sometimes he’d talk so fast trying to get it all out I’d have to tell him to slow down.

We had our moments though, I remember one day he came in and said “we need to look at your PO book because you’re way fuckin’ over bought.”. I stopped dead in my tracks, turned around and said “well maybe if you’d stop fuckin’ buying stuff and not telling me, we wouldn’t have this problem”. He looked confused, so I showed him dozens of PO’s he wrote that I flagged because he didn’t tell me. “Yeah but it’s all good stuff” he said with a boyish smile. We had a good laugh over that.

When I say my Mentor Rob’s influence, its really how he’d go over how to identify the 80/20 styles and how to take smart risks. This got me to see the big picture. He usually referenced his time in Valley Fair and how he grew that business.  I pretty much did a lot of things he’d tell me from his “old days” as a buyer and it worked out great for me.

Thats why I had sections of Doc Martens, Converse All-Stars, Guess western booties and many, many more great items over the years. I used this philosophy and coach my buyers to do this today.

His personality sometimes was larger than life. If he took over being the floor watching duties it was pure showmanship. It was a site to see and I loved every minute of it. Even better was at the bar later. I learned the hard way you don’t try to keep up with Rob and to count your drinks or your next day could be painful. But it was always a good time.

I had the good fortune to work with Rob many years later at Zappos in 2004 and we had just as much fun. It was a proud moment for me to show him what I learned from him and how important he was in my growth as a buyer.

People like Rob and my other previous mentors like Gail and Martha come once in a lifetime. The key advice is to listen. I can only hope that someday far in the future an Old shoe dog will remember me this way.