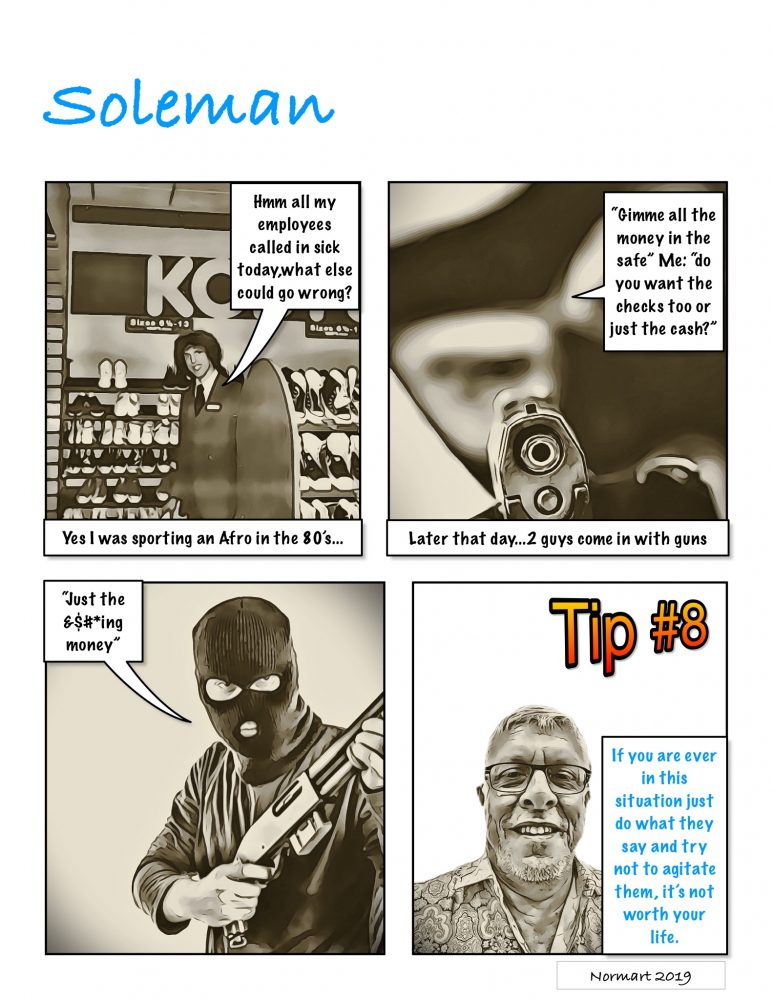 “Keep calm, use your head”

So, in Blog #7 talked about focusing on solutions and not the problem when the problems are overwhelming.

In this blog, I want to talk about one of the scariest things I’ve ever gone through.

It was the middle of the week (Wednesday night)  and the salesperson who closed (called the “closer”) called in sick. The salesperson who worked mornings said she could stay and close for me,  but I wasn’t allowed to pay her overtime. Then there was this other salesperson who couldn’t work that day. Plus, we had just let someone go. I ended up being short help.  So, I had to stay by myself to to close the store. 12 hour days weren’t uncommon in this job,  so it didn’t feel like a big deal to me.

Around 7pm it was pretty quiet  with no customers, and this nicely dressed guy came into the store. He nicely asked for an application. Since we were hiring, I gave him an application. Then, he sat down to fill it out. It seemed as thought he was taking an abnormal amount of time to fill it out, so my inside alarm inside of my head started to sound off. My instincts were right! The hairs on the back of my neck stood up straight when another guy wearing a long trench coat walked in and strolled to the back of the store.

My mind started drifting off to some local news event where a robber put everyone into a back room bathroom and shot them all dead! It was a brutal crime that is yet unsolved.

My anxiety was at a breaking point; kind of like when the biggest guy in school wants to fight you. Your heart sinks into your socks and your body is numb with fear.

“Uhh excuse me?”The applicant was calling me to turn in his application. “Am I over thinking this?”, I thought to myself. So, I went out to greet him, and with relief I didn’t see the other guy in the trench coat anymore and he asked me about the job.

As we were talking, the applicant pulled out a 38 revolver and said he wanted the money in the safe! The other guy appeared out of nowhere with a sawed off shotgun he pulled from his trench coat. They both had their guns pointed at my head so there wasn’t anything I could do. I told them to come into the back of the store with me, because a cop could see them from the street. I don’t know why I was coaching them on how to rob me properly, (now looking back, don’t ever say that..) but you do strange things when you are scared for your life.

We went to the safe. My mind wasn’t able to do the combination correctly, and they weren’t patient at this point. Finally, I dug deep to unscramble my thoughts, and opened the safe with shaking hands.  I looked up and asked if they wanted the checks, too. Seriously?  why did I ask that? Blame it on me being young and stupid; or too much TV influence.  They said,” just give us the f@&$’n money or we are going to blow your head off!”. …So I did.

After they had the money they took me to the back bathroom…(oh no! not the bathroom!) All I could think of in that moment in time was why did I wear these stupid Angel Flights pants? (the rage back then). They are going to find me tomorrow all shot up in these stupid pants and a large Brady Bunch looking Afro. I then started having the cheesy flashback film of my life and was thinking there is so much more for me to do still…and these are the damn pants I wore?

They put me into the bathroom, closed the door and I could tell they were trying to unsuccessfully prop a chair under the door knob so I couldn’t get out, I was looking for a way out or anything I could use to save my life, then the door opened…

“Gimme your license” he said,  “if you go to the police and rat us out we will find you and kill you…” I said “you aren’t going to kill me now?” And I’m not sure if he said this back to me or not but I heard “ not in those pants” ok he probably said stfu.

About an hour later I called the police and then Dave. Whew…I survived it

So here’s Tip #8: Sometimes it’s hard to figure out the “best way” to deal with this. In modern times run, hide, fight is the answer. Looking back , I should have run out the back door. I certainly shouldn’t have told them how to rob me or asked them if they wanted the checks and finally if they were going to kill me. Maybe in a weird way that’s what saved me. I do know in times or situations like this you have to dig deep and be calm and use your head.