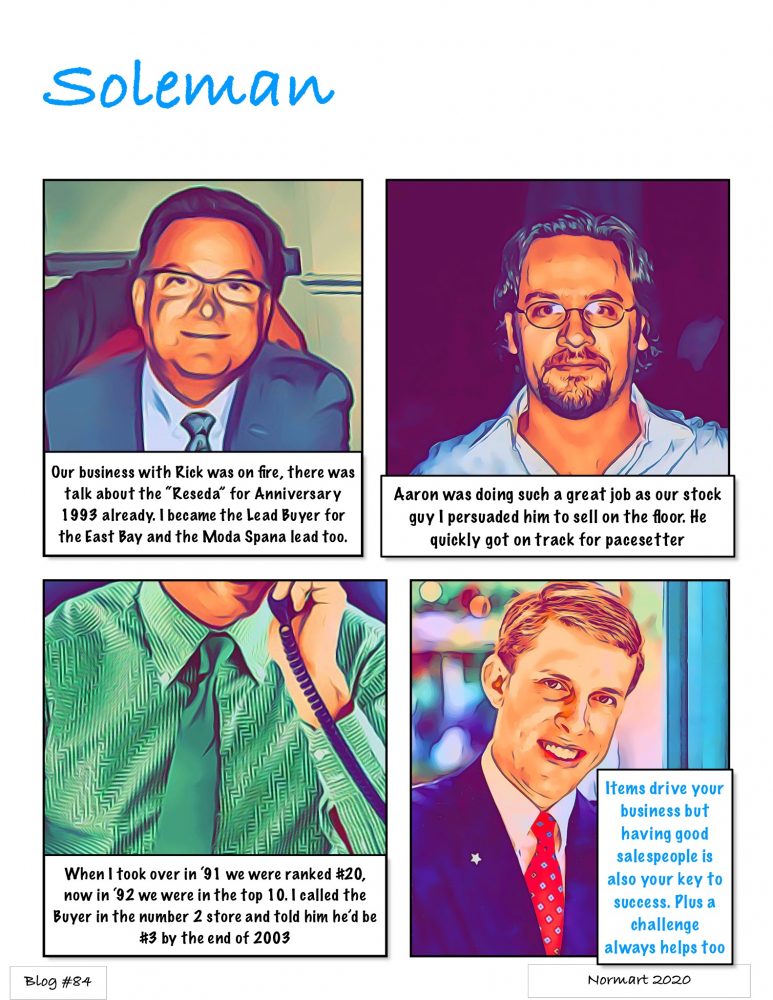 “You don’t build a business. You build people and then people build the business.”

In Blog 83 I talked about focusing on three important tenets. In this blog I wanted to talk about building a team.

Our business with Rick & Moda Spana was on fire. There was also talk about the “Reseda” style being an Anniversary selection. Rick agreed to expand the size selection to more colors, which would be perfect for the Anniversary event. I became the “Lead Buyer” for the East Bay region which meant I helped coordinate the direction for our three stores. I became the Moda Spana lead for all of  Nordstrom as well. Each lead took a brand to be responsible for.

Meanwhile we were developing quite the team. With so many positive things going on with the selection that was available, I wanted to make sure we had the team to sell it. Aaron, who was our stock guy and I would have very in depth conversations in the back room. I kept thinking to myself, this guy should be selling…

I approached Aaron the next morning and told him how much he could make on the floor. “I’m just a roofer from Wisconsin” he said. I explained to him how he knew the merchandise better than anybody on the floor and how he could make twice what he’s making now. “Why don’t you try it for a day”. His first customer was a very attractive and flirty woman. The whole team was watching him sell to her. He was great!

As he was putting his shoes away, I grabbed him in the backroom. “What do you think?”. “I think I’m going to like selling on the floor, he said with a big grin. I was right about him, if he was a machine in the backroom he was an amazing salesperson on the floor. He quickly got on pace for the Pacesetter program.

Now I just need a few more like him, I thought. I mentioned before when I took the job in 1991 we were in the top 20 in overall volume. Now this year because of the mix of hot items and building a great team of people we were in the top 10. I threw the gauntlet down to the #2 store and we were quickly catching up to them hitting the #2 spot each month more frequently now.

The # 1 store was so far ahead of everyone it would be a miracle to beat them, so we were ok with being #2. The team really enjoyed the competition and it was exciting to see the monthly reports on how well we were doing in the company. So we had a meeting and I asked everyone to shout out “We’re #3!”.How does that sound? I asked. Lets beat those guys! Lets hit our goal and be #2 in the company!

We were deep into the challenge now…