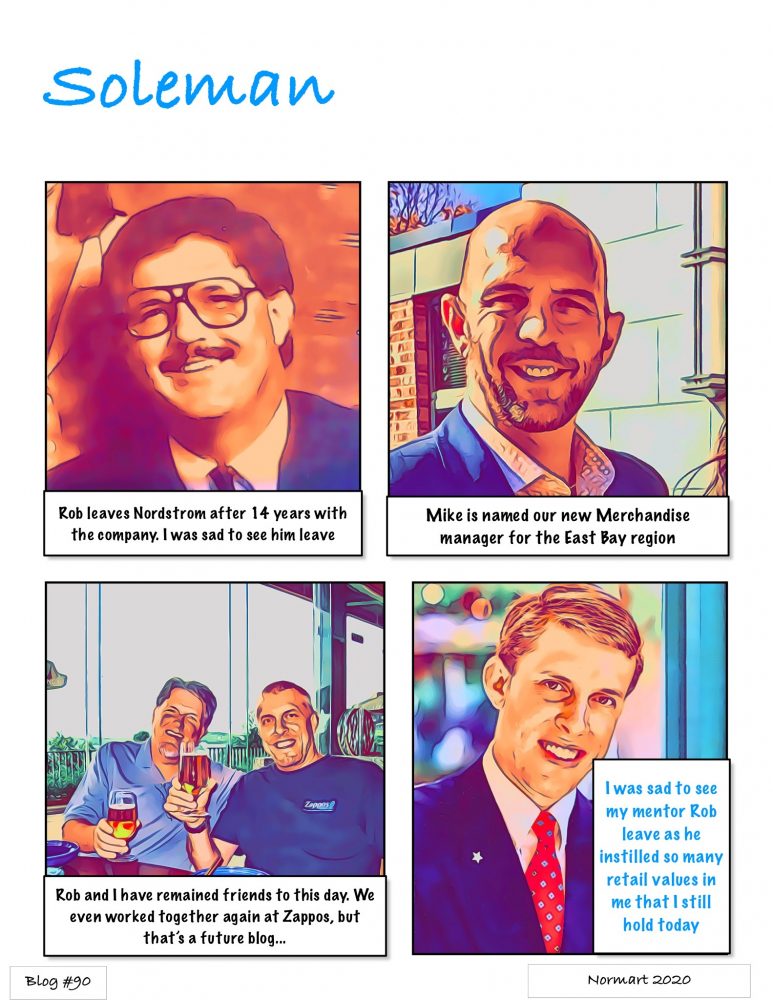 In Blog 89 I talked about an event we did that showcased sizes under 5 and over 10. In this blog I wanted to talk about my mentor Rob leaving the company.

Rob’s father passed away so he took off to be with his family and handle the arrangements. Things in the department were going well. Candace was becoming a really good 1st Asst. too. The team respected her and she was strong. We had some pretty big personalities now that people were selling so much more. Half our floor were Pacesetters so imagine 50% of your team being A-type personalities.  She handled it well and I sure appreciated her being there.

Not too long after Rob returned he announced he was leaving the company. It was a shock. He taught me so much over the years I was really sad to see him leave. He had knowledge and charisma. What a combo. Rob was a no nonsense kind of guy. You never doubted where you stood with him. It was good and bad lol. The things that would sometimes come out of his mouth would make you laugh then think.

If you were not prepared for one of his visists it would be a long day for you. Imagine going against a dictionary. Thats why he was dubbed “Retail Rob”. He was sharp when it came to running a good business. He was great at explaining it though. He took the time you needed to go over every little detail to be successful and I am forever grateful.

Another thing I learned from Rob, is there are a few people in life you have to count your drinks with. I learned that lesson the hard way. We went to an out of town meeting together and the night before the meeting we got hammered together. What made it worse was we roomed together so no escape. The next day I was pretty hungover and he was chipper as always. At one point I had to duck out as I was going to get sick. I got through the day but it was rough.

I learned the 80/20 rule in detail. I heard about it a lot in other jobs but Rob taught me how to make it work for real time. Narrow and deep was his mantra. Have your key items in stock, always…Placement on the floor was also something I learned from him. Get the customers to come into your department. The people thing was mine though, I really didn’t understand it until my next job however.

So Rob leaves a few weeks later and there was talk about a few candidates to take his place. Finally we get the message a guy named Mike is coming from southern California. He had been successful as a buyer over the years and was well liked. I met him a few weeks later in the regional office and he seemed like a great guy.

Rob and I crossed paths a few times over the years and have remained friends. We got to work closely together many years later during my Private label time at Zappos. We travelled the world together and built a pretty good program. We talk frequently and I still bounce ideas off him. Mike is also someone I have remained friends with and oddly enough all of us are in the same fantasy football league.

Mentors can come and go from your work life but the bonds you create can last a lifetime. I feel so fortunate I’ve had so many great mentors turn into friends and in a lot of cases are still mentors to me.