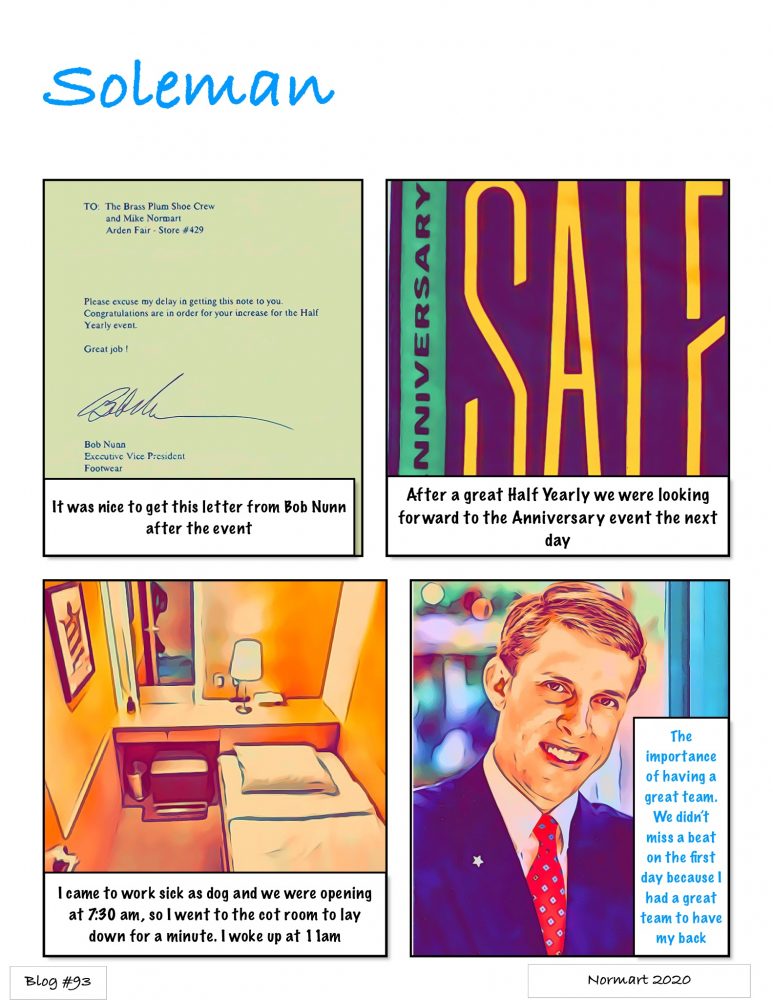 In Blog 92 I talked about being too political during Store visits from corporate. In this blog I wanted to talk about how my team had my back during an event

We received a nice letter from Bob Nunn for our Half Yearly results which I shared with the team. It’s always nice to be acknowledged and more importantly to share with your team. Afterall it’s a team effort. Next was the big Anniversary sale. The very next day after the Half Yearly sale ended we started our prep work.

This sale was different as it was a “Fall Preview Sale” which meant way more volume. We had the right mix of items this year so I knew we were going to kill it. In the Brass Plum Department, or “Juniors Shoes” we had the hottest trends in the market. While the Women’s department did more volume than us we were equally as busy as most of our price points were lower.

So we had everything dialed to have a great event. The back room was spotless, the merchandise was organized and signed so people from the Women’s side could sell our stuff too. Now we just had to open the doors and be ready for a lot of hours to work. These sales it was common to pull “rounders” every day. At least the first week. A rounder is open to close.

The big day was finally here, only one problem. I woke up with the flu. I was so sick it was crazy. I dragged my weak almost half lifeless body to the store. I got there early to make sure everything was set and ready to go. My management team was there early too. We had our White Mountain rep show up to help named Bob and he was the first one to say “Michael you don’t look so hot”. They made me go rest in the “cot room” which was basically a small room with a bed for people who needed to rest.

I had a temperature, and I couldn’t keep anything down. I was a mess. I was so sweaty it was gross. I passed out and didn’t wake up for hours. It was 11am in the morning and I bolted up and thought “Oh crap Jean laude is going to kill me”. Everything was cool though. Water was my friend that day and the team was so great at having my back. Bob even helped watch the floor for us. We had a great first day, even though for me it started out really rough.

Too often we think its “Our department” when in reality, it’s the teams. Yes we run it and make a lot of the decisions but this is why its so important to have a great team. We didn’t miss a beat that day. Everyone stepped up and gave a little extra. I was so proud of everyone, I think it made me feel better. That was good medicine…