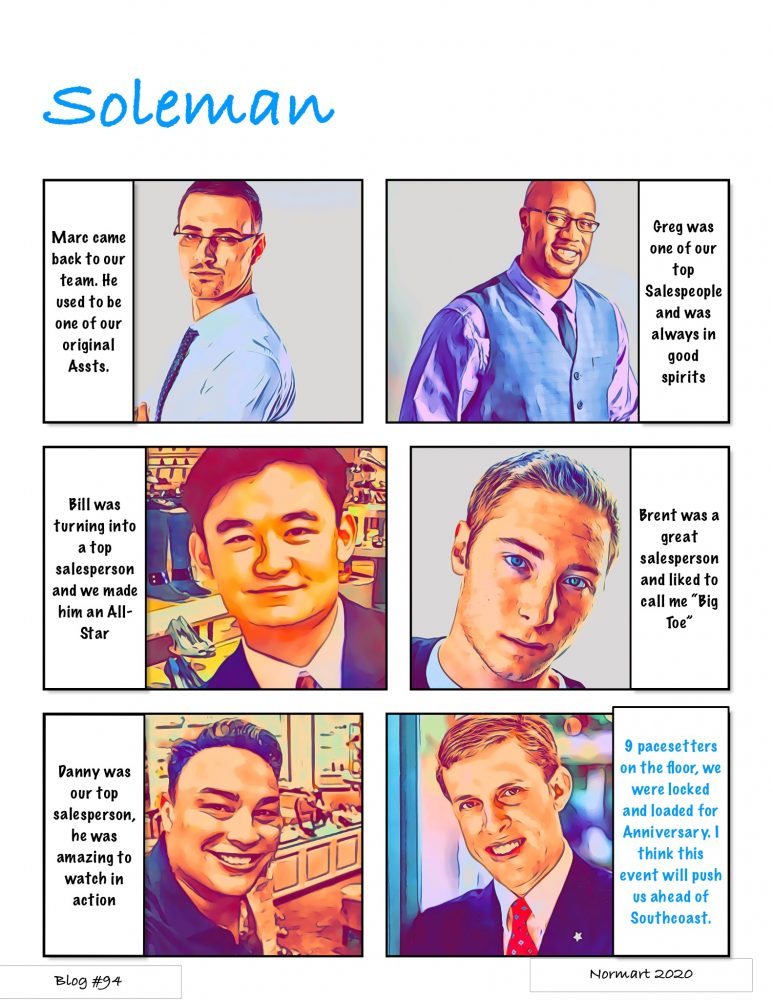 In Blog 93 I talked about how my team had my back during an event. In this blog I wanted to talk about the impact of having 9 Pacesetters had on our business.

In Blog 93 I talked about how the team had my back when I was sick with the flu on the first day of the Anniversary sale. We had about 20 people now as our business was growing and we needed the help for the Sale.

Marc decided to come back to the department after being gone for a few years. He was one of the original Asst’s when the store opened. He had an amazing personality, you instantly liked him. He was funny and great with the customers. He was always dressed impeccably. He came later in the year so it would be a challenge for him to make pacesetter this year but he was putting up Pacesetter numbers. He was a great ambassador for the department too.

Greg was one of our Pacesetter/Allstars. He was very soft spoken and incredibly genuine. He was great with his customers and was  very dependable. His sales were very steady which was also his character, steady. He had a great sense of humor, always kidding around and lots of smiles. He was a person you just liked to be around.

Bill was quickly becoming one of our All-Star salespeople. He had it all, he could sell and give great service at the same time. So much so we made him an All-Star. For the honor the salespeople would receive a bigger employee discount and special business cards. They would also get their photo placed in the Customer Service All-Star section. Bill, Aaron and I became pretty close in working so many hours together. Bill would do anything for us, volunteered to do the workbench and any other extra thing he was always there for us. Bill is still working with me now except at Zappos.

Brent was a speedster on the floor. He could help two or three people at a time and not miss a beat. The customers loved him as he was really personable.  He was a given for Pacesetter this year. He outpaced the Pacesetter goals they had each month. He fondly called me “Big Toe” and had a great laugh when he did it. He was funny and down to earth at the same time.  He was hard not to like

Throughout my career at Nordstrom I met some of the best salespeople around. In fact in a future store I had 5 people on my floor that were in the corporate top 10, 2 in the top 5. Danny was this type of person for the Juniors area. He was charming, dressed well and very handsome. He could sell anything to anyone. He gave really good service too.  We were very fortunate to have him on our team.

I had mentioned before some other Pacesetters like Alberto, Mike and our Asst. Aaron. We had a dream team for sure. All in all we had 9 now out of 20. It was a great recipe for success. Especially since some of them were also All-Stars. So we had great service and people who could sell. We had a great team of assts too. We were primed for success…