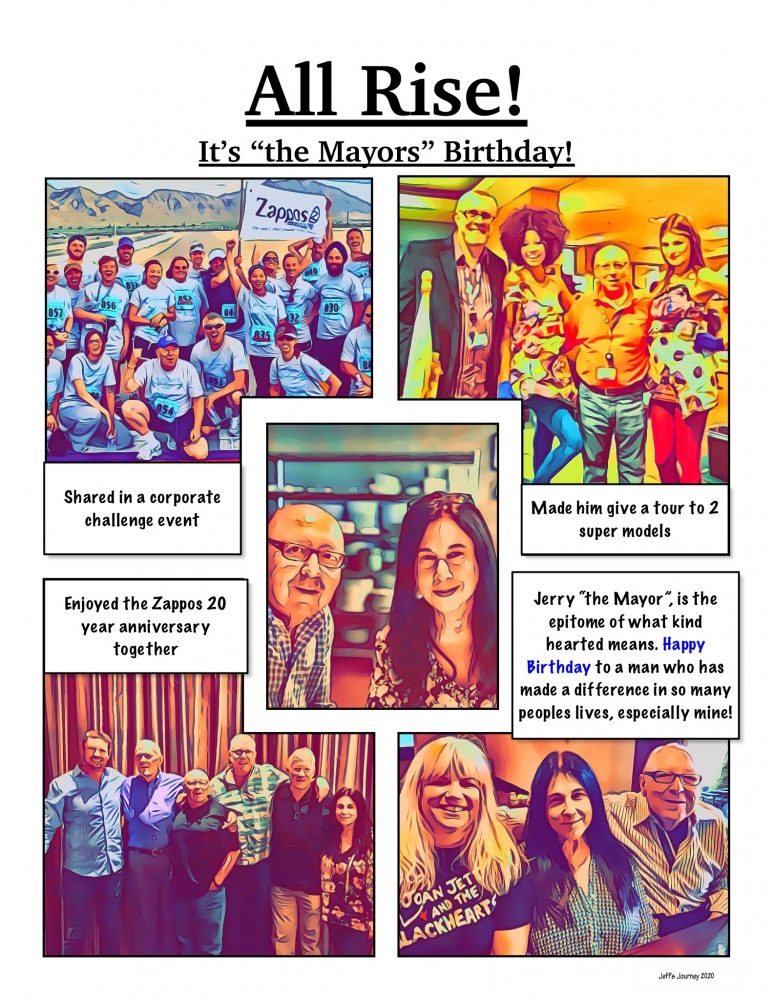 “The best way to find yourself is to lose yourself in the service of others.” ~ Mahatma Gandhi

Even though I haven’t started writing my stories of Zappos in my blog I thought this was appropriate as it’s Jerry’s Birthday today. So this blog is dedicated to Jerry.

I’ve known Jerry since my Nordstrom days and he did work in Nordstrom Arden Fair at the same time as my blogs I’m writing about now, so its kinda legal.

Every once in a while a person comes into your life that really makes a difference. Jerry is such a person. Not only for me but the hundreds of people he has had contact with over the years.

Service with a smile

It’s definitely a motto of a lot of people out there. With Jerry it’s a lifestyle. He combines humor with a sharp wit that makes you love the guy. It was that way at Nordstrom and so much so at Zappos, he was crowned the “Mayor of Zappos”. He was in charge of the help desk and was the epitome of service. “Help desk this is Jerrrrrry” he would often say. It was a Zappos standard. Everyone who came in to the Lobby felt they were the most important person there.

Jerry had a way of making people feel special. He had a team who also had the same mentality. Goes back to some of my previous blogs on how important a great team is. It takes a leader however to recognize that.

I remember when I was going through my divorce and dating some lets just say, interesting people, I had a few drinks and attempted to drive home. 1st mistake. I mis-judged a center divider and both my tires blew out. 2nd Mistake. I was in the middle of a lonely road and didn’t know what to do. “I think I’ll call the help desk”, I said to myself. “Help desk this is Jerrrrry” I heard on the other side. Told him my situation and all of a sudden he turned into “the Wolfe” from the movie “Pulp Fiction”.

He was there in a flash, don’t remember all the details but he saved me that night. Mostly from myself lol.

When a company decides to “brand” themselves as a service company much like Nordstrom & Zappos,you need to walk the talk. Good people to carry that brand forward is critical. Jerry was that guy for both companies.

He was always in a good mood. Even when he wasn’t…that’s a talent right there. He also knew how to gauge different people and spoke accordingly. For me it was the off the wall humor crap. “Mike, do you like to watch movies about Gladiators?” he’d say out of the blue referencing the “Airplane “ movie.

I remember when I was writing stories for a Shoe blogger she had two super models come to Zappos. Jerry was such a great ambassador for our company. He showed them around, made them laugh and generally had a good time. I know he hated every minute of it as did I. They were so beautiful and really nice too.

He always made me smile. He was stationed in the lobby but his desk was in front of “Monkey row” where Tony and the rest of the zappos Merch execs sat. He put in some wood flooring for his desk area and encourage people to eat peanuts and throw the shells on the floor.

When we were planning our 20th Anniversary, Steve Paun (who was heading up the planning of the event) made it a point to bring Pam n Jer to the event after they both retired. He made it very special for both of them. “What’s a 20th celebration without the Mayor of Zappos” Steve would say. It was a great time seeing them in Vegas again.

Jerry taught me the importance of not taking yourself so seriously. He taught me to enjoy life and not to lose the humor of it all. Even today, he is the same guy, with the same corny lines and same sense of humor. I love this guy! Happy birthday to a man who has made a difference in so many lives including mine. Well done Mr Mayor, Well done!