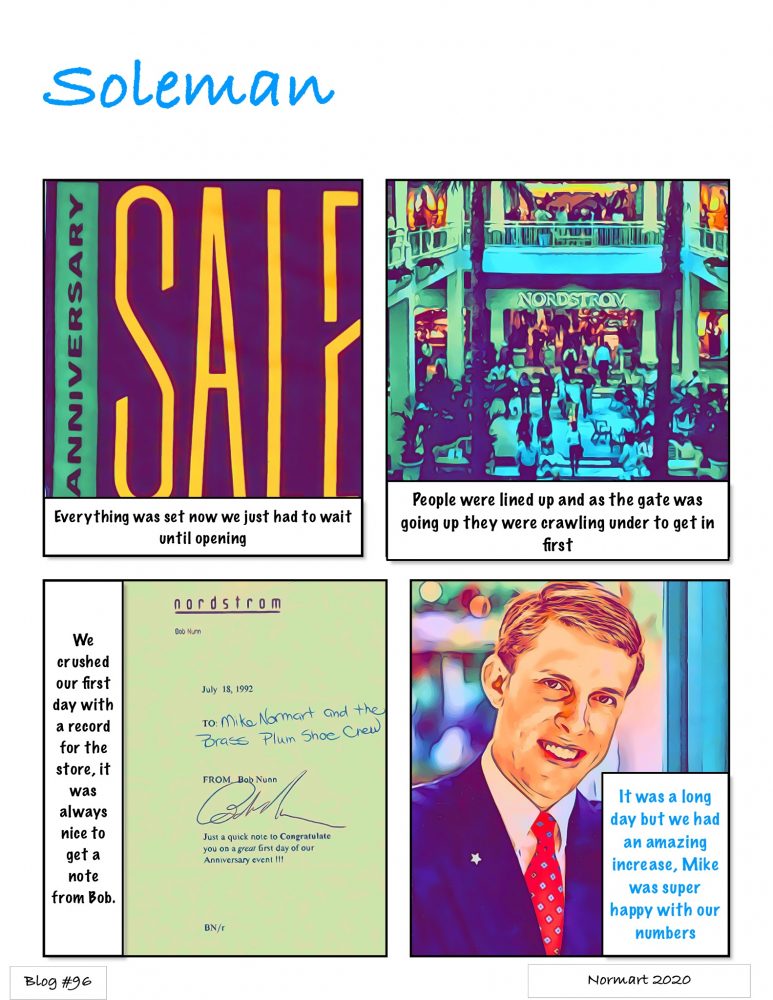 In blog 95 1/2 I talked about Zappos Mayor Jerry and our relationship together and the impact he had on so many people. In this blog I wanted to circle back to where we were before and re-cap the Anniversary event.

The Anniversary event in the 90’s was a Pre-Fall sale. As a buyer we would pick hot items for fall and put them on sale for a few weeks. It was always the biggest sale of the year. We would start planning for this event usually the fall prior to the sale.

For this particular event there were a lot of things going on. We were closing in on the number 2 spot for the Juniors area (Brass Plum Shoes). I had an amazing team of 9 people on track for Pacesetter. We had a solid Asst. Manager team which pulled it all together. And I was growing in my position as well.

We had a Merchandise manager change which was tough at first as Rob was my mentor. Mike was a great replacement though so it all worked out.

So here we are about to open the gates and I’m sick as a dog. The only thing I remember as we were opening the gates was people were crawling under the gate as it was going up. It was crazy, but amazing at the same time. It was instantly bedlam but I had to go lay down for a minute.

A few hours later I was back on the floor and surprisingly ok. The Asst. Team had the floor handled and our Rep Bob was helping them out. As I was coming down the escalator I could feel the adrenaline going through my veins, giving me such needed strength to get through this day. It was a great feeling to see all the stuff we had planned come to fruition. Our sales were off the chart and the sales team were having a lot of fun.

Seeing Danny in action and Brent zipping through the crowd and calling out “How you feeling Big Toe” as he went into the back stockroom, gave me the energy I needed.

We had so many people in our department it was kinda funny in a weird way. WE WERE SO BUSY! I ended up staying late as did everyone and when it was over we all looked at each other with tired smiles. We did it. We knocked it out of the park. Funny thing was we had to do this for the next few weeks. We worked hard to get the department back in order and straighten the stock shelves in the back before we left for the day.

Mike called the next morning and said “You killed it!”. He was super happy with our results. A week later Bob sent us a nice letter to congratulate us on a great first day. It was one of the best events of my Nordstrom career.