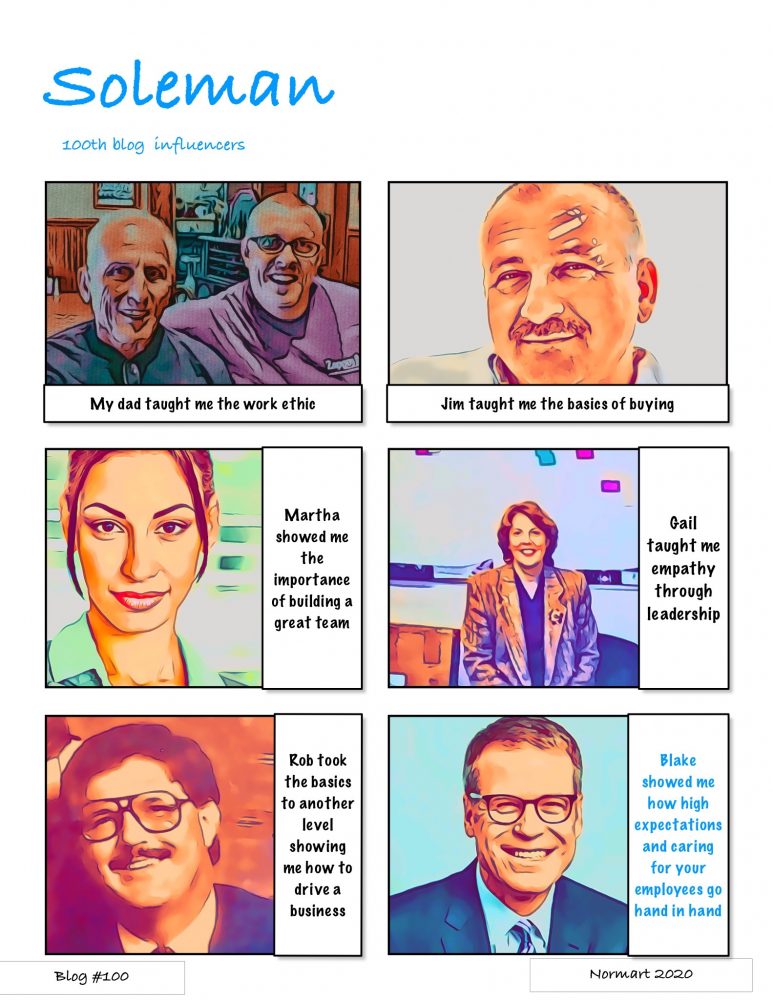 In Blog 99 I talked about how we ended up the year being number 2 in the company for Brass Plum Shoes. In this blog I want to talk about how my influencers got me there

It starts with a foundation. My dad taught me the importance of being proud of the work you do. You don’t necessarily have to work the hardest but work smart. Early on it was attention to detail. If I mowed the lawn, don’t miss a spot. If I washed the cars, buff out the chrome and make sure the windows were clean inside and out. When I started in retail it was “look in the mirror before you leave”, is this how you want to portray yourself. With all my influencers my father had the most important influence over me. All the others enhanced me, he set the foundation. I miss him…

Jim was the first person to really take me under his wing and show me the ropes. I was one of his store managers but he taught me the art of buying. Being an independent owner there were financial consequences to buying too much or too little, so it was a great foundation for buying. He also had a warmth about him. He treated me like he would his own son. Very calm and very proud when I did well. He would have me come over to his store when we did the buys. The reps would lay everything out and he would explain the whole process. In those days we put everything on a paper spreadsheet to make sure we had everything covered. From styles to colors it was very well thought out. My times have changed…

Martha was amazing. She was very strong. She ran a tight ship and everyone respected her. She had high expectations and she followed through on everything. She developed a great team too. It was the first time I was around  “Professional” shoe people. Not that Jim wasn’t professional but these people had fine clothes and handled the customers in a very professional way. Martha expected this of her people. She had a great Asst. in Michael so she knew she could count on him to protect her business. This was also very important and I’ve carried this with me my whole career. Top to bottom Martha was hard to beat. I have tremendous respect for her and what she taught me.

Too many times I’ve witnessed from people Not on this list the lack of empathy. Gail was great at this. You really felt like she understood you and your feelings about things. I really felt like I wanted her to be proud of me. I was in an area I wasn’t comfortable with and buying for the department at that. She calmed me down and I feel because of her, it rounded me out. I really fine-tuned my buying skills because of this. It taught me to think outside the box because I had the confidence she had my back. I used a lot of these skills in bigger jobs I eventually had at Nordstrom.

Basics…Back to basics…Volume…All things I learned from Rob. “Narrow and deep Mikey boy”. I heard that so many times it became my mantra. I knew a lot of this stuff already, but he taught me how to make it work for me in a big way. One of the best years I ever had I attribute from his training and coaching. I took chances, I hired the best people and had high expectations. All these things came to a culmination from all my influencers, he just expected it. He was very unorthodox. Somewhat comical. But if you pissed him off, boy it was rough. I kept that to a minimum. We became good friends through the process. A lot of my style today has his imprint.

11 years at Nordstrom. It was amazing training. From Martha, Gail, Rob and many others, there was a common thread. High expectations. When Blake would come to the store, everyone beforehand was running around like the President was coming. OMG everything has to be perfect. My favorite stories were how people would trip out over the black polish thing. We don’t have black polish! Go to another store and buy some! I never had that problem especially working for Rob, where basics were the policy.

Blake came in one day and we were dialed. Aaron made sure we looked good and I was walking the floor with Blake and when we stopped, I asked him why black polish was such a big deal for him. I think people were in shock I had the guts to ask him that. “If a store is out of a simple basic, like black polish, you know you need to dig further” Blake said. Wow so simple…but it made so much sense. I had a great relationship with Blake even after I left Nordstrom. He had a way about him that you knew he cared about you.

Many years after I left he contacted me to invite me to a “Shoe Dog reunion”. Unfortunately I had plans with my team so I had to decline. We talked about our families and the holidays like we were best friends. I was very sad when he passed away. I felt a part of my career left that day. He was one of a kind and sorely missed. I think about him and what he taught me quite often. It always puts a smile on my face.

With this being my 100th blog I thought it appropriate to write this today. I have been fortunate to have so many great people influence me over the years and there are a few more to come. But that’s for a future blog…